TNFRSF9: A Potent Immune-Stimulator in Cancer

Last month, a study published on Nature Communications pointed that combining TNFRSF9 agonists with PD-L1 increases anti-tumor activity [1]. In recent years, TNFRSF9 has received much attention as a therapeutic target for cancer and a variety of autoimmune and inflammatory diseases. Recent studies, however, suggested that the biology of TNFRSF9 and its ligand TNFSF9 are more complex, mainly due to bidirectional signaling between them. TNFRSF9 as a attractive biomarker, the specified mechanisms behind it spark an interest among researchers. Thus, what signaling pathway does TNFRSF9 mediate? What is the potential value of TNFRSF9-targeted treatment? Today, let’s learn more about it.

1. What is the Structure and Expression of TNFRSF9?

4. The Role of TNFRSF9 in Cancer and Autoimmune Diseases

6. What Reagents You May Need for TNFRSF9-Targeted Research?

1. What is the Structure and Expression of TNFRSF9?

TNFRSF9 (also known as ILA; 4-1BB; CD137; CDw137) belongs to the tumor necrosis factor (TNF) receptor superfamily. TNFRSF9 is a type II membrane glycoprotein with a molecular weight of 30 kDa [2, 3]. Two forms of TNFRSF9 exist due to alternative splicing of the TNFRSF9 transcript, but little is known regarding their function. One form is the fully functional transmembrane protein while the other is soluble that lacks a transmembrane domain and is secreted by the cells [4]. Human TNFRSF9 resides on chromosome 1p36. As shown in Figure 1, human TNFRSF9 contains 255 amino acids with two potential N-linked glycosylation sites. Hydrophobicity analysis suggested that amino acids 1-17 were a putative signal peptide, which was followed by an extracellular domain of 169 amino acids and then a transmembrane region of 27 amino acids between positions 187-213, and finally a short intracellular domain of 42 amino acids. The residues in the cytoplasmic domain are consider to be important for TNFRSF9 functions [5, 6]. 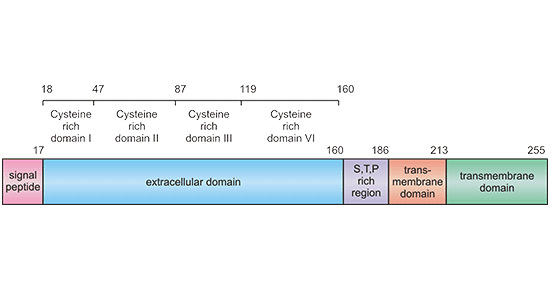 *This figure is derived from a Cancer Gene Therapy publication [6]

TNFSF9 is also named as 4-1BB ligand or CD137 ligand, which is a type II glycoprotein with a mass of 34 kDa [8, 9]. It has been identified as the ligand of TNFRSF9 through an expression cloning approach. TNFSF9 is expressed on the surface of activated T cells, macrophages, monocytes, dendritic cells, B cells, and B lymphomas. TNFSF9 can be shed by metalloproteases from the plasma membrane and function as a soluble ligand, whereas its role hasn’t been well-understood (Figure 2) [10]. 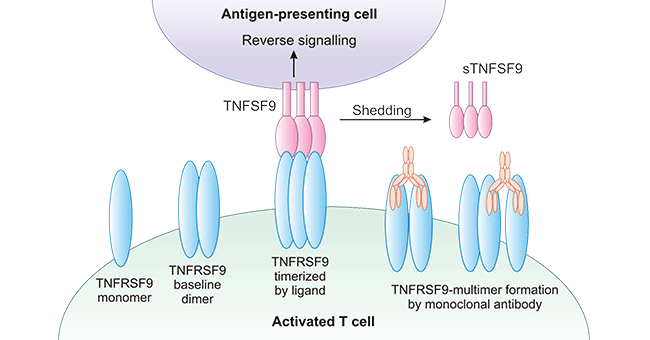 TNFSF9 has been found to send reverse signals to the antigen-presenting cells (APCs) upon TNFRSF9 engagement, which increase the antigen-presenting capacity. In addition, multiple studies have defined TNFRSF9 as a co-stimulatory molecule for T-cell activation, which is triggered by TNFSF9 ligand (Figure 2). Intriguingly, it has been found that TNFRSF9 and TNFSF9 have revealed the diverse and paradoxical effects of these two proteins in various cancers, autoimmunity, infections, and inflammation [11]. Both their cellular diversity and their expression patterns indicate that they mediate complex immune responses.

As mentioned previously, the binding of TNFRSF9 with TNFSF9 contributes to the TNFRSF9 activation and initiates a complex set of intracellular signaling pathways. As presented in Figure 3, TNFSF9 is expressed on APCs, B cells, macrophages, and other cell types, which binds with TNFRSF9 to induce diverse signaling through TRAF1 and TRAF2 [13]. These signaling pathways promote the expression of survival genes including Bcl-2, Bcl-XL, and Bfl-1 and inhibit the expression of pro-apoptotic Bim [14]. Nevertheless, crosslinking of TNFRSF9 with TNFSF9 induces various immune responses involving both adaptive and innate immunity. Because binding between TNFRSF9 and TNFSF9 on various cells can trigger bidirectional signals, it is difficult to dissect the individual effects of them [15]. 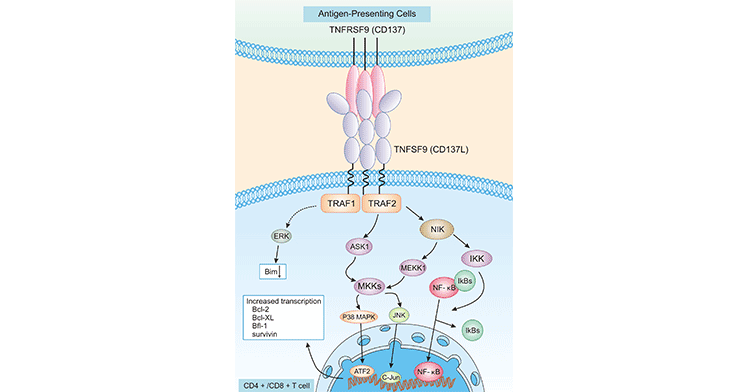 As mentioned early, TNFSF9 could activate ligand-dependent signal transduction pathways, also called “reverse signals” that elicit reverse signal-induced cellular responses [16]. TNFSF9-mediated reverse signals can be as diverse and complex as TNFRSF9 receptor signals. TNFSF9 has been identified as binding candidates of proteins and kinases related to ubiquitination, adhesion, and endocytosis [9]. There are lots of hypothesis in terms of TNFSF9 reverse signaling mechanism. Besides, murine reverse TNFSF9 signaling is very different from human reverse TNFSF9 signaling. It is currently not known the specified associations among them. Some researches pointed that the TNFSF9 reverse signaling pathways in human cells involve Src tyrosine kinase, PI3K, p38 MAPK, ERK1/2 or NF-κB [17]. In murine macrophages, crosslinking of TNFSF9 increases tyrosine phosphorylation of PP2-sensitive tyrosine kinases such as Src [18]. Taken together, TNFRSF9 and TNFSF9 involved in diverse regulatory mechanism, the specified in various cells has not been well-defined.

4. The Role of TNFRSF9 in Cancer and Autoimmune Diseases

Although it is difficult to systemically dissect the complexity mechanisms between TNFRSF9 and TNFSF9, it is clear the complexity of the molecular interactions gives rise to the immunity required to protect us from the many menaces, and that derangement of the interactions may lead to hypo-or hyperimmune status and to immunopathogenic conditions such as infective inflammation and autoimmune diseases. Notably, TNFRSF9 is believed to be important in cancer biology, which has provided interest in developing TNFRSF9 cancer immunotherapies.

In a number of solid tumors, TNFRSF9 was not detected on the cancerous cells, but rather, on the cells of the blood vessel walls in these tumors. A study involving immunohistochemical staining of frozen tissue sections found that 32% of malignant and 14% of benign tumor tissues contained blood vessels that stained positive for TNFRSF9. In contrast, none of the paired normal tissues contained blood vessels that expressed TNFRSF9. Tumor tissues containing TNFRSF9-positive blood vessels included fibrosarcoma [19], nephroblastoma [20] and ameloblastoma [21]. A possible reason for the presence of TNFRSF9 on tumor blood vessels may be an increased ability to recruit monocytes to the tumor site. In recent years, it has been reported that TNFRSF9/TNFSF9 is closely related to the certain tumor like pancreatic cancer [22] and hepatocellular carcinoma [23], but it is not clarified their specified roles in the tumor development.

In some autoimmune diseases, researches found that the disruption of TNFRSF9/TNFSF9 signaling ameliorates the severity including herpetic stromal keratitis (HSK) and rheumatoid arthritis (RA), but increased the severity of lacrimal gland disease and systemic lupus erythematosus (SLE) [24, 25]. TNFRSF9 does not always exert protective functions in autoimmune diseases since it is involved in an extremely complex biological process. The specified roles of TNFRSF9 in human diseases remained to be determined. Therefore, the employment of TNFRSF9 antibodies or anti-TNFRSF9 antibodies might play a important role in the development of in tumor therapy or autoimmune diseases.

With the discovery of TNFRSF9 activities, the potential value of agonistic anti-TNFRSF9 for tumor immunotherapy became obvious. It is well accepted that enhancement of antitumor immune responses is the best characterized activity of TNFRSF9. The prevailing theory holds that TNFRSF9 agonists can be used for treatment of cancer and autoimmune diseases that are mainly mediated by CD4+ T cells, while TNFRSF9 agonists may worsen autoimmune conditions that are mediated by CD8+ T cells. Although most evidence supports a co-stimulation of CD8+ T cells by TNFRSF9 agonists and a potent effect in tumor immunotherapy, it is very challenging to predict under what conditions they will enhance or inhibit immune responses in patients. At present, TNFRSF9 agonists or antagonists have soaked up more ink and received more passion in recent years. As shown in below table, many TNFRSF9-based antibodies are currently being tested in clinical trials.

The TNFRSF9 system exerts many different activities. This is partly due to its bidirectional signaling capacity, and the expression of TNFRSF9 and its ligand TNFSF9 on many types of cells, immune and nonimmune cells. Several opportunities to interfere therapeutically result from this range of activities. However, a downside is many potential side effects. The most advanced TNFRSF9-based drugs are agonistic anti-TNFRSF9 antibodies. They are potent inducers of anti-tumor immune responses, however, on the other hand also inhibit autoimmune reactions. Given its dual function, which could raise major concerns for therapeutic applications until further mechanistic insights are obtained. Apparently, more data need to be generated in order to be able to exploreTNFRSF9 therapeutic potential in tumor and other diseases.

6. What Reagents You May Need for TNFRSF9-Targeted Research?

[4] Luu, Khang, Zhe Shao, and Herbert Schwarz. "The relevance of soluble CD137 in the regulation of immune responses and for immunotherapeutic intervention." Journal of leukocyte biology 107.5 (2020): 731-738.