The Overview of Colony Stimulating Factors

In this section, we list the common colony-stimulating factors and corresponding receptors in the below Table 1.

The Member of Colony-Stimulating Factors

Unlike the other CSFs, CSF1 has the high levels in the blood and is ubiquitously and constitutively expressed in many tissues and by many cell types; the other CSFs are usually produced only after stimulation. For instance, GM-CSF and G-CSF are produced by stimulated haemopoietic and non-haemopoietic cells, and IL-3 is emerged by stimulated T cells and mast cells. The diverse receptor distribution and potential sources of the CSFs are key to the delineation of their separate biological functions and their potential roles in pathology.

The receptors for the diverse CSFs (as shown in the Fig.1) are quite different and are expressed on different myeloid populations. General speaking, each receptor is stimulated by a specific CSF, except for CSF1R, which binds to both CSF1 and IL-34.

The CSF1 receptor, also known as CSF1R, is expressed on monocytes and macrophages, and is the only receptor tyrosine kinase that is activated by two ligands of unrelated sequence - CSF1 and IL-34. The biologically active regions of CSF1 and IL-34 have similar cytokine folds in spite of sharing low sequence similarity. However, although existed similarities, the IL-34–CSF1R complex differs from the CSF1–CSF1R complex in many structural ways. 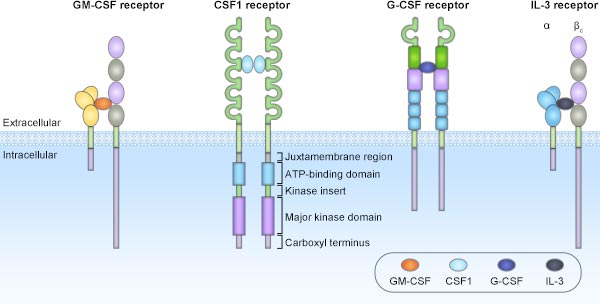 Fig.1. The structures of the CSF receptors

The G-CSF receptor, also called G-CSFR, is a transmembrane protein that has the largest expression in neutrophils, but G-CSFR is also present in other types of cell. Thereby, we cannot affirm that direct interactions with G-CSF only occur in granulocyte lineage populations. Besides that, ligand-induced dimerization of G-CSFR rapidly triggers numerous downstream signal transduction pathways, such as MAPK and PI3K-AKT signaling pathway[2].

The GM-CSF receptor (GM-CSFR) is expressed on monocytes, macrophages, eosinophils and neutrophils. The fundamental GM-CSFR subunit, expressed mainly on myeloid populations, comprises of a unique ligand-binding α-chain that contains three extracellular domains and a signaling β-chain. And this β-common (βc) chain is also a component of the IL-3R. Emerging evidence revealed that GM-CSFR engagement can active JAK-STAT, MAPK, NF-κB and PI3K–AKT signaling pathway[3][4] .

CSFs later became apparent that they could also affect more mature populations in these lineages, promoting their survival and/or proliferation, activation and differentiation, all of which could be relevant to inflammation. The effects of Csf gene deficiency in mice and of specific neutralizing monoclonal antibodies (mAbs) have spurred a reassessment of the roles that these CSFs have in steady-state haematopoiesis. Each of these CSFs can play a part in the host response to tissue injury and infection, which has potential implications for inflammatory and autoimmune diseases[5][6]. Roles for the different CSFs and their targeting, particularly GM-CSF and CSF1, are increasingly being investigated in preclinical models and clinical trials of inflammatory and autoimmune diseases. In this part, we will introduce the primary CSFs and inflammation.

CSF1, also known as Macrophage colony-stimulating factor (M-CSF), unlike the other CSFs, is present at high levels in the blood and is ubiquitously and constitutively expressed in many tissues and by many cell types. CSF1 is one of the most important substances known to affect macrophage physiology. The binding of CSF1 to its sole specific receptor, CSF-1R, stimulates the survival, proliferation, and differentiation of mononuclear phagocytes[7][8]. Among the various candidates, CSF1 is considered an important cytokine. The up-regulation of CSF1 and its receptor CSF-1R has been reported in brain disease, as well as in diabetic complications. However, the mechanism is unclear. An elevated level of glycated albumin (GA) is a characteristic of diabetes, thus, it may be involved in monocyte/macrophage-associated diabetic complications[9].

Inflammation involving vessels and neural tissue occurs early in diabetic retinopathy, while excessive and persistent microglial activation is believed a major contributor to the inflammatory responses. Microglial activation occurs via a complex regulatory system involving multiple signals. Accumulating evidences showed M-CSF is a key cytokine in the regulation of the microglial activation, proliferation and migration in CNS[10][11]. Moreover, the high-affinity binding of M-CSF to CSF-1R plays a role in mononuclear/macrophage-associated diabetic complications, including diabetic retinopathy. Wei Liu previous study provided the evidence that the vigorous expression of M-CSF/CSF-1R occurred in the early diabetic retina and a robust induction of CSF-1R was observed on the activated microglia[12][13][14].

Granulocyte–macrophage colony-stimulating factor(GM-CSF; also known as CSF2), particularly during inflammatory responses, can be produced by a number of both haemopoietic and non-haemopoietic cell types upon their stimulation. Moreover, the ligand can activate myeloid populations to produce inflammatory mediators. Therefore, GM-CSF is a multifunctional cytokine that acts at the interface between innate and adaptive immunity[15]. Adrian Achuthan et.al. have identified a new GM-CSF-driven pathway in monocytes/macrophages leading to CCL17 formation and with upstream involvement of JMJD3-regulated IRF4. This pathway was identified in both human and murine cells in vitro, and also in vivo, in the steady state and also during inflammatory responses. This pathway appears to be separate from the GM-CSF-driven pathway(s) in monocytes/macrophages, leading to expression of other key proinflammatory cytokines[16]. Moreover, Andrew D. Cook, et.al. previously identified a new GM-CSF→JMJD3→IRF4→CCL17 pathway that is active in monocytes/macrophages in vitro and important for the development in mice of inflammatory pain, as well as of arthritic pain and disease and suggested previously that CCL17 may be a therapeutic target in inflammatory conditions where GM-CSF is important[17].

granulocyte colony-stimulating factor(G-CSF; also known as CSF3), is a glycoprotein that stimulates the bone marrow to produce granulocytes and stem cells and release them into the bloodstream. Like GM-CSF, G-CSF circulates at low concentrations, but its levels are elevated as part of the host response to infection or injury. In vitro, G-CSF can be produced by many cell types upon addition of pro-inflammatory stimuli such as TNF, IL-1 or lipopolysaccharide (LPS). G-CSF is considered to be a key regulator of granulopoiesis by inducing the development of neutrophils from progenitors and by promoting neutrophil release from the bone marrow. The role of neutrophils in inflammation, even in chronic situations, is becoming widely recognized. Given that G-CSF is a key ligand that controls neutrophil numbers (through its pro-survival and trafficking regulation functions) and activation, it is likely to be crucial for many aspects of neutrophil function, thereby providing clues as to potential therapeutic indications. An important role for an IL-17–G-CSF pathway in the regulation of neutrophil homeostasis has been proposed, as IL-17 can regulate G-CSF levels, which has potential implications for anti-IL-17 therapies in development[18][19][20][21][22] .

#2 George DM, et al. have published one paper that named “Prodrugs for colon-restricted delivery: Design, synthesis, and in vivo evaluation of colony stimulating factor 1 receptor (CSF1R) inhibitors” in the journal of PLoS One, on 7 September 2018. The paper suggests that a suitable therapeutic index cannot be achieved with CSF1R inhibition by using GI-restricted delivery in mice. At the same time, these efforts provide a comprehensive frame-work in which to pursue additional gut-restricted delivery strategies for future GI targets. Please click here to view the report.

#3 Ashrafi F1, a researcher from department of internal medicine of Isfahan University of Medical Sciences in Isfahan, has demonstrated that G-CSF and biosimilar pegylated G-CSF are effective in reducing cytopenia in breast cancer patients treated with dose-dense chemotherapy, but side effects induced by pegylated G-CSF (Pegagen) are higher. Please click here to view the report.