What are Colony-Stimulating Factors?

Colony-stimulating factors, also abbreviated as CSFs, are secreted glycoproteins that bind to receptor proteins on the surfaces of hemopoietic stem cells, activating intracellular signaling pathways, then promoting production of white blood cells (mainly granulocytes such as neutrophils), in response to infection.

Administration of exogenous colony stimulating factors stimulates the stem cells in the bone marrow to produce more of the particular white blood cells. The new white blood cells migrate into the blood and fight the infection.

The members of Colony-Stimulating Factors

But in some extent, CSFs also involve erythropoictin (Epo) and thrombopoietin (Thpo) for their ability of stimulating the formation of red blood.

CSF1 stimulated macrophages, CSF3 stimulated granulocytes, CSF2 stimulated both granulocytes and macrophages, respectively. Unlike the other CSFs, CSF1 has the high levels in the blood and is ubiquitously and constitutively expressed in many tissues and by many cell types; the other CSFs are usually produced only after stimulation. For instance, CSF2 and CSF3 are produced by stimulated haemopoietic and non-haemopoietic cells, and IL-3 is emerged by stimulated T cells and mast cells. The diverse receptor distribution and potential sources of the CSFs are key to the delineation of their separate biological functions and their potential roles in pathology.

CUSABIO has been supplying CSFs to customers all over the world for more than 10 years. And we've got many good feedbacks. Here are some featured SDS-PAGE and activity assay images. 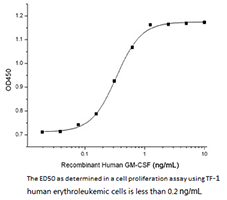 The function of Colony-Stimulating Factor Receptors

Besides the CSFs, their receptors also play a key role in the process of CSFs function. The receptors for the diverse CSFs are quite different and are expressed on different myeloid populations. Briefly, each receptor is stimulated by a specific CSF, except for CSF1R, which binds to both CSF1 and IL-34.

The CSF1 receptor, also known as CSF1R, is expressed on monocytes and macrophages, and is the only receptor tyrosine kinase that is activated by two ligands of unrelated sequence - CSF1 and IL-34. The CSF3 receptor, also called G-CSFR, is a transmembrane protein that has the largest expression in neutrophils, but G-CSFR is also present in other types of cell. The CSF2 receptor (GM-CSFR) is expressed on monocytes, macrophages, eosinophils and neutrophils. The fundamental GM-CSFR subunit, expressed mainly on myeloid populations, comprises of a unique ligand-binding α-chain that contains three extracellular domains and a signaling β-chain. In order to let you have a more in-depth understanding of CSF, we have prepared the article, The Overview of Colony Stimulating Factors. Please read it.