NK cells, also known as natural killer cells, are a type of cytotoxic lymphocyte that is essential for the innate immune system. It was discovered and named in 1975 for its morphological specificity and was developed from common lymphoid precursor cells in the bone marrow. NK cells play a major role in host rejection of tumor and virus-infected cells. They kill cells by releasing proteins called perforin and granzymes, resulting in programmed cell death of target cells.

There are two main methods for in vitro culture of NK cells: trophoblast cell culture and pure factor cell culture.

All cells have their own unique markers, which can be proteins, lipids, glycosylation, etc., which can be used to distinguish between different cell types.

Cellular markers can be expressed either extracellularly or as intracellular molecules. For a long time, NK cells were thought to lack surface antigens and were called "naked lymphocytes." It is now known that NK cells express a large number of receptors.

In addition, up to 80% of NK cells in humans also express CD8. Here are some of the markers for some NK cells. 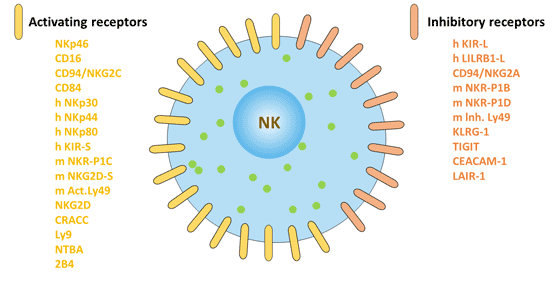 CD16 is a surface receptor expressed by natural killer (NK) cells, and CD16 on NK cells is completely transmembrane, rather than linked by GPI anchors, with the cytoplasmic tail of ITAM. It is an immunoglobulin Fc receptor that can trigger cell killing effects, allowing NK cells to mediate antibody-dependent killing (ADCC) [1]. CD16 expression in NK cell is related to signal transduction subunit zeta, and CD16 activation of NK cells leads to zeta tyrosine phosphorylation.

CD56 provides an important signal for synaptic growth and neuromuscular interactions. The effect of CD56 on NK cells may be adhesion.

According to the different CD56 density on the surface of NK cells, human NK cells can be divided into two subsets, CD56 dim and CD56 bright.

CD94 is displayed on the surface of NK cells as homotypic or heteromorphic to NKG2A. Once the CD94-NKG2A complex binds to the ligand, it has a strong inhibitory effect on NK cells. Although CD94 and dimers have different mechanisms of action, they also have inhibitory capabilities. It may be related to viruses that evade NK cells.

CD160 exists in the form of GPI or transmembrane, which is mainly expressed in the cytotoxic subsets of NK cells (CD56 dim / CD16 +).

In addition, it is also expressed on γ/δ T cells and a small fraction of CD8 Light αβT containing granzymes and perforin. It can also be expressed in CD8 + T in the intestinal epithelium.

In NK cells, CD160 enhances cell activation and cytotoxicity and activates the secretion of the cytokines IFN-γ, IL-6, IL-8 and TNF-α.

2.2.5 Other Surface Markers of NK Cells

CD2: CD2 is the surface protein of natural killer cells [2]. It is a NK cell trigger receptor with a size of 50-55 kDa and is also expressed in T cells. When bound to ligands on tumor cells, CD2 family members regulate the cleavage activity of natural killer (NK) cells and the production of inflammatory cytokines.

2B4 (CD244): a member of CD2 subset of the immunoglobulin superfamily molecule, expressed in natural killer (NK) cells and other white blood cells [3].

BAT: It distinguishes NK cells from other known subsets of T cells and B cells [4].

CD45: The role of cell surface phosphatase CD45 in NK cell development and activation of receptors in intracellular signaling is a key enzyme in inducing NK cell responses [5].

CD314 (KLRK1): It expressed in natural killer (NK) cells, activating the innate immune response of NK, leading to cytotoxic activity. It participation in NK cell-mediated bone marrow transplant rejection and may regulate the differentiation and survival of NK cells.

Helix Pomatia Receptors: the first simple and reliable marker detected on NK cells may be useful for purifying this cell type.

LAT (linker for activation of T cells): LAT is a 36-38 kDa complete membrane protein that plays an important role in T cell activation and ACTS as a novel immunohistochemical marker for T cells, NK cells, mast cells, and megakaryotes.

NK cells are mainly derived from bone marrow lymphoid stem cells, accounting for about 10% of lymphocytes in the body, and mainly distributed in peripheral blood and peripheral lymphoid tissues [8].

The balance of signals mediated by activated receptors and inhibitory receptors affects the killing activity of NK cells on tumors [9]. 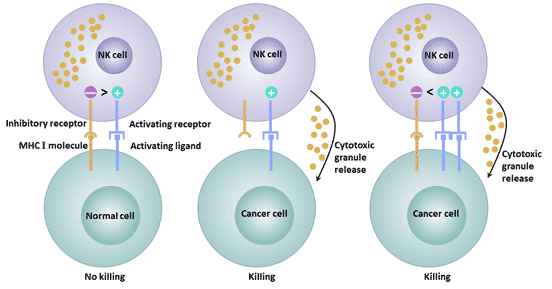 Figure 3 The different functions of activated and inhibitory receptors

In addition to the direct killing effect of NK cells themselves on tumor cells, activated NK cells can secrete a variety of cytokines, such as TNF, IFN, etc., which synergistically inhibit or kill tumor cells. 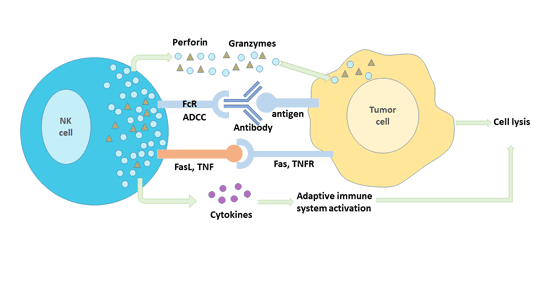 As an important part of the innate immune system, NK cells play an important role in tumor immunity. The expression of activated and inhibited receptors on the surface of NK cells determines their anti-tumor ability. NK cells have certain significance in inhibiting the growth and metastasis of lung cancer, breast cancer, colorectal cancer and other malignant tumors.

According to the anti-tumor immune mechanism of NK cells, tumors can be treated by corresponding methods.

It is based on antibody-dependent cell-mediated cytotoxicity (ADCC). It can target killing tumor cells or enhance the ADCC effect of NK cells.

For example, CD137 monoclonal antibody can increase the expression of CD137 in NK cells, and as an activation signaling molecule, it significantly enhances the ability of NK cells to degranulate, secrete IFN-γ and anti-tumor activity [14].

These results indicate that antibodies based on ADCC have a broad prospect of development and application.

6.2 KIR-HLA Mismatch between Donor and Recipient and Anti-Tumor Effect of NK Cells

NK cells can not only produce immune tolerance to normal cells in the body, but also kill tumor cells.

For tumor cells, the surface lacks HLA-I signaling molecules and is easily recognized and attacked by NK cells. A KIR-HLA mismatch between donors and recipients can cause heterologous reactivity of NK cells, activating donor NK cells to kill recipient cells.

When applied in the treatment of myeloid leukemia and lymphocytic leukemia, this method can effectively enhance the graft anti-leukemia effect [16] and improve the survival rate of patients.In the treatment of kidney cancer, gastric cancer, intestinal cancer, ovarian cancer and other solid tumors, good therapeutic effect has also been achieved [17].