3. The Roles of STAT3 in Cancer

First and the foremost, STAT3 mediates cellular responses to interleukins (e.g. IL6), KITLG/SCF, leptin (LEP) and other growth factors (like FGFR1, FGFR2, FGFR3, and FGFR4) [3-5]. Once activated, STAT3 could recruit co-activators (like NCOA1/SRC1 or MED1) or mediate the effects of LEP on melanocortin production, body energy homeostasis, and lactation [7, 8]. Besides, STAT3 promotes the cell differentiation (e.g. Th17 or Treg) [9] and genes expression (e.g. CCND1) [10]. Without stimuli, STAT3 is mainly present in the cytoplasm. Cytoplasmic STAT3 represses macroautophagy by inhibiting EIF2AK2/PKR activity [11].

Of note, mounting evidence suggested that STAT3 regulates diverse biological functions in pathogenesis of diseases. Compared to other STAT family members, STAT3 is considered as a higher potential target for tumor therapy given its immunosuppressive effects [12, 13]. Inhibition of STAT3 overexpression not only blocks the overproliferation of tumor cells, but also boosts the body's immune system against tumors, which may provide a novel new biomarker for cancer therapy.

Upstream cytokine and growth factors can activate STAT signaling pathway. STAT3 signaling pathways can modulate the transcription of genes, which are involved in the regulation of a variety of critical biological activities, particularly in tumor related mechanisms. Here, the well-known IL-6/JAK/STAT3 signal pathway and recently discovered STAT3 signal transduction pathways are introduced. 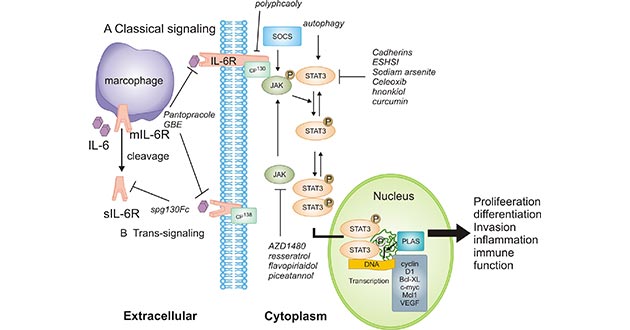 Figure 1. IL-6 leads to the activation of JAK/STAT3

Specifically, STAT3 will be phosphorylated and then forms dimers when activated by upstream signaling pathways such as JAK, epidermal growth factor receptor and IL-6R activation. As shown in Figure 1, the activated STAT3 complex will then translocate from the cytoplasm to the nucleus, which promotes transcription of STAT3 target genes including cyclin D1, Bcl-xL, c-myc, Mcl1 and vascular endothelial growth factor (VEGF) by combining with consensus DNA elements.

Accumulating evidence suggested that the IL-6/JAK/STAT3 signaling pathway is aberrantly hyperactivated in patients with chronic inflammatory conditions and in those with haematopoietic malignancies or solid tumours, such as breast, colorectal cancer.

A recent study published on Cancer Management and Research suggested a connection between α2β1/JAK/STAT3 signaling pathway and osteosarcoma progression [17].

Researchers found that type I collagen could facilitate the activation of JAK/STAT3 signals through integrin α2β1, which elicited tumor-sustained growth and cancer relapse. In tumor-bearing mice model, integrin α2β1 signals inhibitor significantly suppressed the osteosarcoma cells proliferation and their tumorigenic ability, which improved the outcome of chemotherapy/radiotherapy [17].

Taken together, the findings implied that type I collagen could mediate osteosarcoma cells stemness up-regulation through an integrin α2β1/JAK/STAT3 signaling pathway, eventually leading to tumor growth and development.

Another research revealed the new mechanism of mTOR/HIF-1α/PKM2/STAT3 signaling pathway in oral squamous cell carcinoma (OSCC). Researchers firstly found that metformin (a drug used for treatment of type 2 diabetes) inhibited CoCl2-induced epithelial-mesenchymal transition (EMT). Subsequently, they observed that the expression levels of mTOR, HIF-1α, PKM2 and STAT3 in the EMT process were inhibited by metformin. It suggested that metformin restrained CoCl2-induced EMT in OSCC by inhibiting the mTOR/HIF-1α/PKM2/STAT3 signaling pathway [18]. 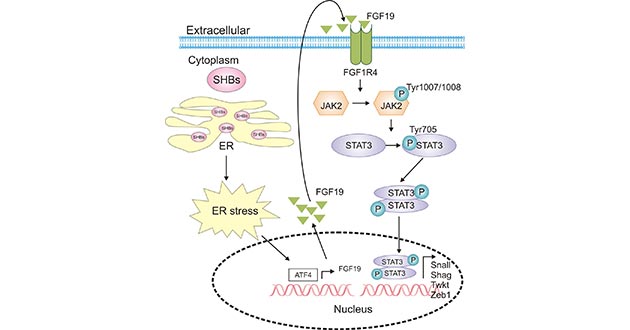 *This figure is derived from the publication on Cancer Letters [19]

As demonstrated in Figure 2, SHBs expression in HCC cells increased the expression and secretion of fibroblast growth factor 19 (FGF19). Moreover, the released FGF19 activated JAK2/STAT3 signaling, which induced the EMT process in HCC [19].

3. The Roles of STAT3 in Cancer

Ample solid evidence has indicated that STAT3 is crucial immune activation regulators and promoting the production of immunosuppressive factors, which are associated with a variety of cancer types, including brain, lung, pancreatic, renal, colorectal, endometrial, cervical, ovarian, breast and prostate cancer, melanoma, glioma, head and neck squamous cell carcinoma, lymphoma and leukemia [16]. Importantly, in the tumor microenvironment (TME), STAT3 activity in tumor cells supports multiple hallmarks of cancer, including increased secretion of immunosuppressive factors such as IL-6, IL-10 and EGFR, which can activate STAT3 [20]. 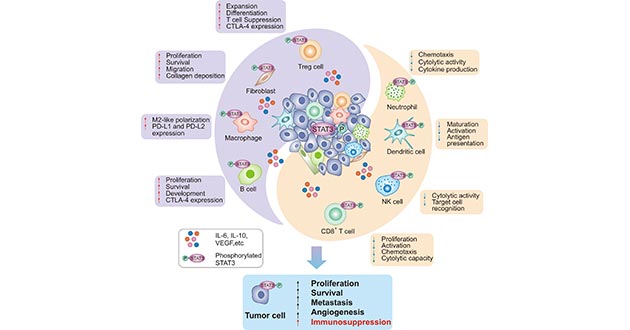 Figure 3. STAT3 induces the immunosuppression in the tumors

*This figure is derived from the publication on Molecular Cancer [20]

As shown in Figure 3, on the one hand, STAT3 favors the accumulation and enrichment of immunosuppressive Treg cells and B cells, as well as the polarization of M2-like macrophages, which leads to the immune escape. On the other hand, STAT3 in CD8+T cells, NK cells and neutrophils restrained anti-tumor activities. These effects have positioned STAT3 as an arisen potential promising target for cancer immunotherapy.

To date, many endeavors have been made to target STAT3 for the development and application of new drugs. These approaches are devised to inhibit STAT3 directly by peptides, small molecules and decoy oligonucleotides, or indirectly by blocking upstream signaling pathways such as IL-6 and JAK2 pathways [20, 21]. Albeit direct targeting of STAT3 has proven to be considerably challenging, three STAT3 inhibitors have been approved by FDA thus far: BBI608 (Napabucasin); Pyrimethamine; Celecoxib. Among them, BBI608 is only direct inhibitor of STAT3. Moreover, FDA has approved BBI608 as an orphan drug for treatment of gastric and pancreatic cancer based on the promising results in clinical trials. Given the huge potential of STAT3 in cancer therapy, more pharmaceutical companies are working on the STAT3 targeting and focusing on new drug designs. Studies of relevant inhibitors ongoing clinical trials are introduced in below [20]

Additionally, STAT3 was considered as one of hot top10 specific immuno-oncology targets in the 2019 analysis, reported on Nature Reviews Drug Discovery. It further suggested that much research has focused on targeting STAT3 to provide alternative strategies for cancer therapies. Moreover, it said that the global cancer immunotherapy market is set to reach about $30 billion in 2019 and will steadily rise to about $100 billion by 2022. This is expected to be driven largely by use of the potential targeting agents. Considering that, targeting STAT3 not only holds great promise for significant advancement in cancer treatment but also indicates the broad potential market of STAT3-targeted agents.

[8] Augustine, Rachael A., Sharon R. Ladyman, and David R. Grattan. "From feeding one to feeding many: hormone‐induced changes in bodyweight homeostasis during pregnancy." The Journal of physiology 586.2 (2008): 387-397.