2. The Structure of GPCRs

3. The Classification of GPCR

In 2000, the first crystal structure of mammalian GPCR, bovine rhodopsin (PDB1F88), was discovered.

In 2007, the crystal structure of the first human GPCR-the β2 adrenergic receptor, was analyzed. The GPCR structure is very similar to bovine rhodopsin.

In 2011, the high resolution structure of human β2 adrenergic receptor and Gs heterotrimeric complex was analyzed.

In 2012, Brian Kobilka and Robert Lefkowitz won the 2012 Nobel Prize in Chemistry for their outstanding contributions to the field of G-protein coupled receptors. Kobilka et al. reported the detailed crystal structure of the G protein-coupled receptor (GPCR) complex, a discovery that is truly a breakthrough.

In 2015, the crystal structure of the first intact complex of rhodopsin and visual arrestin was analyzed.

Nearly 2000 different GPCRs have been reported so far.


2. The Structure of GPCRs

GPCRs are a family of intact membrane proteins with a conserved spatial structure. 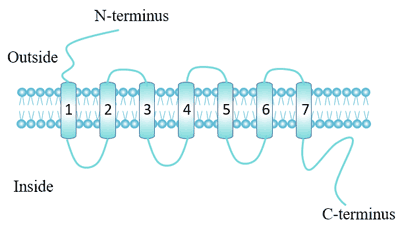 
3. The Classification of GPCR

Based on sequence homology and functional similarity, GPCRs can be divided into six class [2]:

Despite the lack of sequence homology among classes, all GPCRs share the same signal transduction structure and mechanism.

The largest class is class A, which accounts for nearly 85% of the GPCR gene, and most of its receptors are predicted to encode olfactory receptors. Group A was further subdivided into 19 subgroups (A1-A19).

In recent years, the concept of orphan receptor has been proposed, which refers to the receptor whose endogenous ligand has not been found. The first successful example of "orphan removal" by reverse pharmacology is opioid receptor ORL1 [3] [4].

Bioinformatics prediction methods also have been used to predict the classification of GPCRs. These ligands can be small molecules of sugars, lipids, polypeptides, or biological macromolecules such as proteins. Some special G-protein-coupled receptors can also be activated by non-chemical stimuli. For example, rhodopsin in photoreceptor cells can be activated by light.

More than 100 ligands are known to achieve transmembrane signaling through G-protein coupled receptors, including:

4.2 The Properties of Ligands

The properties of GPCR ligands determine the state of GPCR, and there are three different types of ligands:

An agonist is a ligand that biases the equilibrium to an active state, and the receptor is further coupled to a G protein heterotrimer to transduce the ligand signal into the cell.

An inverse agonist is a ligand that biases the equilibrium toward an inactive state.

Neutral antagonists are ligands that do not affect balance.

4.3 The Ligand Binding Domain of GPCRs

There are certain differences in binding sites depending on the size of the ligand. Some small molecular ligands, such as norepinephrine, bind in the deep part of the cell membrane and require the involvement of key residues in TM region. Other ligands form different degrees of binding with the outer surface of TM segment and the N-terminal region.

The extracellular domain of the receptor.

Some ligands interact with both binding cracks and extracellular domains. 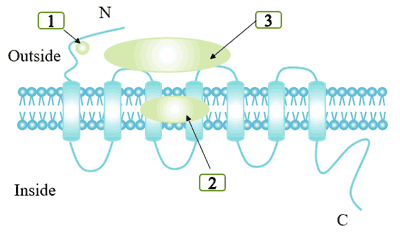 GPCRs are involved in many physiological processes. It mainly includes:

5.1 Function of GPCR in Animals

Taste: GPCRs can mediate the release of bitter, umami and sweet substances by gustducin.

Osphresio: Olfactory epithelium in the nasal cavity and olfactory receptors on the vomeronasal organ can sense odor molecules and pheromones.

Behavioral and Mood Regulation: Neurotransmitters such as serotonin, dopamine, GABA, and glutamate bind to G-protein coupled receptors in the brain of mammals.

Immune System Regulation: Chemokines function by binding to G-protein-coupled receptors. GPCRs are involved in immune regulation. Many mediators of immunity or inflammation, such as histamine, purine nucleoside and prostaglandin, transmit signals through GPCR.

Homeostasis: The regulation of water balance in the body.

5.2 Function of GPCR in Plants

To date, thousands of GPCR species have been found in animals. However, only one single GPCR has been isolated from peas [5] and maize in plants. Computational analysis shows that GPCR also exists in arabidopsis thaliana, poplar and rice [6].

GPCRs are involved in signal transduction pathways in plants and can affect a series of metabolic and differentiation activities.

GPCR in arabidopsis thaliana has been reported to regulate cell cycle [7] and is involved in ABA and stress signaling [8]. To date, only one putative GPCR (GCR1) has been identified and experimentally studied in Arabidopsis [9].

GPCR functions in plants include:

The G protein is a trimer composed of three subunits of α, β, and γ. The G protein coupled receptors bound to ligands undergo conformational changes, thus showing the characteristics of guanylate exchange factor (GEF). The alpha subunit of G protein is separated from beta and gamma subunits by exchanging the originally bound guanosine diphosphate (GDP) on G protein with GTP [14]. Gα-GTP and Gβγ can act on effector proteins and further trigger a series of downstream effects, and the specific signaling pathway involved depends on the type of G protein. After Gα-GTP exerts its effect, α subunit uses its own GTPase activity to hydrolyze GTP to GDP, and then binds to the βγ subunit to re-form the inactive G protein trimer. 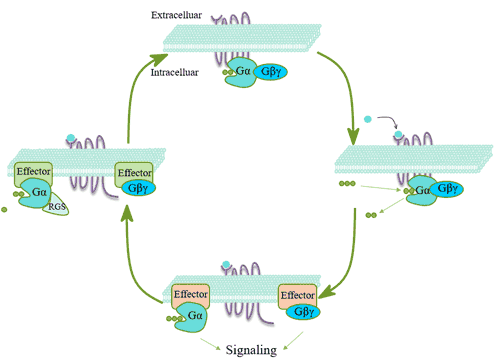 G protein is a protein that can bind to guanine nucleotides and has GTPase activity. It is composed of α subunit, β subunit and γ subunit.

According to the difference between the effector enzyme and the intracellular second messenger signal transduction component, the main reaction pathways are as follows:

The hormone acts on the corresponding receptor on the target cell membrane, and activates the intramembrane adenylate cyclase (Ac) via G-protein coupling. In the role of Mg2+, adenylate cyclase catalyzes the conversion of ATP to cAMP. cAMP, as the second messenger, activates cAMP-dependent protein kinase (PKA), which in turn catalyzes phosphorylation of various substrates in the cell, and finally leads to biological effects in the cell, such as cell secretion, muscle cell contraction, cell membrane permeability changes, and various enzymatic reactions in the cell. 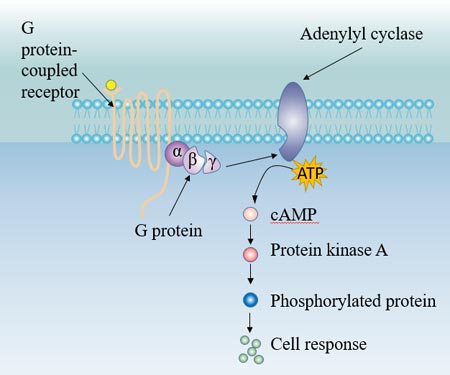 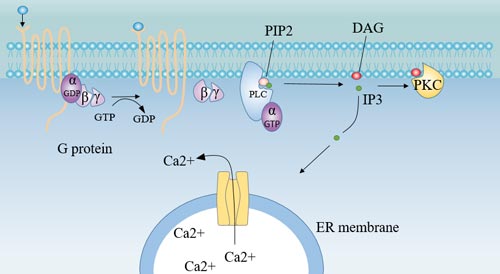 The mechanism is shown below. 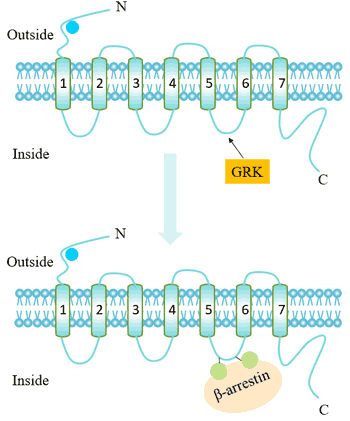 Figure 7. The mechanism of desensitization

The G protein receptor kinase (GRK) recognizes and acts on a receptor that binds to an agonist, phosphorylating specific residues on GPCR. This increases the affinity of the GPCR for the beta-arrestin protein. Beta-arrestin binding can target receptor endocytosis, resulting in a decrease in the number of cell surface receptors (receptor internalization).

Receptor internalization, also known as the intracellular attachment of activated receptors, has been a hot topic in recent years. GPCRs internalization may involve multiple endocytosis mechanisms [18].

Of the 826 human GPCRs, approximately 350 non-olfactory members are regarded as druggable and 165 of them are validated drug targets (Figure 8). 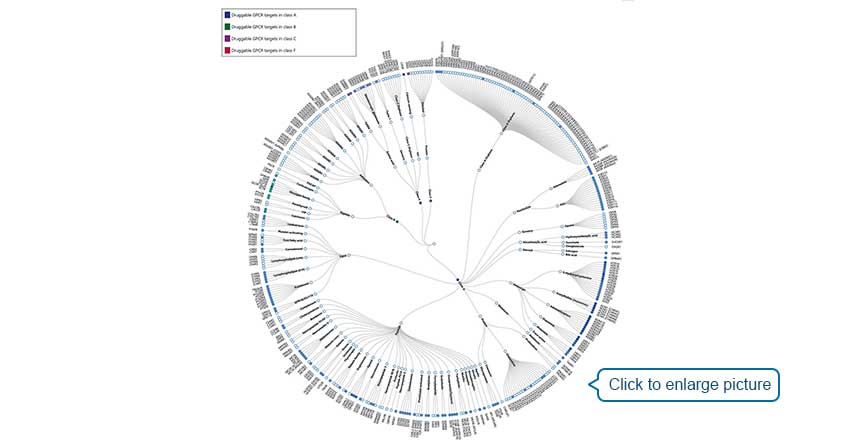 Figure 8. Phylogenetic tree of GPCRs as drug targets. Node represents GPCR named according to its gene name. Receptors with approved drugs on the market are highlighted by color. GPCRs are organized according to GPCR database [26]

The drug has the same affinity for the receptor's inactive conformation and active conformation, does not produce biological effects, and can compete against agonists and reverse agonists. A typical drug is propranolol acting on beta adrenergic receptors.

Regulator of G-protein signaling (RGS) is a family of proteins that can regulate signal transduction through G protein.

It may also antagonize Gβγ-mediated biological effects by binding to β subunits.

They can also bind directly to receptors or act as g-alpha effector molecules to regulate signal transduction pathways.

[7] Gabriella C, Fabio A, Nicole A, et al. GCR1, the putative Arabidopsis G protein-coupled receptor gene is cell cycle-regulated, and its overexpression abolishes seed dormancy and shortens time to flowering [J]. Proceedings of the National Academy of Sciences of the United States of America, 2002, 99(7): 4736-4741.

[18] Chuang D M, Costa E. Evidence for internalization of the recognition site of beta-adrenergic receptors during receptor subsensitivity induced by (-)-isoproterenol [J]. Proceedings of the National Academy of Sciences, 1979, 76(6): 3024-3028.