5. Application of PD-1/PD-L in Therapy

The PD-1 gene is located on human chromosome 2q37 and encodes a type I transmembrane glycoprotein with a relative molecular mass of 50 kDa-55 kDa. The protein is expressed in monomeric form on the cell membrane surface.

When PD-1 binds to its ligand, both tyrosines are phosphorylated, but ITIM does not transduce the inhibitory signal of the PD-1 signaling pathway, and only the phosphorylation of tyrosine in ITSM can play a regulatory role.

Extensive expression of PD-1 suggests that it has an essential role in maintaining a negative immune response in the body.

The ligands of PD-1 are mainly PD-L1 and PD-L2, and PD-L1 is the main ligand [2], which is highly expressed in various malignant tumors. 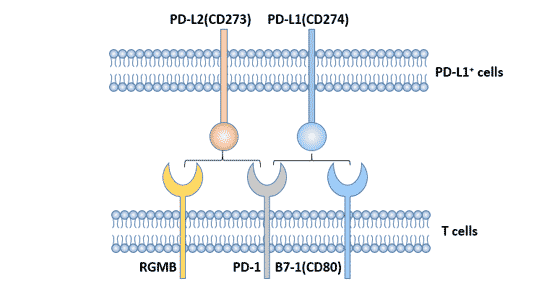 PD-L1 is a 40 kDa type I transmembrane glycoprotein composed of an extracellular domain, a hydrophobic transmembrane domain and a short cytoplasmic domain.

The extracellular domain has an immunoglobulin constant region (IgC) domain and an immunoglobulin variable region (IgV) domain. Although the PD-L1 molecular extracellular amino acid sequence has only 20% and 15% homology with B7-1 and B7-2, their secondary structure and tertiary structure are very similar, and thus exhibit similar biological functions.

The PD-L1 cytoplasmic domain contains a protein kinase C phosphorylation site, but the signal transduction motif in the intracellular region is currently unclear.

CD274 is highly expressed in the heart, skeletal muscle, placenta, and lung, and is weakly expressed in the thymus, spleen, kidney, and liver. PD-LI is expressed on T cells, B cells, macrophages, dendritic cells, mesenchymal stem cells, and cultured bone marrow-derived mast cells, and the expression was significantly up-regulated in activated cells.

PD-L1 is expressed in a variety of tumor cells, such as human lung cancer, ovarian cancer, colon cancer, kidney cancer, and melanoma.

Compared with PD-L1, the expression of PD-L2 is relatively limited, and PD-L2 is inductively expressed on the surface of dendritic cells, macrophages, bone marrow-derived mast cells and other cells [5] [6]. Human PD-L2 is also expressed in vascular endothelial cells. 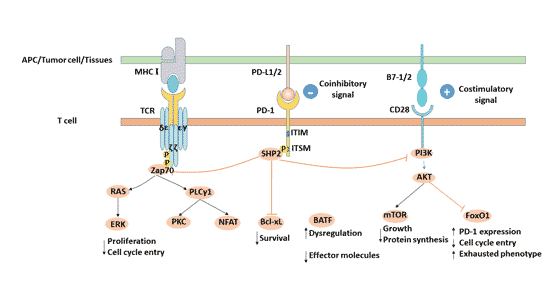 IFN-γ up-regulates PD-L1 on the surface of normal tissue cells and different tumor tissues, and down-regulates the immune response of the tumor microenvironment by inducing PD-L1 expression.

After T cells are stimulated by inflammatory signals, PD-1 is induced to produce and limit the function of T cells in a variety of peripheral tissues dominated by infections and tumors, thereby limiting the amplification and duration of the immune response, thereby avoiding damage to normal tissue.

Although the physiological functions of PD-L1 and PD-1 are up-regulated to avoid the expansion of inflammation and reduce tissue damage, the induced production of PD-L1 in the tumor microenvironment will promote the apoptosis of activated T cells and stimulate the production of IL-10 in human peripheral blood T cells to regulate the immunosuppression.

The interaction of PD-1/PD-L1 plays an important role in inhibiting T cells in vivo. PD-L1 binds to receptor PD-1 on T cell membrane to produce an inhibitory signal, which can prevent proliferation and activation of CD4+ T cells and CD8+ T cells, down-regulate the expression of some anti-apoptotic molecules and pro-inflammatory factors, and change the tumor microenvironment.

This weakens the ability of the body to monitor and clear tumor cells, resulting in immune escape, allowing tumor cells to proliferate indefinitely in the body [10]. Therefore, blocking the PD-1/PD-L1 pathway restores the killing effect of the immune system on tumor cells.

PD-1 binds with its main ligand PD-L1 to form the PD-1/PD-L1 signaling pathway, which plays an important role in maintaining peripheral tolerance and regulating antigen-specific T cell activity, and is an important factor influencing chronic infectious diseases and autoimmune diseases.

The PD-1/PD-L pathway has a positive regulatory effect on autoimmune diseases and transplant rejection, but plays a negative role in antiviral and antitumor effects.

Virus infection can lead to increased expression of PD-1 and PD-L1 on the surface of antigen-specific T cells, inhibit proliferation of CD4 + and CD8 + T cells, reduce secretion or spread of cytokines interleukin-2 (IL-2) and interferon gamma (IFN-gamma), and lead to decreased immune function or even failure of specific T lymphocytes.

This weakens the host's anti-infective immune response, leading to damage to the target organ, which ultimately leads to the development of related diseases such as persistent viral infection. This suggests that the PD-1/PD-L1 pathway may be one of the leading causes of chronic viral infection and chronic disease.

The PD-1/PD-L pathway has been shown to be associated with chronic viral infections such as HIV, HBV, HCV [11].

In chronic viral infection, CD8+T cells can be reactivated, proliferated and differentiated by blocking PD-1 with antibodies, and their virus-killing ability can be restored, resulting in decreased viral titer [12].

This is a systemic autoimmune disease. It was found that [14], the locus of PD-1 gene on human chromosome is exactly a highly sensitive candidate locus for SLE.

Decreased expression of PD-1 is associated with the PD-1.3A/G allele, probably because the polymorphism of PD-1.3 disrupts the DNA binding site of Runt-related protein 1 and causes a decrease in the transcription level of PD-1 gene. It causes abnormal activation and proliferation of T cells and the like, thereby inducing the occurrence of SLE.

The level of PD-1 expressed on the surface of CD4+ and CD8+ T cells and the soluble PD-1 (sPD-1) in serum decreased in RA patients [15]. This indicates that PD-1 is involved in the development of rheumatoid arthritis by regulating the activity of T cells.

In humans, antigens expressed in tumor tissue are recognized by host T cells but not necessarily eliminated.

Activation of PD-1/PD-L1 signaling pathway inhibits proliferation and activation of CD4+ T cells and CD8+ T cells, inhibits the expression of cytokines, changes the tumor microenvironment. This promotes tumor cells to evade immune surveillance and killing [16]. Therefore, the PD-1/PD-L pathway has become a new target for the treatment of tumors. 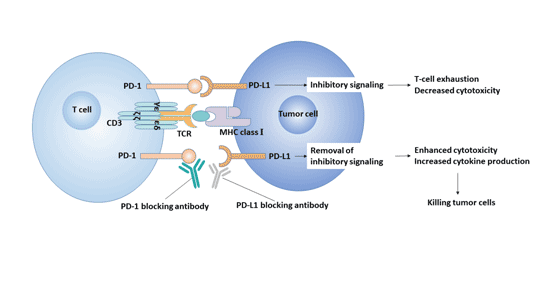 5. Application of PD-1/PD-L in Therapy

Pembrolizumab has been approved for use in melanoma, HNSCC, cervical cancer, cHL, NSCLC, BC, gastric cancer, and gastroesophageal cancer, as well as all advanced solid tumors classified as MSI-H/dMMR.

Avelumab has been approved for the treatment of Merkel cell carcinoma and BC.

Atezolizumab has been approved for NSCLC and bladder cancer.

Durvalumab has been approved for the treatment of bladder cancer and NSCLC (phase III).

In the melanoma phase III clinical trial, the efficacy of the PD-1 antibodies nivolumab and pembrolizumab were recognized.

In addition, PD-1 antibodies have also been used in lung cancer and ovarian cancer.

This may be due to the destruction of the body's immune homeostasis, which is maintained by the immune checkpoint [17]. In other words, by targeting and blocking negative regulatory factors such as immune checkpoints, the activity of T cells can be enhanced, leading to over-enhancement of immunity, which will inevitably cause damage to normal tissues while achieving anti-tumor effect.