SLC39A6/ZIP6: a Key Member of Zinc Transporters, a Novel Targeting Antigen of ADC!

Presently, ADC competition heats up in global biotech or pharmaceuticals companies. According to the Pharmsnap database, there are nearly 100 partnered or licensed deals based on ADC new drugs, which has an estimated value of about $40 billion. As of now, there are around 17 ADC deals in 2022. Among ADC contenders, SLC39A6 has emerged as an potential candidate for ADC. Albeit SLC39A6 is newly discovered target in cancers, it is widely reported in tumor studies and even employed in ADC.

Earlier, pharmaceutical giant Merck has struck a deal to develop Seagen’ Phase II ADC (ladiratuzumab vedotin, also named MK-6440 or SGN-LIV1A). Merck paid $1.6 billion to co-develop and co-commercialize ladiratuzumab vedotin. SGN-LIV1A is a novel ADC, targeting the zinc transporter SLC39A6 for the treatment of solid tumors. Importantly, accumulating studies are suggesting that SLC39A6 is highly expressed in a variety of tumor cells but limited expression in normal tissues, making it an attractive candidate for ADC therapy! Much more information about SLC39A6 is needed to read this article!

1. What are Zinc Transporter Families?

4. Roles of SLC39A6 in Cancer Therapy


1. What are Zinc Transporter Families?

Zinc transporters are distributed differently in various tissues, organelle membranes, cells, and organs, such as SLC39A6, ZIP14, and ZnT1/SLC30A1 are predominantly localized to the cell membrane; in terms of tissue and organ distribution, ZIP5, ZnT1, and ZnT2 are mainly expressed in in pancreatic gland cells, ZIP8 and ZIP10 in blood cells, etc [4-5]. Intriguingly, there is growing evidence that the zinc transporters are not only directly involved in the homeostatic metabolism of zinc in cells, but also influences the metabolic diseases, even in tumors progression [4-5]. 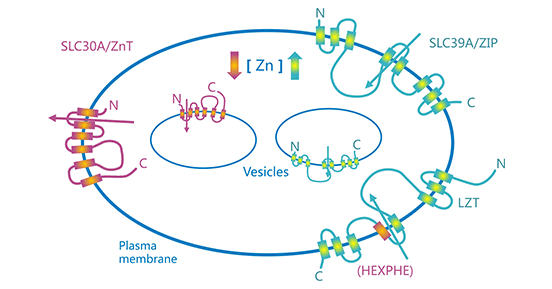 SLC39A6 (also known as ZIP6 or LIV-1) is a member of the SLC39A/ZIP zinc transporter protein family. SLC39A6 exists two isoforms of 755 and 433 amino acids in length. SLC39A6 contains a histidine-rich transcriptional domain that binds to zinc, and aids in its transport into the cell (Figure 2) [7]. The primary function of SLC39A6 is to transfer zinc from the extracellular to the cytoplasm or from the organelle to the cytoplasm. Thus, SLC39A6 plays indispensable roles in maintaining zinc homeostasis by regulating the influx of zinc. SLC39A6 is also regarded as a key protein in the mechanism of action of enzymes, transcription factors, and signaling molecules [8-9].

SLC39A6 is mainly localized in the cell membrane, acting as a zinc-influx transporter. In recent years, many studies on SLC39A6 have indicated that SLC39A6 is abnormally expressed in many cancers, such as esophageal, cervical, lung and breast cancers, etc., suggesting that SLC39A6 might play a critical role in the process of tumor development [10-15]. 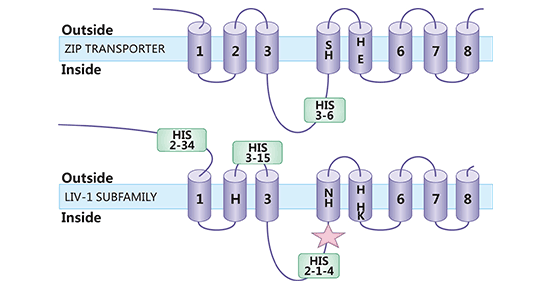 SLC39A6 have recently received a great deal of attention since its involvement in tumor-related mechanisms, such as JAK/STAT, PI3K/AKT, EGFR-Ras-ERK, MAPK/ERK, and other signaling pathways. SLC39A6 as a newly discovered target in tumors, the complex mechanism of SLC39A6 in tumorigenesis process needs to be further elucidated.

STAT3 and zinc finger protein (Snail) are major markers of the epithelial-mesenchymal transition (EMT) pathway. SLC39A6 was identified as a downstream target of STAT3 that promotes the entry of Snail into the nucleus. In turn, the Snail reduces the expression of genes related to cell adhesion, which plays an important role in the transformation of epithelial cells into mesenchymal cells [16-17]. Therefore, SLC39A6 can regulate the cell differentiation process by affecting Snail expression.

Another study pointed out that in breast cancer, cells transfected with ZIP6 show inhibition of GSK-3β. The inactivated GSK3β cannot phosphorylate snail, which makes snail stay in the nucleus to inhibit cellular cross-linking gene E-cadherin transcription and promote cell migration [18]. SLC39A6 as a downstream target of STAT3 in esophageal squamous carcinoma, SLC39A6 is involved in the EMT process of esophageal squamous carcinoma by regulating the SNAIL2 gene [19].

EGFR belongs to the membrane receptor tyrosine kinase (RTK) family. EGFR is known receptor for EGF and TGFα. Amphiregulin, betacellulin, heparin-binding EGF (HBEGF), epiregulin, and vaccinia virus growth factor (VGF) also bind to EGFR. The binding between EGFR and its ligands can recruit other receptor substrate proteins and activate a series of downstream signaling pathways, such as Ras/MAPK and PI3K/AKT pathway, which is linked to cancer.

In addition, SLC39A6 in the tumor microenvironment could be activated by EGF, IGF-1, and other growth factors [20]. In prostate tumor cell lines, SLC39A6 overexpression induces EGFR and ERK phosphorylation. As a result, its downstream molecules promote cell migration and invasion [21]. In esophageal squamous cell carcinoma (ESCC), upregulated SLC39A6 activate AKT and ERK pathways that regulate MMP1, MMP3, MYC, and SLUG expression (Figure 3) [22]. Currently, many studies revealed that SLC39A6 can act as an important cancer-related gene, but the specific mechanism of SLC39A6's role in cancer still needs to be further investigated. 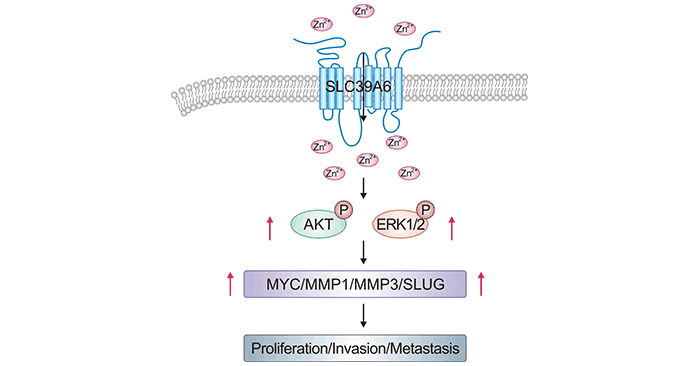 In esophageal cancer, down-regulation of SLC39A6 inhibited the proliferation and invasion of cells. Up-regulation of SLC39A6 was associated with tumor aggressiveness, intracellular zinc levels, and patient survival time. Further analysis showed that with upregulated SLC39A6 expression in esophageal squamous cell carcinoma (ESCC), researchers observed the increased expression levels in matrix metalloproteinase 1, matrix metalloproteinase 3. Successive studies concluded that SLC39A6 has a tumor-promoting role in esophageal cancer, suggesting that SLC39A6 may serve as a promising marker for early detection, prognosis in high-risk patients. Taken together, targeting SLC39A6 may be a potential therapeutic strategy for blocking esophageal cancer [22, 23-24].

The miRNA microarray analysis revealed that miR-192 expression was decreased in hepatocellular carcinoma cell lines MHCC-97L, MHCC-97H, and HCC-LM3. Furthermore, miR-192 expression level was decreased in the vascular cell infiltration group compared with the non-infiltrated group. In contrast, SLC39A6 is a direct target of miR-192 and SLC39A6 was negatively correlated with miR-192. Thus, SLC39A6 may promote the migration and invasion of hepatocellular carcinoma cells [25-27].

SLC39A6 has been originally described as an estrogen-inducible gene that is upregulated in estrogen receptor-positive breast cancer (ER+BC). Besides, the results of the related RNAseq analysis identified that in the luminal-type breast cancer, SLC39A6, PGR, ESR1, GATA3, BCL2, GATA3, and NAT1 were downregulated in metastatic tumors, suggesting that SLC39A6 may be associated with the grading, size and staging of breast tumors [30-32]. Ladiratuzumab vedotin (SGN-LIVI1), an ADC drug targeting SLC39A6, is currently being used in combination with pembrolizumab (Keytruda) in clinical studies for the treatment of metastatic triple-negative breast cancer [18, 33].

In addition, aberrant expression of SLC39A6 has been found in a variety of other tumors, including gliomas, ovarian, bladder, prostate, head and neck, lung, and gastric cancers [15, 21, 34-38]. As a key mediator of intracellular zinc levels, SLC39A6 is highly expressed in steroid hormone-sensitive tissues such as the placenta and prostate [1, 21, 39]. In gastric cancer, the single nucleotide polymorphism rs1050631 of SLC39A6 is strongly implicated in the prognosis of patients with surgically removed gastric adenomas [38]. In glioma, SLC39A6 was highly expressed and significantly correlated with tumor grade and stage [34]. In non-small cell lung cancer, knockdown of SLC39A6 restrained cell proliferation, invasion, and migration and cells accumulated in the G1 phase [15, 40].

Data from Pharmsnap exhibited that there is one SLC39A6-based ADC antibody drug (Ladiratuzumab vedotin) in clinical phase II for the treatment of adenocarcinoma, esophageal cancer, breast cancer, and many other tumors. There are 11 clinical trials in progress for the treatment of solid tumors such as non-small cell lung cancer and triple-negative breast cancer. As of now, a total of 14 ADC drugs have received the marketing approval. Early efforts at ADCs focused on HER2 and TROP2. Subsequent ADCs have expanded to FRα, VEGF, CD19, CD22, CD30, EGFR, KAAG1, NaPi2b, c-MET, CLDN18.2, HER3, LIV-1/SLC39A6, Nectin-4, and MSLN etc. SLC39A6, as a new tumor-related molecule, is an emerging ADC target that is expected to make breakthroughs in the treatment of esophageal cancer and breast cancer, or other tumors.

To fully support researchers and pharmaceutical companies in their research on SLC39A6 in tumors such as esophageal and breast cancers, CUSABIO presents the SLC39A6 active protein product (Code: CSB-BP621669HU1) to assist you in your research on the mechanism of SLC39A6 or its potential clinical value.

The purity was greater than 95% as determined by SDS-PAGE. 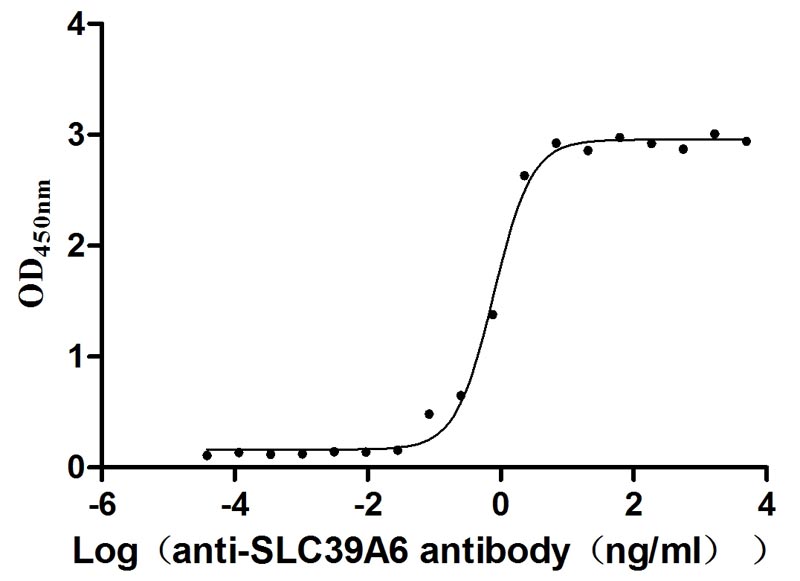