Cardiovascular disease (CVD) remains the leading cause of death worldwide, including myocardial infarction (MI), heart failure, stroke and claudication [1]. Atherosclerosis, the dominant cause of CVD, is mainly located in the intima of many middle sized and large arteries, especially where the vessels divide [2]. So what is Atherosclerosis? How it develops? And what are the symptoms and treatments? Please continue to read on…

3. What are Symptoms of Atherosclerosis?

4. What are the Stages of Atherosclerosis Development?

5. What is the Most Common Treatment for Atherosclerosis?

6. What are the Potential Targets of Atherosclerosis Treatment?

7. What are the Differences between Arteriosclerosis and Atherosclerosis?

Atherosclerosis is a narrowing of the arteries that can restrict blood flow. In atherosclerosis, the arteries are narrowed when fatty deposits called plaques build up inside. This narrows the channel within the artery – reducing blood flow. That lessens the amount of oxygen and other nutrients reaching the body. Plaques are made up fatty substances, cholesterol, calcium and fibrin.

Atherosclerosis, a multifocal, smoldering, immunoinflammatory disease, is a slow, lifelong progression of changes in the blood vessels [3]. The atherosclerotic plaque is featured by an accumulation of lipids in the artery wall, together with infiltration of immunocytes (such as macrophages, T cells and mast cells) and the formation by vascular smooth muscle cells of a fibrous cap composed mostly of collagen. Early lesions called 'fatty streaks' consist of sub-endothelial depositions of lipids, macrophage foam cells loaded with cholesterol and T cells (Figure 1). *This diagram is derived from reference 4.

Over time, a more complex lesion develops, with apoptotic as well as necrotic cells, cell debris and cholesterol crystals forming a necrotic core in the lesion. This structure is covered by a fibrous cap of variable thickness, and its 'shoulder' regions are infiltrated by activated T cells, macrophages and mast cells, which produce proinflammatory mediators and enzymes [5]. Plaque growth can cause stenosis (narrowing of the lumen) that can contribute to ischemia in the surrounding tissue.

3. What are Symptoms of Atherosclerosis?

Generally speaking, mild arteriosclerosis may not have any symptoms until it severely narrows or totally blocks an artery, because plaque buildup happens gradually. Many people don't know they have the disease until they have a medical emergency, such as a heart attack or stroke. Symptoms of moderate to severe arteriosclerosis depend on which arteries are affected, including:

4. What are the Stages of Atherosclerosis Development? 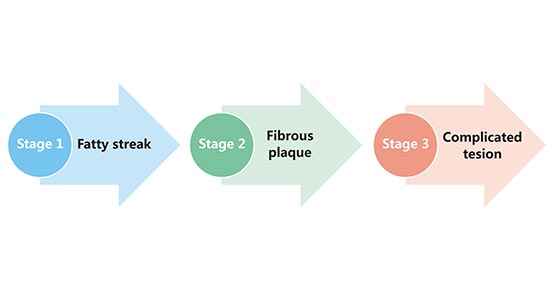 A fibrous plaque develops within the inner layer of the arteries, which consists of a huge number of macrophages, smooth muscle cells and lymphocytes. These types of cells are completely filled with accumulated cholesterol. As the fibrous plaque grows, it begins to protrude into the vessel causing narrowing of the lumen of the arteries as well as stagnation of blood flow in them. The final stage of atherosclerosis is called complicated lesion, which starts when a fibrous plaque ruptures, exposing the cholesterol and connective tissue under it, thus provoking an intense blood coagulation reaction (leading to the formation of multiple blood clots or thrombi).

5. What are the Treatments for Atherosclerosis?

Treatments for atherosclerosis usually include heart-healthy lifestyle changes, medicines, and medical procedures or surgery. Among of them, heart-healthy lifestyle changes involve heart-healthy eating, aiming for a healthy weight, managing stress, physical activity and quitting smoking. Sometimes, if lifestyle changes alone aren't enough to control your cholesterol levels, your doctor may discuss beginning statin or other medications treatment. These medications aim to lower your blood pressure and blood sugar levels, prevent blood clots and inflammation. Finally, if you have severe atherosclerosis, your doctor may recommend a medical procedure or surgery, including percutaneous coronary intervention (PCI), coronary artery bypass grafting (CABG) and carotid endarterectomy.

6. What are the Potential Targets of Atherosclerosis Treatment?

Studies show that atherosclerosis is a slow, complex disease that may start in childhood, although the exact cause is still unknown. Combining with the clinical data, we list several drugs of potential targets which have been approved for atherosclerosis treatment on the following table:

7. What are the Differences between Arteriosclerosis and Atherosclerosis?