Blood consists of liquid (also called plasma) and solids (including red blood cells, white blood cells, and platelets). It plays a key role in transporting oxygen and nutrients to the cells and carrying away carbon dioxide and other waste products. Blood pressure (BP) is the pressure of circulating blood against the walls of blood vessels. Most of this pressure is caused by the heart pumping blood through the circulatory system. It usually refers to the pressure in the large arteries. Blood pressure is one of the most commonly measured clinical parameters and blood pressure values are major determinants of therapeutic decisions [1]. It is measured in millimeters of mercury (mmHg) above the surrounding atmospheric pressure.

Blood pressure regulation, a complex process, is regulated by several mechanisms that work in unison to maintain homeostasis. Rapid adjustments in blood pressure are regulated by the baroreceptor reflex, which act via the brain to influence the nervous and the endocrine systems. Intermediate and long term regulation of blood pressure is predominantly mediated by vasoactive compounds. Among of these mechanisms, the renin–angiotensin–aldosterone system (RAAS) is the most clear. RAAS is a hormone system [2] that regulates blood pressure and fluid and electrolyte balance, as well as systemic vascular resistance. 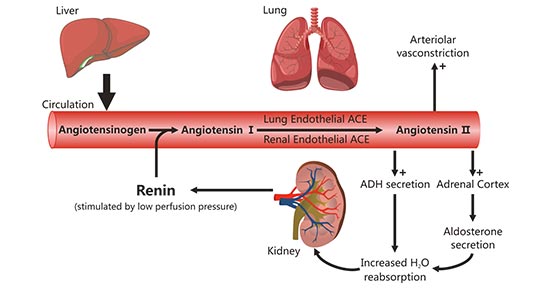 CUSABIO has been committed to developing and expanding this featured area, where we have the most comprehensive products involving blood cell antigens and blood pressure regulators. To learn more about the related products, Please click on the following targets to view all products of them.