As the largest membrane protein family in the known human genome, G protein-coupled receptors (GPCRs) have glittered star proteins, which have been favored by pharmaceutical companies in recent years. GPCR is responsible for about 80% of transmembrane signal transduction and participates in the regulation of most pathophysiological processes in the human body. According to statistics, at least one-third of the small molecule drugs on the world drug market are GPCR activators or antagonists. It is no exaggeration to say that mastering the fine structure of GPCR is to obtain the code of life!

The 2012 Nobel Prize in chemistry was awarded to two American scientists, Robert J. Lefkowitz and Brian K. Kobilka, in the field of G protein-coupled receptor research. Their outstanding work results are inspiring and admirable. On April 13, 2022, four Nature papers explaining the mysteries of the past life and present life of the GPCR were published on the same day, indicating that it will long occupy an important position in the research and development of biological drugs. In another article released by CUSABIO (G protein-Coupled Receptor - Targets for Drug Therapy), the structure, classification, and action mechanism of GPCR are described in detail. In this article, we will focus on the overview of GPCR drugs development.

G Protein-Coupled Receptor (GPCR) is the largest membrane protein family in the human genome, with more than 800 members in total and can be divided into multiple subfamilies. At present, there are two commonly used methods for the classification of GPCR members: one is the A-F classification system; The other was that according to sequence similarity and functional similarity, GPCR were divided into 5 classes, i.e., Rhodopsin, secret, Glutamate, Frizzled and Adhesion.

As shown in Fig. 1, the backbone of the GPCR was composed of seven α -helix structures spanning the cytoplasmic membrane. The N-terminal and three loops are located outside the cell to mediate the interaction between the ligands. The C-terminal and three loops are located in the cell, where the C-terminal and the third loop play an important role in the interaction of the GPCR protein with the downstream G protein to mediate intracellular signal transduction. The combination of specific ligands with GPCR will lead to the activation of g protein and the generation of second messenger Ca2+ or cAMP, which will transmit the extracellular signals accepted by GPCR downstream. However, GPCR can also mediate G-protein-independent signaling, e.g., by interacting with molecules such as β-arrestin to regulate downstream pathways. 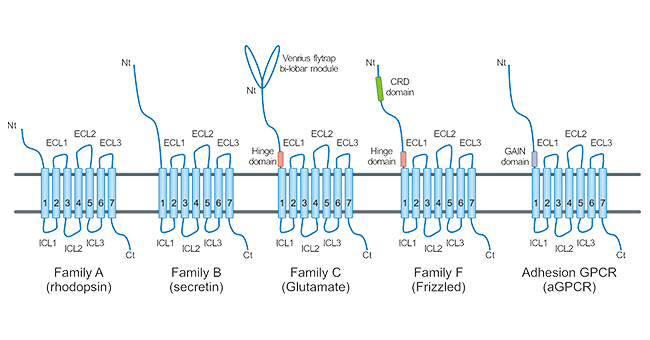 The Rhodopsin receptor family (Class A) is the largest family of GPCR superfamily. For most members, the main structural feature is the short N-terminus, and their natural ligands bind directly to the transmembrane region or indirectly affect its conformation by binding to the extracellular loop structure. However, chemokines and glycoprotein hormone receptors have long N-terminal domains.

The Secretin receptor family (Class B) is structurally characterized by a large extracellular domain. All of the 15 members identified so far are peptide hormone receptors.

The Glutamate receptor family (Class C) has a larger two-valved N-terminal that is capable of forming a dimer structure with a unique activation pattern. The members of this family include eight metabotropic glutamate receptors (mGluRs), two GABA receptors (GABABRs), a calcium-sensitive receptor (CASR), a sweet and umami taste receptor (TAS1R1-3), GPRC6A, and some orphan receptors.

Adhesion GPCRs (aGPCRs) are similar to family B GPCRs with large N-terminal domains. A unique feature of aGPCRs is the presence of a unique and highly conserved domain near the TMD, the GPCR autoproteolytic induction domain, that autocatalyzes ECD cleavage from the TMD, resulting in the generation of a "tethers" ligand that activates aGPCR.

GPCR is widely distributed in organs and tissues such as central nervous system, immune system, cardiovascular system, and retina, and participates in the development of the body and the normal function exercise. If the related regulation of intracellular signaling pathways is abnormal, or exogenous pathogenic factors attack the body cells with them as receptors, a series of diseases will occur. Currently, it is considered that there are about 370 GPCR that can be drug targets. Currently, the FDA has approved a total of 476 GPCR drugs on the market, of which 92% are small molecule drugs, 5% are polypeptide drugs, 2% are protein drugs, and only two are antibody drugs (data from https://gpcrdb.org/). According to the current data, the approved drugs targeting GPCR are mainly small molecule drugs, and the fundamental reason for the lack of antibody drugs targeting GPCR is the difficulty of development. Preparation of GPCR antigen is difficult (CUSABIO offers personalized solutions on how to obtain full-length multiple transmembrane proteins in full conformation), because the GPCR antibody screening method needs to be designed according to specific targets, not simply based on affinity screening, and the method of GPCR antibody function identification is not perfect. In recent years, with the development of transmembrane protein expression technology, the in-depth study of GPCR structure and function, and the improvement of GPCR antibody screening methods, more and more GPCR drugs are being developed using protein antibodies.

Erenumab (AMG-334) is a fully human monoclonal antibody developed by Amgen and Novartis, which can specifically bind to calcitonin gene-related peptide (CGRP) receptor and is an antagonist that directly competes with CGRP ligands. CGRP ligands are small neuropeptides with potent vasodilating effects in the setting of chronic pain and migraine. When competing with CGRP, Erenumab offers advantages over small molecule drugs in specificity and potency. The antibody is suitable for treat migraine, vasoconstriction, hot flashes, and stable angina pectoris. The monoclonal antibody was listed in the US and the EU in May and July 2018 respectively. In September of the same year, the US FDA successively approved two new migraine-targeting drugs, respectively: Tiwa's Ajovy (Fremanezumab) and Lilly's Emgality (Galcanezumab). Notably, both Tiwa's Ajovy and Lilly's Emgality target CGRP, while Erenumab targets CGRPR. In addition, in 2020, an anti-CGRP monoclonal antibody (Eptinezumab) developed by Alder Biopharmaceuticals Inc was marketed in the United States. Anti-CGRP monoclonal antibody and CGRPR antagonists are the latest treatment for migraine.

CCR5 is a coreceptor required for HIV cell entry and plays a key role in immune regulation. CCR5 is expressed on monocytes, activated T cells, and dendritic cells (DC) and regulates chemotaxis. Lymphocyte transport and recruitment to target organs through chemokine receptors such as CCR5 play a key role in alloreactive responses. Leronlimab might ameliorate cytokine storm. It is used to restore immune function. Leronlimab has been developed in various stages of clinical development (24 clinical trials in total) against a variety of diseases, including CCR5-tropic HIV infection, metastatic TNBC, metastatic colorectal cancer, nonalcoholic steatohepatitis (NASH), and graft-versus-host disease (GvHD). In 2020, leronlimab was approved for an additional phase IIb/III trial involving 390 patients with severe COVID-19.

Ulocuplumab (BMS-936564) is a CXCR4-specific, fully human IgG4 (S224P) mAb developed by Bristol-Myers Squibb. CXCR4 is not only expressed on leukocytes, platelets, and other non-hematopoietic cells that make up the tumor stromal microenvironment, but is also overexpressed in most human cancers and, together with its endogenous ligand CXCL12, plays a fundamental role in cancer pathogenesis involving proliferation, adhesion, metastasis, angiogenesis, and survival. Ulocuplumab has been evaluated in two phase I clinical trials in subjects with various hematologic malignancies, including acute myeloid leukemia (AML), multiple myeloma (MM), chronic lymphocytic leukemia (CLL), follicular lymphoma (FL), and diffuse large B-cell lymphoma (DLBCL). And showed encouraging results. This antibody is now in phase 2 clinical development for Waldenstrom's macroglobulinemia.

Glutazumab (also known as GMA102 or GMA105) is a novel, long-acting, anti-GLP-1R humanized antibody developed by GMAXBIO for T2D and obesity that is fused to a GLP-1 fragment to target the dual receptor binding site to act against diabetes. This antibody suggests an alternative targeting strategy by incorporating the function conferred by the antibody by fusing a peptidyl ligand, such a construct exhibiting superior safety and tolerability over its class of GLP1 analogues. The current state of development is in clinical phase II.

Avdoralimab (IPH-5401) is a monoclonal antibody developed by Innate pharma that specifically binds to C5AR1, which is expressed on myeloid-derived suppressor cells (MDSCs) and neutrophils, blocking the binding of C5a to C5aR1. It was originally developed in Australia for clinical use in rheumatoid arthritis. But IPH-5401 is now being studied in a phase I/II combination study (NCT03665129) and the checkpoint inhibitor durvalumab (anti-PD-L1) in patients with selected solid tumors (NSCLC, HCC, RCC, urothelial carcinoma) in the immuno-oncology context. Antagonism by this monoclonal antibody blocks MDSCs in the TME, thereby enhancing CD8 T cell infiltration and function. This monoclonal antibody is currently in the highest state of development in clinical phase II.

Plozalizumab (MLN-1202, Lozalizumab) is a product developed by Takeda Oncology and targeting human chemokine receptor 2 (CCR2) in the human body. Plozalizumab is a highly specific humanized monoclonal antibody that interacts with CCR2 and inhibits MCP-1 binding. When plozalizumab binds to CCR2 and prevents endothelial-derived CLL2 (monocyte chemoattractant protein -1 or MCP1) from binding to its receptor CCR2, it may inhibit the activation of CCR2 and thus inhibit angiogenesis, tumor cell migration, and tumor cell proliferation. In addition, the drug may reduce C-reactive protein (CRP) levels. Although the antibody entered the Phase 2 study of multiple disease indications, two Phase 2 clinical trials for diabetic nephropathy (NCT02410499) and atherosclerotic cardiovascular disease (NCT02388971) were canceled. The highest state of development for this antibody drug is currently in Clinical Phase II.

Volagidemab (REMD-477) is a human anti-glucagon receptor antibody developed by kosimde against juvenile type I diabetes (T1D) and type II diabetes (T2D) by blocking glucagon receptors (GCGR) signal transduction to increase liver glucose uptake, reduce liver glycogen decomposition and gluconeogenesis, and promote glycogen synthesis, in order to achieve the effect of hypoglycemia (CK060182). Up to March 2021, there were multiple experimental projects under development, of which, the research and development of type I and type II diabetes were in clinical stage II, the study on glucose intolerance was in clinical stage I, and the study on metabolic disorders was in the preclinical stage (CK060183).

In addition, some were in clinical phase I and preclinical programs. 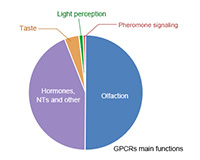 The important role of GPCR in the drug target protein determines its importance in the life sciences. CUSABIO can provide the products you need for your research. Currently, we have 183 GPCR-related products: 70 recombinant proteins, 89 antibodies, and 24 ELISA kits.... Read More>> 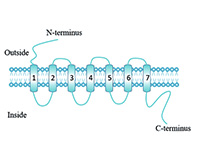