TROP2 belongs to the TACSTD family and is a cell surface glycoprotein encoded by the TACSTD2 gene. It is also known as tumor-associated calcium signal transducer 2 (TACSTD2), epidermal glycoprotein 1 (EGP-1), and gastrointestinal tumor-associated antigen (GA733-1) and surface marker 1 (M1S1) [1]. TROP2 is overexpressed in various malignant tumors, and is an oncogene related to the occurrence, invasion and metastasis of malignant tumors.

1. The Discovery of TROP2

3. The Expression of TROP2

4. The Function of TROP2

6. Relationship between TROP2 and Tumor

1. The Discovery of TROP2

TROP2 is a membrane antigen that first identified and isolated by monoclonal antibody GA733-1, hence it is known as GA733-1 [2].

The TROP2 gene is located on the short arm of chromosome 1. The specific location is 1p32.1 [3]. The full length of the gene is 9072 bp, no intron, only one exon. The role of TROP2 in tumorigenesis appears to be evolutionarily conserved. The similarity of mouse TROP2 to human homologous gene sequence was 87.4%.

The primary structure of the TROP2 protein is a 36 kDa polypeptide consisting of 323 amino acids, a single transmembrane surface glycoprotein.

This protein seems to be highly conserved in species. The cytoplasmic tail of this molecule contains a highly conserved phosphatidylinositol 4, 5-bisphosphate (PIP2) binding sequence, suggesting that PIP2 plays an important role in signal transduction of TROP2. In addition to the PIP2 binding motif, it also contains conserved tyrosine and serine phosphorylation sites. Mutation of the serine residue at position 303 abolished the ability of TROP2 to stimulate tumor growth. Phosphorylation of this residue is the responsibility of protein kinase C (PKC). 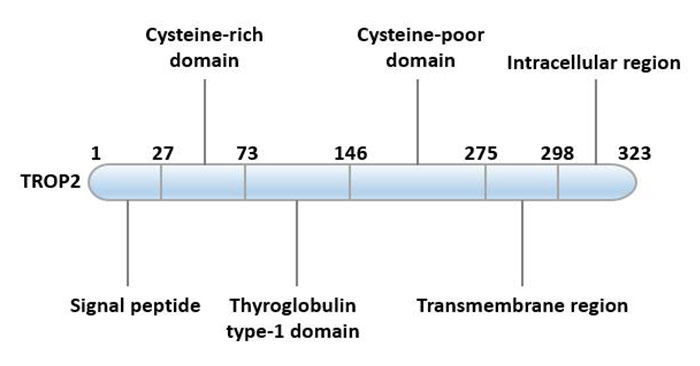 3. The Expression of TROP2

TROP2 mRNA can be detected in normal tissues, including normal keratinocytes, kidneys, lungs, ovaries, and testes. Normally, TROP2 is mainly expressed in epithelial cells and plays an important role in the development of embryonic organs [5]. TROP2 is low in normal tissues and overexpressed in various malignant tumors [6] [7].

4. The Function of TROP2

TROP2 is a single-copy gene in human cells that encodes type I transmembrane glycoprotein, which is overexpressed in various malignant tumors. It is a gene closely related to tumor discovered in recent years, which is a signaling molecule that can regulate the growth of tumor cells. TROP2 is homologous with serum IGF-II binding protein and has signal transduction function. In addition, TROP2 acts as a glycoprotein receptor on the epithelial membrane surface and acts as a transmembrane transducer for intracellular calcium signaling.

TROP2 is a gene closely related to tumors. It promotes tumor cell growth, proliferation and metastasis by regulating calcium signaling pathway, cyclin expression and reducing fibronectin adhesion. TROP2 can also interact with beta-catenin proteins in the Wnt signaling cascade, and play a role in the transcription of nuclear oncogenes and cell proliferation [8].

The signal transduction of TROP2 includes the following types:

The intracellular tail serine residues (S303) of protein TROP2 are phosphorylated by protein kinase C (PKC), which promotes the hydrolysis of 4, 5-diphosphate phosphatidylinositol (PIP2) into IP3 and DAG. 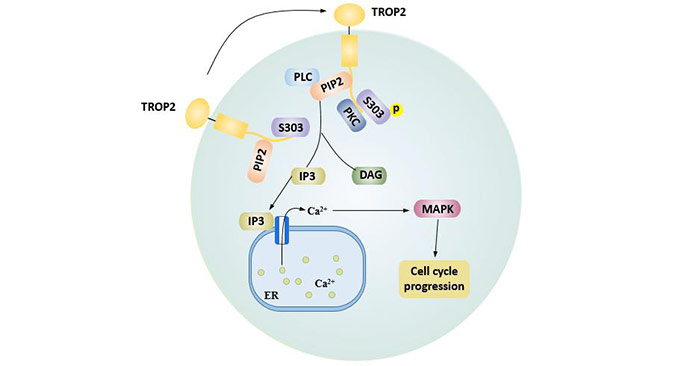 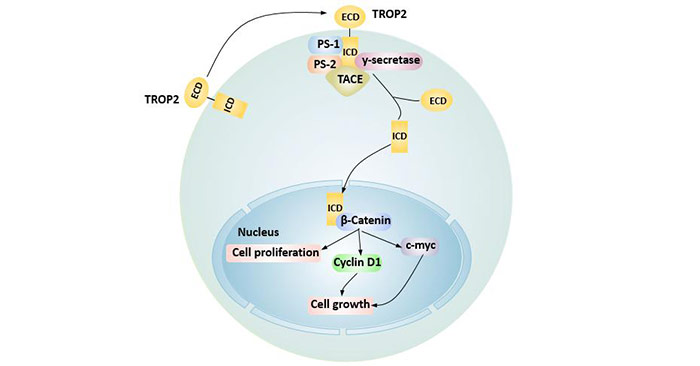 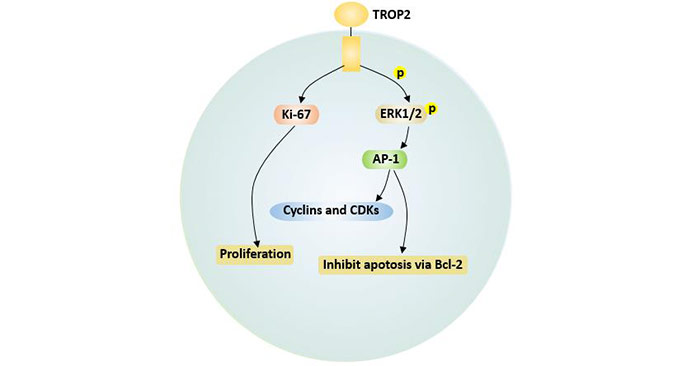 TROP2 promotes the accumulation of cytoplasmic RACK1 in the cell membrane, making it close to integrin β1, reducing the binding of fibronectin to integrin β1.

TROP2 forms a complex with integrin β-1 and Talin proteins, which activates Src and FAK. Cell adhesion is regulated by the integrin β1-RACK1-Src and FAK signaling axes [13], thereby reducing the adhesion of tumor cells and promoting its metastatic. 6. Relationship between TROP2 and Tumor

TROP2 is highly expressed in a variety of tumors.

At present, the relationship between the female reproductive system, especially endometrial cancer and TROP2, is much studied.

The high expression of TROP2 protein is associated with the high invasiveness of ovarian cancer.

In conclusion, the elevated expression of TROP2 is closely related to malignant tumors of female reproductive system and the degree of malignancy of diseases.

TROP2 is also closely related to male reproductive system tumors. Gene profiling of the cells isolated from solid tumor tissues of prostate cancer [15] showed abnormal expression of the TROP2 gene. This suggests that TROP2 is related to the occurrence and development of prostate cancer, and its abnormal expression plays an important role in the biological behavior of cancer cells.

Overexpression of TROP2 is present in pancreatic adenocarcinoma. It is significantly associated with lymph node metastasis, tumor grade, and poor patient survival, which suggesting that TROP2 can be used as a unique biomarker for prognosis of pancreatic cancer.

In addition, TROP2 is also highly expressed in esophageal cancer tissues and cholangiocarcinoma.

TROP2 is closely related to the malignant degree, proliferation and angiogenesis of glioma, and may be helpful to the targeted therapy of glioma.

TROP2 is a transmembrane protein that is overexpressed on a variety of tumors and is a natural candidate for targeted therapeutic development. The limitations of tissue expression of TROP2 reduce the toxicity of the treatment, which is also the advantage of targeting TROP2 treatment.

IMMU-132, a conjugate of SN-38, a metabolite of irinotecan, to an anti-Trop-2 antibody. It can be used to treat a variety of epithelial malignancies such as breast cancer (triple negative breast cancer), ovarian cancer, small cell lung cancer, etc. [21].

In addition, other humanized anti-TROP-2 IgG-SN-38 conjugates, such as the anti-TROP-2 hRS7-CL2A-SN-38 ADC, have been shown to have significant anticancer effects in xenograft models of several tumor cell lines (Calu-3, Capan-1, BxPC-3, and COLO 205).

Viral-like particles (VLPs) are highly immunogenic and versatile immunostimulants that can be used as cancer vaccines by modifying exogenous proteins to their cell membranes. It has been found that a virus-like particle that incorporates TROP2 can be used as a potential immunotherapeutic method for pancreatic cancer [22].

In the article published on Biochemical and Biophysical Research Communications in 2019. Jinrong Liu [23] et al. constructed TROP2-IgG antibodies by eukaryotic expression system based on previously constructed TROP2-Fab antibodies. It was demonstrated that this novel human monoclonal TROP2-IgG antibody has an inhibitory effect on tumors in vitro and in vivo experiments.

In the article published on International Journal of Oncology in 2018. Lianhua Z et al. [24] demonstrated that curcumin inhibits proliferation and movement of bladder cancer cells by TROP2.

In the article published on Oncology Reports in 2019. HOU et al. [25] showed that activation of the JAK2/STAT3 pathway promoted the growth and metastasis of glioblastoma cells. This study provided the basis for further understanding of the role of TROP2 in glioblastoma, indicating that it is a promising biomarker and therapeutic target for glioblastoma patients.