Does TNF Superfamily Inhibit Cancer or Promote Its Development?

The tumor necrosis factor superfamily (TNFSF) consists of 19 ligands and 29 receptors. TNF superfamily members induce a variety of biological effects, including cell growth, differentiation, and death by the interaction of ligand and receptor. Currently, it is known that tumor necrosis factor (TNF) superfamily members play an important role in the regulation of inflammatory response, immune response to infection and tissue homeostasis. In addition, it may be related to the etiology of some acquired immunodeficiency diseases and genetic diseases.

1. History of The TNFSF Family

8. Therapy Based on The TNF Superfamily

1. History of The TNFSF Family

The first discovered members of the TNFSF family were two cytotoxic factors isolated by Aggarwal and colleagues in 1984: one from macrophages (molecular weight 17kD), named TNF-α; the other from lymphocytes (molecular weight 20kD), it is named lymphotoxin [1].

Since the amino acid sequence homology of the two cytotoxic factors is 50% [2] and they bind to the same receptor, they are named TNF-alpha and TNF-beta respectively.

All other members of the family, with the exception of TNF-alpha and TNF-beta, have been identified by homology to human cDNA sequences. In this way, 19 members of the TNF superfamily and 29 receptors have been identified. These members play a highly diverse role in the organism. Among these receptors, three TNF receptors (TNFRSF22-mDcTRAILR2/TNFRH2, TNFRSF23-mDcTRAILR1/TNFRH1, and TNFRSF26-mTNFRH3) were found only in mice [3].

The TNFSF ligand molecule is a trimeric of type II transmembrane protein, and the TNF ligand has a common structural motif, the C-terminal TNF homology domain (THD), through which TNF ligand binds to TNF receptor. THD is a long sequence of 150 amino acids containing a conserved framework of aromatic and hydrophobic residues. THDs have almost identical triple folding and bind to form trimer proteins.

The forms in which the TNF ligand functions include two types: membrane-bound ligands or soluble ligands. Although most ligands are synthesized in the form of membrane-bound proteins, soluble forms can be produced by restriction proteolysis [4].

There are 19 members of the tumor necrosis factor super-family ligand, and their specific information is shown in Table 1.

The TNF family receptor is a type I or type III membrane protein with a different number of cysteine-rich domains (CRDs). The number of CRDs varies from 1 to 4 for different receptors.

Most receptors of the TNF superfamily can be divided into two categories: one with an intracellular death domain (DD) and the other without. For information on TNF superfamily receptors, see the article: Tumor Necrosis Factor Receptor Superfamily and Apoptosis.

Another feature of some ligand receptor interactions in the TNF superfamily is the phenomenon of “reverse signaling”: the transfer of signals from receptors to cells with transmembrane ligands [7]. Reverse signaling has been reported in CD30 ligands [8].

Through the binding of receptors and ligands, downstream signal transduction is initiated to induce cell growth, differentiation and apoptosis, which plays an important role in the immune regulation of tissue self-stability and inflammation. 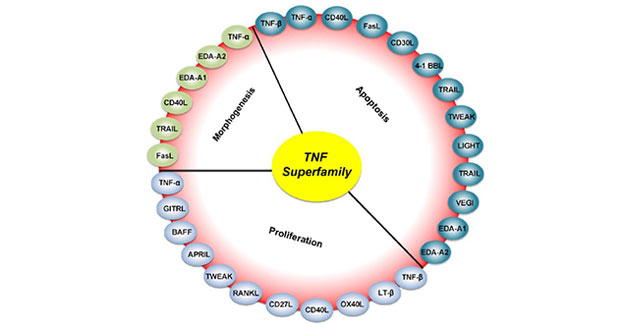 These superfamily members modulate the immune response through a costimulatory, maturation, and cell death signaling pathway. In addition, they play an important role in intraosseous balance, exocrine gland development, and the nervous system.

Most members of the TNF superfamily have both beneficial and potentially harmful effects [16].

Some of the deleterious activities of TNF and its superfamily members are thought to be mediated through activation of NF-κB.

Members of the TNF family are associated with a range of pathophysiology, including cancer, neurological, cardiovascular, pulmonary, autoimmune, and metabolic diseases.

Studies have shown that TNFSF15 level is decreased in tumor cells, including breast cancer, bladder cancer, ovarian cancer, prostate cancer, liver cancer and colorectal cancer. This suggests a link between TNFSF15 and cancer.

TWEAK and its receptor Fn14 signaling pathway are associated with the development of lung diseases such as acute lung injury, asthma and lung cancer. Fn14 antibody or TWEAK neutralizing antibody can alleviate renal interstitial fibrosis caused by many factors.

TNF-α is expressed in nerve cells and has an important influence on the survival of these cells by activating NF-κB signaling. TNF-α is currently known to be associated with depression, bipolar disorder, epilepsy, Alzheimer's disease, Parkinson's disease, and multiple sclerosis. In addition, TNF-α also plays an important role in the occurrence and development of cardiovascular diseases.

We use systemic lupus erythematosus (SLE) as an example to illustrate the relevance of TNFSF in autoimmune diseases.

SLE is an autoimmune disease that is associated with the development of autoreactive T and B cells and autoantibody formation.

Systemic lupus erythematosus is associated with members of the TNF superfamily.

BAFF is a lymphocyte co-stimulatory factor. It has important immunomodulatory effects in B cell growth and development, antibody type switching, and T cell activation. BAFF plays an important role in the pathogenesis of SLE.

Studies have shown a negative correlation between APRIL levels in serum and anti-dsDNA antibody titers and severity of SLE [17].

TRAIL levels are elevated in SLE patients, and TRAIL can accelerate the apoptosis of PMNs in lupus patients and participate in T cell-induced monocyte apoptosis.

CD27/CD70 can promote T cell proliferation and differentiation, induce the formation of CTL, and promote the differentiation of B cells into plasma cells.

OX40/OX40L is a pair of important costimulatory molecules in the immune response process, mainly in the late stage of T cell immune response. It plays an important role in the development of Th1 and Th2 cells.

TNFSF plays different roles in SLE. They act as synergistic molecules to stimulate lymphocyte activation, proliferation, or induce apoptosis, and participate in the occurrence and development of diseases.

8. Therapy Based on The TNF Superfamily

TNF has been considered for many years to be a pro-inflammatory molecule that plays a role in inflammation, apoptosis, proliferation, invasion, angiogenesis, metastasis and morphogenesis. Members of the TNF superfamily play an important role in the pathogenesis of a variety of human diseases, and their role in immune, cardiovascular, neurological, pulmonary, and metabolic diseases is now increasingly apparent. This superfamily is therefore an active target for drug development. TNF blockers have recently been approved to treat rheumatoid arthritis, psoriasis, Crohn's disease and osteoporosis.

Several antagonists targeting TNF family members have been approved by FDA and some are in clinical trials. The drugs currently approved are targeting TNF-alpha. Drugs targeting other members of the TNF superfamily are in various stages of research.