Complement was first discovered by Jules Bordet in the 1890s as a heat-labile component of normal plasma that causes the opsonization and killing of bacteria by antibodies [1]. The complement system is made up of a large number of distinct plasma proteins that react with one another to opsonize pathogens and induce a series of inflammatory responses that help to fight infection [2]. At present, the cDNA of various complements has been successfully cloned, and some genetic engineering products have been obtained.

1. How is The Complement System Activated?

1. How is The Complement System Activated?

There are three distinct pathways through which complement can be activated on pathogen surfaces, including classical pathway, lectin pathway and alternative pathway. These pathways depend on different molecules for their initiation, but they converge at C3, resulting in the formation of the activation products, C3a, C3b, C5a and the membrane attack complex (C5b-9) (Fig. 1). 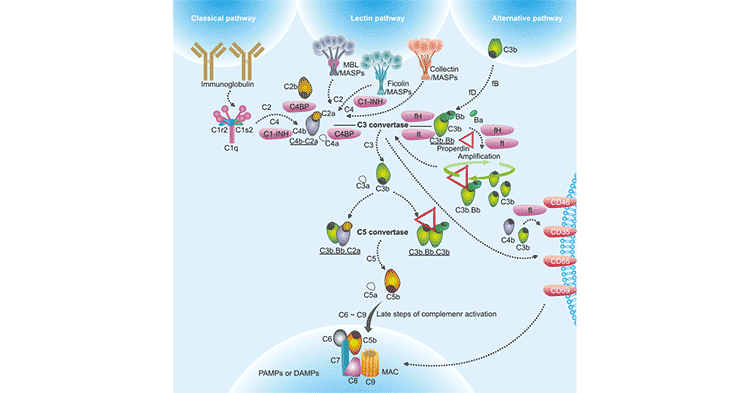 *this picture is derived from reference 3.

The classical pathway (CP) is activated by the C1 complex comprising C1q, C1s, and C1r upon binding to the Fc portion of the IgM or IgG immune complex. Activation of C1s and C1r occurs as a consequence of C1q binding to the exposed Fc portion of IgG or IgM. C1s then cleaves C4 and C2 to form the CP C3 convertase, C4bC2a [4]. The lectin pathway (LP) is activated when either mannose binding lectin (MBL) or Ficolin bind to carbohydrate moieties on surfaces of pathogens including yeast, bacteria, parasites and viruses. Both MBL and Ficolin circulate in the serum as complexes with MBL-associated proteins (MASPs) [5]. The alternative pathway (AP) activation is triggered by direct tick-over activation of C3 thioester in solution regardless of trigger, and creates its own C3 convertase (C3b•Bb) when activated C3b covalently bind to the target surfaces in contact with factor B (fB) and the enzyme factor D (fD) [6] [7].

The complement system is an important part of innate immunity and a powerful driving factor for inflammation. The complement system plays a critical role in inflammation and defensing against some bacterial infections. Complement may also be activated during reactions against incompatible blood transfusions, and during the damaging immune responses that accompany autoimmune disease.

Atherosclerosis (AS) is initiated by endothelial damage or dysfunction and the formation of fatty streaks. The formation of fat streaks is caused by the capture of lipoproteins and plasma molecules such as immunoglobulin, complement C3 or C-reactive protein (CRP). Lipoproteins can be oxidatively modified in the arterial wall, which may be the main trigger of complement activation.

Similarly, CRP and other blood-derived proteases are also involved in the activation of complement in the blood vessel wall. Complement activation can promote chronic leukocyte chemotaxis, foam cell formation and vascular smooth muscle cell proliferation, which is also the main pathophysiological mechanism involved in the initial stage of AS. The next stage of the AS process is blood lipid plaques, which are characterized by foam cell necrosis or apoptosis, and lipid necrosis core caused by the accumulation of extracellular cholesterol. Cholesterol crystals can further induce complement activation, and the complement system can also participate in apoptotic cells.