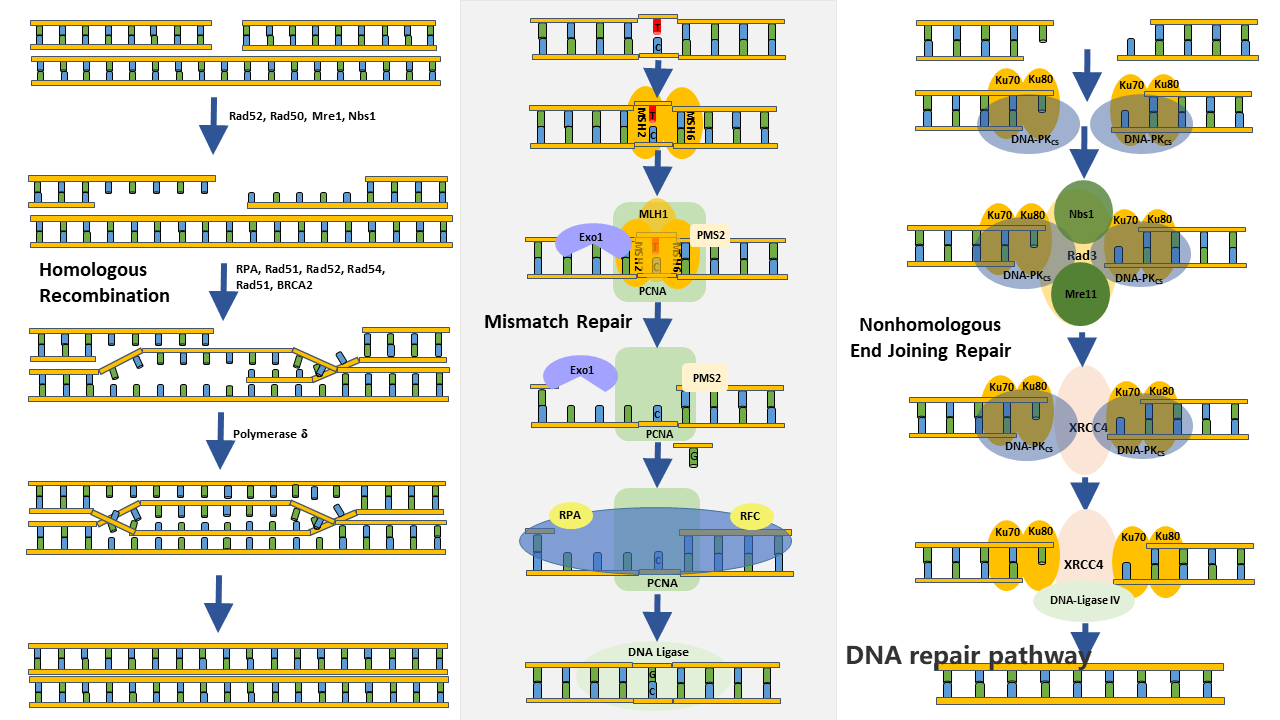 What is DNA Repair?

The Significance and Function of DNA Repair

DNA carries the genetic information that organisms need to survive and reproduce, so maintaining DNA molecules integrity is crucial to cells. If DNA damage or changes cannot be corrected, it may affect the function or survival of somatic cells, fertility in reproductive cells and cause a gene mutation that is likely to develop into tumor cells. Therefore, cells acquire the ability to repair DNA damage or alteration during evolution. And it is also why organisms can maintain their genetic stability. Furthermore, DNA is the only biological macromolecules that can be repaired in cells.

DNA repairing normally restores the DNA structure to its original function, but sometimes it does not eliminate DNA (incomplete repair) damage but just allows cells to tolerate it and continue to survive.

Therefore, the DNA repair system guarantees the genetic stability of species, which is of great significance to reduce the incidence of defect repair.

The Classification of DNA Repair Pathway

Photoreactivation is also called direct repair. It is a specific repair method that only repair the pyrimidine dimers on the DNA double helix structure caused by ultraviolet radiation.

Mismatch repair (MMR) refers to a repairing way adopted when DNA molecules mismatches due to the insertion or deletion of bases during the replication process.

Excision repair is ubiquitous in all kinds of biological cells and is the main DNA repair mechanism of human cells. Excision repair mainly targets at bases and nucleotides. In base excision repair (BER), glycosylase recognizes and removes damaged bases by hydrolyzing the glycoside bonds. Nucleotide excision repair (NER) recognizes distortions in the double helix such as thymine dimer or the distortion caused by the presence of large chemical additions to the base.

Homologous recombination repair, also known as double-strand break repair, is a DNA repair process in which undamaged DNA single strand is used as a template to complete the resynthesis of the damaged one. And the two strands are homologous or identical.

SOS repair refers to a DNA repair pathway induced when cells are in a critical state because of serious damage of DNA. The repair can only maintain the integrity of the gene and improve the rate of cell survival. Because there are many mistakes left, it is also called error-prone repair. SOS repair makes cells easier to mutate.

The Mechanism of DNA Repair Pathway

Mismatch repair: In E.coli, the dimer of mismatched repair protein MutS is responsible for detecting the mismatches. MutS scans the DNA and identifies the mismatches where they distort the DNA skeleton. The MutS surround the DNA containing the wrong pairing, inducing a noticeable kink in the DNA and a conformational change in the MutS itself. And then, the complex formed by MutS and the DNA containing the wrong pairing recruits the second protein MutL. MutL activates MutH. MutH is an endonuclease that makes an incision in a chain near the mismatch site. A particular DNA helicase, UvrD unwinds the DNA from the incision to the mismatch site. And then the exonuclease digests the untwisted single strand, extending and crossing the fault sites of the nucleic acid. Finally, the single-strand gap is filled by DNA polymerase III and conjugated by DNA ligase.

Eukaryotic cells can also repair mismatched pairs by using homologs of MutS--MSH and MutL--MLH ＆ PMS. Differently, the incision near the DNA mismatch site is the gap between Okazaki fragment and the previously synthesized DNA strand.

Nucleotide excision repair (NER): NER is mainly mediated by three repair enzymes. First, the nuclease recognizes the site of damage of the DNA and cuts phosphodiester bond in the 5' side at the damage site. Different DNA damage requires different specific endonucleases to recognize and cleave. DNA resynthesis by using relatively intact strands as templates by DNA polymerase at the incision. And then, the damaged DNA fragment was excised by 5'→3' exonuclease. Under the catalysis of DNA polymerase, the resected gap was filled in the 5'→3' direction DNA strand with the entire complementary strand as a template. Finally, the newly synthesized DNA fragment is ligated to the original DNA strand by DNA ligase.

The Applications of DNA Repair

DNA damage includes many changes in DNA molecules, which has important toxicological significance. The generation of DNA damage is a key step in the early detection of chemical carcinogenesis. And DNA damage can be used as an important exposure biomarker to evaluate the genetic toxicity of environmental chemicals, the environmental exposure level of individual organisms and the risk of cancer.

The human body has a high success rate of self-genetic repair, but sometimes it fails. When something unexpected happens, the repair system goes awry so that the cell cannot be repaired. At this point, cells begin to age, die, and then most of these cells are swallowed by other cells. Some cells even start dividing and become cancerous, ultimately causing cancer in the body. At present, there are two leading ideas to solve cancer, one is to repair DNA to make cancer good, and the other is to continue to destroy DNA to let cancer die.