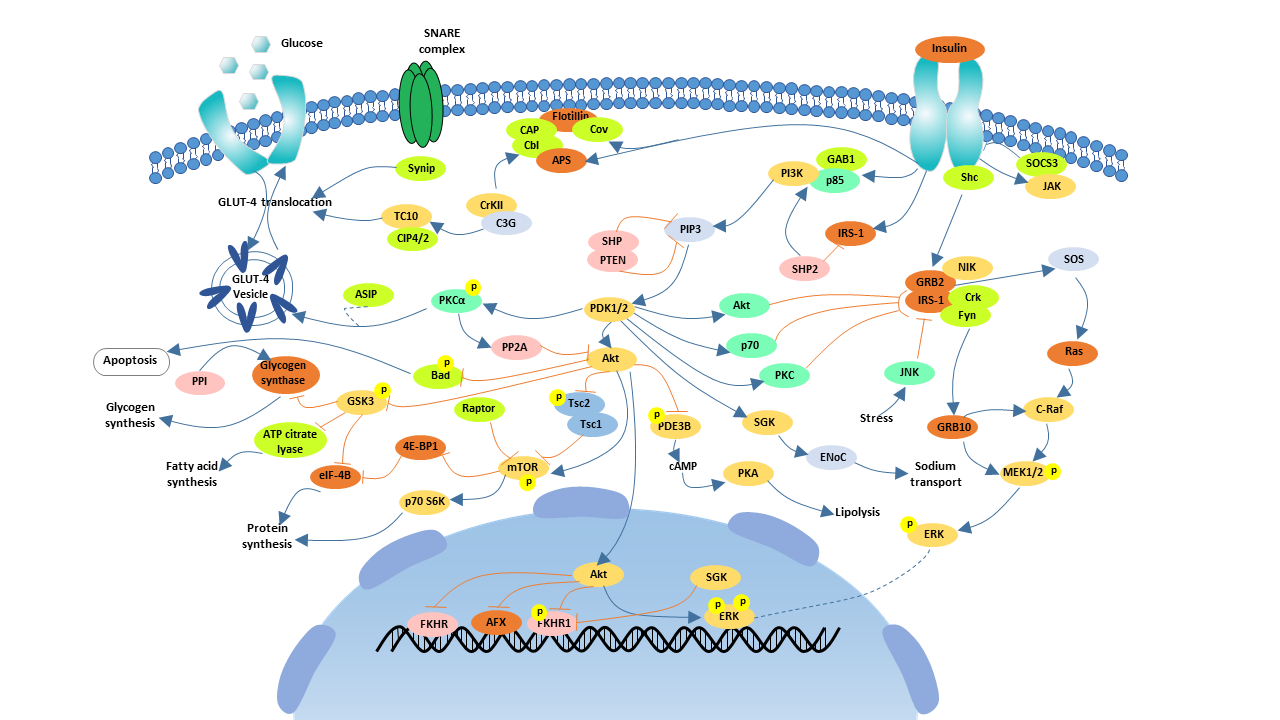 Sugar levels in the blood rise after eating, and the beta cells of pancreatic islets secrete insulin (Ins) to control the blood glucose in a normal range. Insulin is a protein hormone which is a key to unlock the cells, allowing the glucose to enter the cells and thereby lowering blood glucose levels.

The Role of Insulin

Insulin is the only hormone in the body that lowers blood sugar. When insulin binds to its receptors in target cells, it promotes the entry of extracellular glucose into these cells, where it is stored as glycogen. At the same time, insulin also inhibits the re-decomposition of glycogen into glucose, lowering blood sugar. Besides, insulin facilitates the synthesis of protein & fat and prevents the conversion of protein & fat to glucose. Inadequate insulin secretion can cause high blood sugar and may lead to diabetes.

What is Insulin Signaling Pathway?

The insulin signaling pathway is an approach that regulates glucose homeostasis by controlling important processes such as glucose and lipid metabolism.

The function of Insulin Signaling Pathway

The main function of the insulin signaling pathway is to assist insulin in regulating blood glucose homeostasis in the body, and works along with glucagon.

The Process of Insulin Signaling Pathway

The regulatory effect of insulin on metabolism is mainly mediated by the PI-3K (phosphoinositol 3 kinase) pathway. After activation of PI3K by IRS1, activated PI3K, catalyzes the phosphorylation of phosphatidylinositol (PI) across the membrane to produce PIP2 (phosphatidylinositol 4,5-bisphosphate) and PIP3 (phosphatidylinositol 3,4,5-triphosphate). PIP3 acts as a second messenger to recruit Akt and PDK1 (3-phosphoinositide dependent protein kinase-1) into the envelope region (PTEN pathway), where phosphorylation of PDK1 activates the serine/threonine residues of Akt. Akt regulates the translocation of the insulin-sensitive glucose transporter Glut4 within muscle and fat cells to the cell membrane for the extraction of glucose. Akt also phosphorylates glycogen synthase kinase (GSK), deactivating the enzyme, and inhibiting the activity of glycogen synthase (GS). Gsk-3 also inactivates eukaryotic promoter 2B, promoting the synthesis of protein-mediated by insulin. Insulin is phosphorylated by mTOR (molecular target of rapamycin) kinase and 4E-BPI, which promotes protein synthesis at the translation level. Meanwhile, this pathway also mediates the survival pathway of beta cells, which is closely related to the growth, proliferation, differentiation, and apoptosis of beta cells.

Studies have also found that insulin-mediated PI3K/Akt signaling pathway dysfunction is closely related to the onset and subsequent progression of Alzheimer's Disease (AD) in mice.

Other experiments have shown that improving the metabolism and signaling pathway of central insulin in mice can also help relieve the symptoms of mental diseases, such as schizophrenia and depression.