Fc Receptor (FcR) is a type of cell surface protein that can specifically bind to the Fc segment of the C-terminal functional domain of immunoglobulin (Ig) heavy chains, and is crucial in the process of antibody-dependent immune responses.

The Fc receptor of IgG type antibodies is FcγR, and FcγR can be divided into three subtypes according to the affinity of Fc fragment, including FcγRI, FcγRII and FcγRIII (the sequence of affinity with IgG is FcγRI> FcγRIII> FcγRII). Each type is encoded by a specific gene in the same region of the long arm of chromosome 1. Each FcγR also has several closely related genes that have different antibody affinities due to different molecular structures. Based on this, FcγRII can be further divided into three subclasses, FcγRIIa (CD32a), FcγRIIb (CD32b), and FcγRIIc (CD32c), and FcγRIII can be further divided into two subclasses, FcγRIIIa (CD16a) and FcγRIIIb (CD16b). 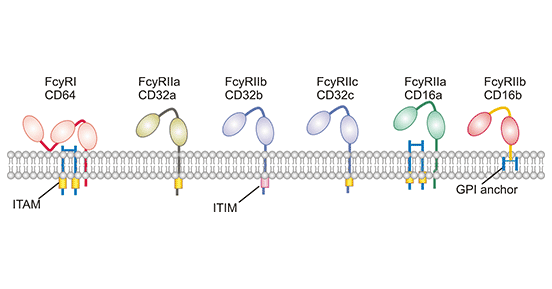 As shown in Figure 1, the basic structure of FcγR is similar, composed of three parts, an extracellular region, a transmembrane region and an intracellular tail. In the extracellular region, FcγRII and FcγRIII contain two Ig-like domains, while FcyRI contains three Ig-like domains. It is a property that allows FcγRI to bind signaling IgG (or monomers). Note that all FcγRs must bind multiple IgG in the immune complex to be activated. Among FcγRs, FcγRI, FcγRIIa, FcγRIIc, and FcγRIIIa possess canonical cytoplasmic ITAM signaling domains that activate effector immune cells. In contrast, FcyRIIb is the only inhibitory FcyR with a cytoplasmic ITIM that mediates signal inhibition.

In addition, IgG has another very important cell surface receptor: FcRn (neonatal Fc receptor). The structure of FcRn is similar to that of MHC-I molecules, which can mediate the transfer of IgG from the mother to the infant through the placenta, and also help the IgG in breast milk to pass through the small intestinal cells of the nursing infant.

The receptor that specifically binds to the Fc segment of IgE is FcεR. According to the different affinity, FcεR can be further divided into FcεRI and FcεRII. FcεRI is expressed on the surface of eosinophils and mast cells and binds to IgE monomers with high affinity. The interaction of antigens with IgE bound to FcεRI can trigger the release of inflammatory mediators and cytokines. FcεRI is composed of a tetramer of an IgE-binding glycoprotein (α chain), a transmembrane β chain and a short (9KDa) dimeric γ chain (identical to the γ chain linked to FcγRIII). Its expression on the cell membrane requires the presence of gamma chains. FcεRII binds IgE with low affinity. Distributed on B cells, monocytes, eosinophils and other cells. It has the function of regulating and effector. FcεRII does not belong to the Ig superfamily and is similar to animal C-type hemagglutinin.

The FcRs corresponding to IgA, IgM and IgD are FcαR, FcμR and FcδR, respectively. FcαR (CD89) is a transmembrane glycoprotein with a molecular weight of 60 kDa and is a member of the Ig superfamily. There are two C2 domains outside the cell membrane, which are medium-affinity receptors, mainly expressed on the surface of monocytes, macrophages, neutrophils and other cells, mediating phagocytosis, ADCC and the release of inflammatory mediators. Neutrophil surface FcαR binds serotype and secretory IgA1 and IgA2, and heat or chemically agglutinated IgA stimulates neutrophil degranulation. FcμR is persistently expressed on B-lineage cells (from pre-B cells to mature N-lymphocyte stages) and is also present on many activated T lymphocytes. FcδR is a 40 kDa surface membrane protein.

Furthermore, in 2000, Shibuya et al. discovered Fcα/μR, a novel IgM and IgA FcR, in humans and mice. Fcα/μR is constitutively expressed on most B lymphocytes and macrophages in the spleen and secondary lymphoid follicle centers. Fcα/μR is involved in the primary stage of microbial immune defense.

CUSABIO has listed some popular targets related FcR. Click on the corresponding target to view all the reagents related to the target.