Monocytes, also known as phagocytes, are the largest blood cells in the blood and the largest white blood cells. They are an important part of the body's defense system. Compared with other blood cells, monocytes contain more non-specific lipase and have stronger phagocytosis. It has obvious deformation movement, can phagocytose and remove injured and aging cells and their debris, and can also participate in the body's immune response.

Monocytes have hundreds of different receptors, a few of which are intracellular but the vast majority are located on the cell membrane. After they bind to the corresponding ligands, they perform sensing and effector functions, including capturing pathogenic foreign bodies, strengthening the regulation of chemotaxis, immune adhesion, phagocytosis, and mediating cytotoxicity. For example, immunoglobulin Fc receptors and complement receptors can bind to the Fc fragment of IgG and the complement C3b fragment, respectively, thereby promoting the activation of monocytes and regulating phagocytosis. In addition, monocytes express receptors for various cytokines, hormones, neuropeptides, polysaccharides, glycoproteins, lipoproteins, and lipopolysaccharides, which can sense a variety of stimuli that regulate their function.

Among them, some monocyte receptors distributed on the cell surface can be used as monocyte surface markers and play an important role in monocyte typing. Monocytes can be divided into three categories according to their surface receptors: 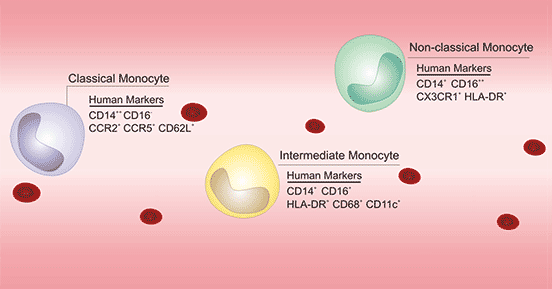 Compared with the other monocytes, classical monocytes have stronger capabilities of phagocytic and antimicrobial activities, sensing and immune responses, and cell migration. These monocytes have high peroxidase activity and are more efficient in the production of reactive oxygen species (ROS). In addition, they expressed higher levels of chemokine receptors, suggesting the potential for migration to sites of injury and inflammation.

Human classical monocytes showed high expression of CD14, but lacked CD16, and were denoted as CD14++ CD16-. CD14 is a co-receptor for bacterial lipopolysaccharide and is specifically expressed in monocytes and macrophages. CD16 is an antibody (IgG) receptor expressed by two nearly identical genes, FCGR3A and FCGR3B. In addition, high levels of CCR2, CCR5 and CD62L are also present in human classical monocytes.

CUSABIO has listed some popular targets related monocyte receptor. Click on the corresponding target to view all the reagents related to the target.