B cell receptor (BCR), also known as B cell antigen receptor, is usually a heterodimeric complex composed of an antigen-binding subunit (membrane surface immunoglobulin, mIg) and a signaling unit. The antigen-binding subunit is a tetramer composed of two heavy chains (H) and two light chains (L) (κ or λ chains), of which the H chain consists of four parts of gene fragments, including 65-100 types of variable regions (VH), 2 types of variable regions (DH), 6 types of binding regions (JH) and constant region (CH); L chain is composed of Three parts of gene fragments, involving variable region (VH), binding region (JH) and constant region (CH) composition. The signaling unit is a heterodimeric protein in which Ig-alpha (Igα, CD79A) and Ig-beta (Igβ, CD79B) are linked by disulfide bonds. The cytoplasmic domain of Ig-alpha is longer and contains 61 amino acids; the cytoplasmic domain of Ig-beta contains 48 amino acids (as shown in Figure 1). 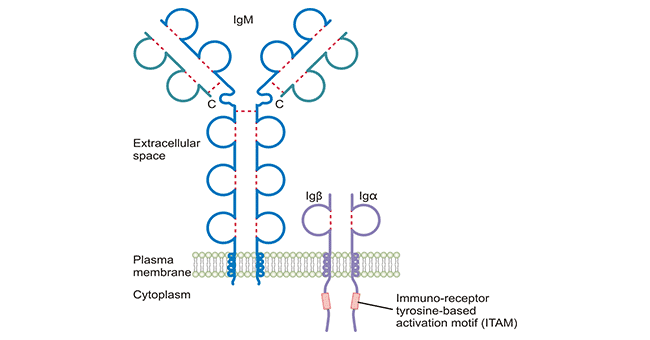 Figure 1. The structure of BCR

CD20 is a cell surface transmembrane phosphoprotein expressed only on B lymphocytes. CD20 exists as an oligomer on the surface of B lymphocytes and available studies have demonstrated that CD20 forms tetramers on the surface of B cells. The interaction between CD20 and B cell antigen receptor (BCR) membrane-type IgM (sIgM) has been confirmed. Upon activation of B cells, the BCR-CD20 complex dissociates and Phosphoproteins, calmodulin-binding proteins, are temporarily recruited to CD20 and are thus involved in intracellular signaling. As of July 23, 2021, relevant data shows that there are currently 27 CD20 antibody drugs on the market, and 93 CD20 biological drugs in the clinical stage, including 22 CAR-T gene therapies and 71 antibody drugs. In addition to the sharp increase in the number of biopharmaceuticals targeting CD20, important breakthroughs have also been made in the research on related indications. More reading related CD20>>

CD19 is a surface protein expressed on B lymphocytes and follicular dendritic cells and belongs to the immunoglobulin (Ig) superfamily. CD19 regulates the development, proliferation and differentiation of B cells in a B cell receptor (BCR)-dependent and independent manner. CD19, together with CD21, CD81, and CD225, forms the BCR complex, which reduces the BCR-mediated B cell activation threshold. At present, the clinical methods of targeting CD19 in the treatment of malignant tumors are mainly chimeric antigen receptor T-cell (CAR-T) therapy and antibody-drug conjugates (ADCs). The 8 CD19 target drugs approved so far are all biological drugs. In addition, there are a total of 220 CD19-targeted drugs under development in the world, of which only 1 is a chemical drug, and the rest are biological drugs. More reading related CD19>>

CD79b, a B cell surface antigen, is an important part of BCR and is responsible for signal transduction after antigen binding. Since CD79b itself does not directly bind extracellular signals, the drug development of CD79b is mainly based on antibody-drug-conjugates (ADC). At present, three immunotherapy drugs targeting CD79b have been disclosed in the world. Polatuzumab vedotin, which was approved by the FDA in 2019, is the first CD79b-targeting antibody-conjugated drug (ADC) for the treatment of relapsed or refractory diffuse large B cells Lymphoma. Another ADC drug targeting CD79b, IIadatuzumab vedotin, also from Roche, is currently undergoing phase I trials for the treatment of non-Hodgkin lymphoma. In addition, another CD79b-targeting PRV-3279 is a bispecific antibody (CD32b×CD79b) for the treatment of systemic lupus erythematosus and is in clinical phase I. However, no domestic research on CD79B-targeted drugs has been reported.

CUSABIO has listed some popular targets related BCR signaling. Click on the corresponding target to view all the reagents related to the target.