Tumor necrosis factor (TNF) includes two cytokines, TNFα and TNFβ. TNFα is named for its ability to induce hemorrhagic necrosis in certain murine tumors and to be cytotoxic to certain tumor cell lines, also known as cachectin. It has a variety of biological functions, such as causing hemorrhage and necrosis of tumor tissue, anti-virus, promoting cell proliferation and differentiation, etc. It plays an important regulatory role in inflammation, immune response and various pathophysiological processes. TNFβ is an analog of TNFα produced by activated T cells and is a cytokine with important biological activities (More information about TNF>>). All biological functions of TNFα are mediated through the receptors of TNFα on the cell membrane surface, namely TNF receptors. TNFα receptors are TNFRI and TNFRII. What are the structures of TNFRI and TNFRII? interact with the two?

Both TNFRI and TNFRI have a typical structure of type I membrane protein, and both consist of four parts, including a hydrophobic signal peptide, a cysteine-rich extracellular domain, a transmembrane domain, and an intracellular domain. The two have 28% homology, and the homology is mainly in the cysteine-rich extracellular region, which contains four tandemly repeated cysteine-rich motifs. Neither receptor has tyrosine- or serine/threonine-specific protein kinase activity. TNFRI and TNFRI intracellular domain sequences are largely unrelated and have little homology to each other. Both extracellular domains contain a ligand-binding pre-assembly domain (PLAD), which, unlike the ligand-binding domain, is essential for the formation of functional receptor complexes before ligand-binding. The proximal C-terminus of TNFR1 contains a death domain (DD) of approximately 80aa in length, which is essential for the death-inducing activity of TNFR1. The difference in apparent molecular weight is mainly due to their different degrees of glycosylation.

TNF generally refers to TNFα, a cytokine with pleiotropic effects on various cell types that can trigger a range of various inflammatory molecules, including other cytokines and chemokines. It has been identified as a master regulator of inflammatory responses and is involved in some inflammatory and autoimmune diseases. TNF-α is a homotrimeric protein consisting of 157 amino acids, mainly produced by activated macrophages, T lymphocytes and natural killer cells. TNF-α exists in soluble and transmembrane forms. Transmembrane TNF-α (tmTNF-α) is the initial synthetic precursor form, which needs to be processed by TNF-α converting enzyme (TACE) and released in the form of soluble TNF-α (sTNF-α). The sTNF-α then acts by binding to the receptors TNFR1 and TNFR2 on the cell surface. tmTNF-α also acts on both TNFR1 and TNFR2, but its biological activity is mainly mediated by TNFR2. Binding of TNFα to TNFR1 and TNFR2 recruits signaling molecules, which in turn activate at least three different effector molecules. Through a complex signaling cascade, these effector molecules ultimately lead to the activation of caspases and two transcription factors, activator protein-1 and NF-KappaB. 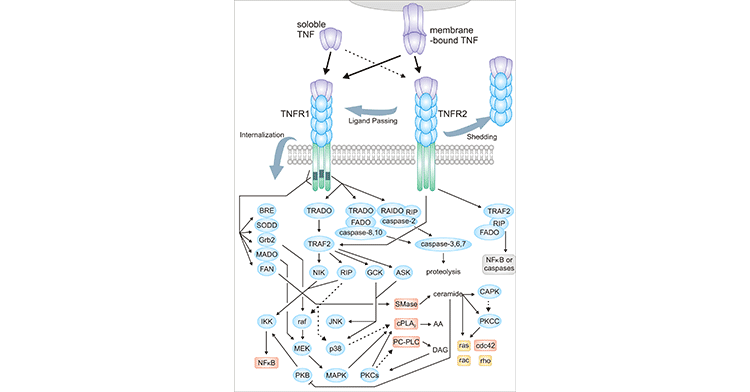 TNFR1 first binds to TRADD, and then, the complex recruits FADD, RAIDD, MADD, and RIP. Binding of TRADD and FADD to TNFR1 results in the recruitment, oligomerization and activation of Caspase 8. Activated Caspase 8 then initiates a proteolytic cascade including other caspases (eg, Caspase 3, 6, and 7) and ultimately induces apoptosis. In addition, Caspase 8 can also cleave BH3 interacting death domain (BID) to form truncated BID (tBID). tBID can disrupt the mitochondrial outer membrane, leading to the release of the pro-apoptotic factor cytochrome-C (CytoC). CytoC released from the intermembrane space binds to APAF1 (caspase activator 1), which can further recruit Caspase 9. And caspase 9 in turn activates Caspase 3 proteolytically. A novel 61 kDa protein kinase, RIP2, is associated with RIP, a TNFR1-mediated recruitment of the caspase death protease. Overexpression of RIP2 indicates NF-KappaB activation and cell death.

TNFR2 lacks a death domain, but TNFR2 still recruits adaptor proteins including TRAF2. TNFR2 is thought to be capable of signaling apoptosis, either directly or through a so-called "ligand delivery" mechanism. Because TNFR2 has a greater affinity and half-life for TNF binding and holds ligands, enhancing local TNF concentrations in the vicinity of TNFR1 receptors. These TNFR1 receptors accept TNF ligands from TNFR2 and become activated themselves and form signaling the apoptotic machinery of TNFR1. Furthermore, others have suggested that TNFR2 signals cell death through its cytoplasmic domain to induce mTNF expression and then signals apoptosis through TNFR1.

TNFR1 and TNFR2 are members of the TNF receptor superfamily. The members of this family currently plays a key role in many biological events. Twenty-nine TNF receptor family members have been identified in humans. Based on their cytoplasmic sequence and signaling properties, these TNF receptors can be divided into three types.

The characteristic of the first type of TNF receptors is the death domain (DD) in the cytoplasmic tail. Fas, DR4 and DR5 interact with Fas-associated death domain (FADD), whereas TNFR1 and DR3 interact with adapter TNFR-associated death domain (TRADD). These molecules in turn cause activation of the caspase cascade and induction of apoptosis. The second type of TNF receptors contains one or more TRAF interacting motifs (TIMs) in their cytoplasmic tails. Activation of TIMs leads to the recruitment of TRAF family members and activates multiple signal transduction pathways such as nuclear factor-Kappa B (NF-Kappa B), Jun N-terminal kinase (JNK), p38, cellular signal-regulated kinase (ERK) and phosphophospholipase 3 kinase (PI3K). A third type of TNF receptors, also known as decoy receptors, do not contain functional intracellular signaling domains or motifs. Although such receptors do not provide intracellular signal transduction, they act as receptors that can effectively compete with the other two signal transduction groups for their corresponding ligands, acting by preventing other TNF receptors from activating signal transduction pathways.

CUSABIO lists partial popular targets of TNF receptor superfamily. You can click to see all the related molecules/targets and research reagents of them.