1. The Structure of TCR

TCR is a heterodimeric membrane protein that belongs to the immunoglobulin superfamily. TCR includes two types of receptors, αβ chain receptors and γδ chain receptors, and about 95% of human peripheral blood T lymphocytes express αβ chain receptors. Most TCRs are composed of highly variable alpha subunits and beta subunits linked by disulfide bonds. This type of T cells is called αβ T cells. A minority containing both gamma and delta subunits are called γδ T cells. The extracellular portion of each chain consists of two domains. The overall structure is similar to that of the antigen-binding fragment (Fab) of an immunoglobulin (Ig). The TCR domains furthest from the membrane resemble the Ig variable (V) regions, while the TCR domains closest to the membrane resemble the Ig constant (C) regions. Antigen binding occurs at sites created by the V domains of the αβ or γδ chains. The three-dimensional (3-D) structure of the extracellular portion of the TCR has been determined, with great similarity to Ig. 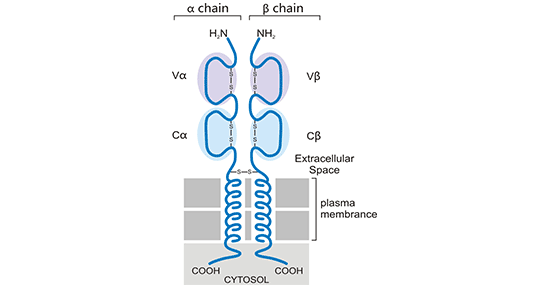 TCR recognizes antigens with specificity and diversity. The V region (Vα, Vβ) of TCR has three hypervariable regions, CDR1, CDR2, and CDR3. Among them, CDR3 has the largest variation, which directly determines the antigen-binding specificity of TCR. The diversity of TCRs is formed by the principles of gene mixed arrangement and combinatorial design. It is estimated that its total amount reaches as many as 1015-1018, which endows individuals with almost unlimited antigen recognition and response capabilities, ensuring that individuals can have an effective immune response to foreign antigens (pathogens) in a variable environment. At the same time, T cells also follow the principle of clonal selection, that is, when TCR binds to a cognate antigen, it will lead to the proliferation of T cells to form antigen-specific T cell clones.

Take the αβ chain TCR receptor as an example. TCR is composed of variable TCRαβ dimers. Because the cytoplasmic regions of the α chain and the β chain are very short, CD3 molecules are needed to transmit activation signals. CD3 consists of CD3γ, CD3δ, CD3ε and CD3ζ subunits. CD3 subunits all contain 1-3 conserved immunoreceptor tyrosine activation motifs (ITAMs) in the cytoplasmic region, and ITAMs are phosphorylated by Src family tyrosine kinases Lck and Fyn. Binding of TCRαβ to the MHC/antigen-peptide complex (pMHC) on the cell surface of APCs results in a biological change in the cytoplasmic portion of CD3, which is the key to TCR triggering. At present, there are three mainstream theories about the triggering mechanism of TCR. The first is aggregation, which is triggered by the physical aggregation of related molecules when TCR binds to the MHC/antigen peptide complex; the second is triggered by changes in molecular structure when combined; the third is dispersion and redistribution, the dispersion and redistribution of TCR-CD3 complexes and other cell membrane-related proteins caused by the binding of TCR to MHC/antigen peptide complexes. More information related TCR signaling pathway>>

The initiation and transmission of TCR signals are finely regulated, including positive and negative regulation. Once the balance is disrupted, it will affect the effect of immune responses or induce autoimmunity.

CUSABIO has listed some popular targets related TCR. Click on the corresponding target to view all the reagents related to the target.