NK cells, also known as natural killer cells, are an important type of lymphocytes in the body's innate immunity. The cells are large in size and contain large particles in the cytoplasm, similar to monocytes. It can directly kill target cells, and not only plays an important role in anti-virus, immune surveillance and anti-tumor, but also produces some cytokines (such as IFNγ), which play an important role in hematopoiesis, inflammation and immune response. NK cells can not only recognize and activate target cells lacking or mutated MHC class I molecules, but also recognize MHC class I molecules and inhibit their responses, so that the activation of NK cells is strictly controlled. 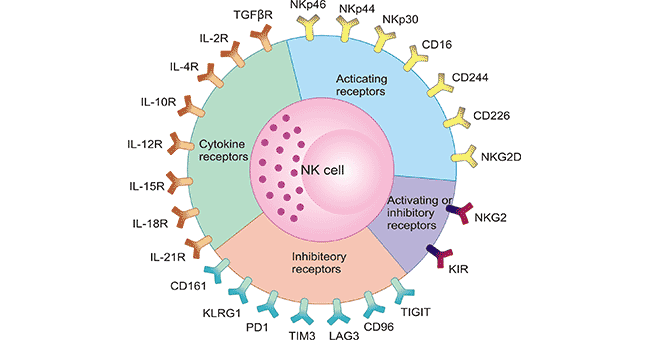 After NK cell inhibitory receptor (KIR) recognizes its own MHC-I molecules, it transduces killing inhibitory signals and inhibits its own killing function. There are many types of KIRs, and according to their structural characteristics, they can be divided into two categories: immunoglobulin superfamily (IgSF) and C-type lectin family. The common feature of these two types of receptors is the inclusion of an immunoreceptor tyrosine inhibitory motif (ITIM) in the cytoplasm. After KIR binds to the corresponding ligand, it can transmit inhibitory signals through ITIM, thereby inhibiting the killing activity of NK cells to the corresponding target cells. However, for cells with missing or decreased expression of MHC class I molecules due to viral infection or canceration, as well as some allotype or xenogeneic MHC molecules, NK cells are in an activated state because inhibitory receptors cannot bind to them and cannot transmit inhibitory signals. Such receptors include CD161, CLRG1, PD1, TIM3, LAG3, CD96 and TIGIT.

After the NK cell activating receptor recognizes the carbohydrate ligand on the surface of the target cell, it transduces the activation signal into the cell, and plays a killing role to activate the receptor. These receptors mostly bind to non-MHC ligands, and can be also roughly divided into two families: IgSF and C-type lectin. The activating receptors of most NK cells initiate intracellular signal transduction by interacting with corresponding adaptor proteins containing one or more immunoreceptor tyrosine activation motifs (ITAMs). Such receptors include natural cytotoxicity receptors, consisting of NKp30, 44 and 46. NKp30 recognizes the B7-H6 tumor antigen, and NKp44 binds viral hemagglutinin and hemagglutinin neuraminidase as well as other tumor-associated ligands. NKp 46 inhibits metastatic tumor growth in mice. Fcγ-RIIIa (CD16) is another activating receptor that triggers antibody-dependent cytotoxicity (ADCC).

CUSABIO has listed some popular targets related NK cell receptor. Click on the corresponding target to view all the reagents related to the target.