Granulocytes are developed from the granulocyte lineage of hematopoietic stem cells, contain many granules in the cytoplasm, and are the most common type of white blood cells. Granulocytes migrate into the blood circulation after they mature in the bone marrow, and can escape from the blood vessel wall into tissues, sites of inflammation, exudates and body fluids. But granulocytes that leave the blood cannot be recirculated. Granulocytes can be divided into three cell types by Wright dye staining: neutrophils, eosinophils and basophils. The membrane proteins on the surface of different types of granulocytes are different, that is, granulocyte receptors. 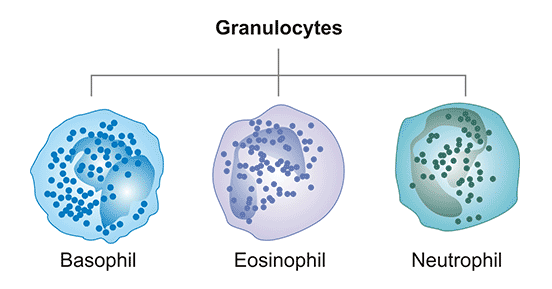 Neutrophil receptors refer to a series of membrane proteins expressed on the surface of neutrophils, including FcγR, partial chemokine receptors (IL-8R, etc.) and complement receptors (C5aR/C3bR/ C4bR, etc.), endows neutrophils with strong chemotactic and phagocytic abilities. By phagocytosing pathogens, neutrophil kills human-invading microorganisms in various ways such as intracellular particles (myeloperoxidase, acid phosphatase, lysozyme, alkaline lysozyme and defensins, etc.) and the formation of extracellular traps. At the same time, neutrophil can also release a variety of inflammatory mediators such as leukotrienes whistling eosinophil chemokine, prokininase and cause inflammatory response [1].

In Wright's stained blood smears, the cytoplasm of neutrophils was colorless or very light reddish, and there were many scattered small reddish or light purple characteristic granules. It is estimated that humans and mice generate 1011 and 107 neutrophils per day, respectively, and the time from the last myeloid cell division to release into the circulation is 6-7 days and 3 days, respectively. Neutrophils enter tissues from the circulatory system, play an important role in host defense, have effector functions to protect the body's innate and adaptive immunity, and are the first responders to inflammation and infection [2] [3].

Eosinophils receptors refer to a series of membrane proteins expressed on the surface of eosinophils, such as receptors for immunoglobulin Fc fragments and complement C3. Such receptors produce specific immunoglobulin IgE in animals already immune to a certain helminth. After worms are opsonized by specific IgE and C3, eosinophils can adhere to worms by means of Fc receptors and C3 receptors expressed by cells, and use enzymes such as peroxidase contained in cell lysosomes. Injury-like worms. In addition, eosinophil granules contain specific toxic proteins and cathepsins that play an important role in killing parasites such as parasitic nematodes.

Basophil receptors refer to a series of membrane proteins expressed on the surface of basophils, such as IgE receptors FcεRI, CD49b, c-kit, and immune molecules related to innate immunity. Immune molecules related to innate immunity on the surface of basophils include pattern recognition receptors such as Toll-like receptors, complement receptors, and protease-activated receptors. These receptors bind to corresponding ligands, and subsequently release Th2 cytokines such as IL-4 and IL-13, chemokines, etc., to initiate allergen-specific Th2 immune responses and participate in immune regulation. IL-4 and IL-13 are involved in allergic diseases and inflammatory processes, and play an important defense role in innate and adaptive immunity. Therefore, basophils not only participate in acute and chronic inflammatory response and anti-parasitic immunity, but also participate in the regulation of innate immunity and acquired immunity.

CUSABIO has listed some popular targets related granulocyte receptor. Click on the corresponding target to view all the reagents related to the target.