MAPK is a mitogen-activated protein kinase, a class of protein kinases with dual phosphorylation of serine and tyrosine in the cytosol. The MAPK signaling pathway activates transcription factors and regulates gene expression through a cascade reaction (MAPKKK-MAPKK-MAPK). MAPK can cause the activation of transcription factors in the nucleus, participate in the process of signal transmission from the cell surface to the nucleus, and regulate cell proliferation and differentiation. In the MAPK signaling pathway, the ERK pathway acts primarily through the Ras-Raf-MEK-ERK cascade.

The main process of this pathway: the growth factor activates the receptor by binding to the tyrosine kinase receptor, and the activated tyrosine kinase receptor activates the Ras protein, then the Ras protein phosphorylates the Raf, and the activated Raf phosphorylates the downstream MEK. MEK can phosphorylate and activate ERK, which is transferred into the nucleus and regulates gene expression by activating other kinases or transcription factors.

The p38 signaling pathway is an important component of the MAPK family. p38 MAPK can be activated by a variety of extracellular stress responses, including ultraviolet, radiation and proinflammatory factors.

The p38 signaling pathway regulates the differentiation direction of stem cells, which may be related to the regulation of the stability of p53 protein [3] [4].

In addition, the ERK5/BMK1 pathway, an atypical MAPK pathway, is involved in the regulation of adipocyte differentiation and fat metabolism.

The MAPK signaling pathway regulates cell differentiation through the participation of different pathways and different molecules. 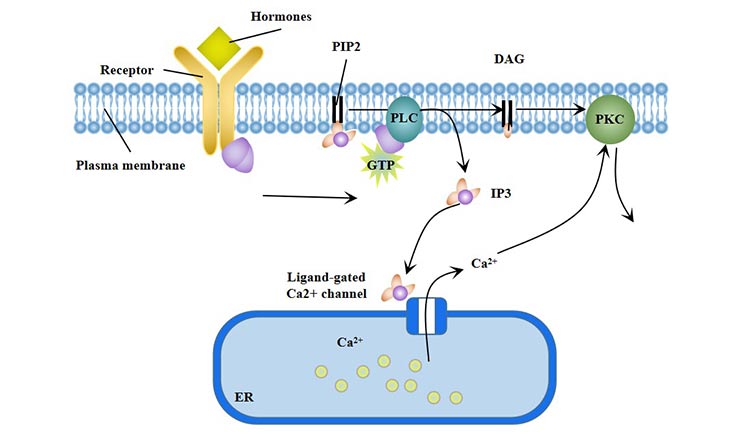 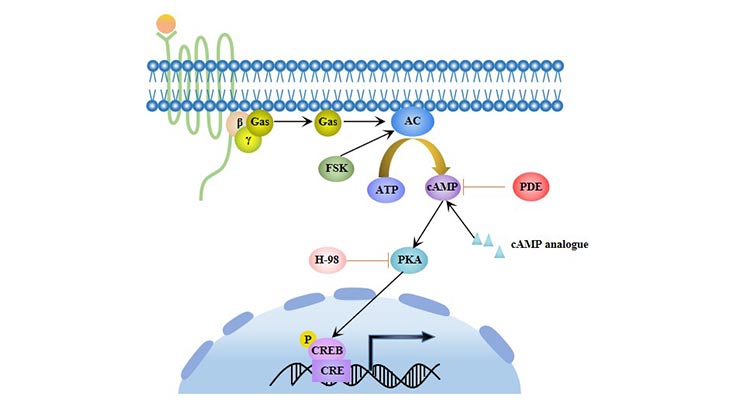 JAK is a tyrosine kinase whose major substrate is the transcription factor STAT. The activated STAT translocates to the nucleus and binds to the DNA sequence, thereby regulating gene expression. The JAK-STAT pathway plays an important role in cell proliferation, apoptosis and differentiation.

The main process of this signal pathway is as follows:

Ligand binding to the receptor leads to the dimerization of the receptor. Dimerized receptors activate JAK, JAK phosphorylation STAT. Phosphorylated STAT forms dimers that enter the nucleus and bind to DNA sequences to regulate gene expression.

The JAK/STAT pathway plays an important role in the proliferation and differentiation of red blood cells [6]. Studies have shown that PI3K-activated Akt kinase plays an important role in hematopoiesis. The PI3K pathway is also important in the regeneration of small intestinal stem cells and in promoting cell differentiation. In the Notch signaling pathway, the ligand binds to the Notch receptor and causes a series of signal transduction reactions in the cell, which ultimately leads to differentiated cells or remains undifferentiated. Notch ligands include Delta-1ike (Delta-1ike1, 3, 4) and Jagged (Jagged 1, 2).

In stem cells, Notch receptors are mainly distributed on the surface of stem cells. Notch pathway regulates stem cell differentiation and proliferation and plays an important role in organ development [7]. Notch signal can regulate the immune function of the body by regulating the differentiation and function of CD4+T cells, and plays an important role in maintaining the immune balance of the body and the development of various diseases [9]. 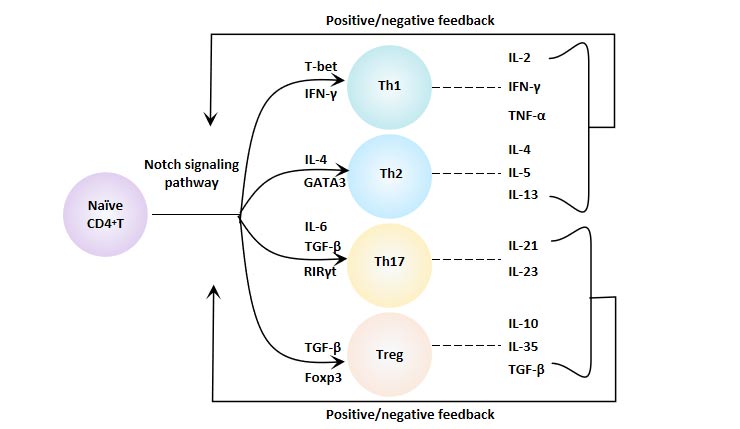 The high expression of GATA-3 in T cells is closely related to the polarization of Th2 cells. The Notch ligand Jagged-1 expressed by immature dendritic cells can directly promote the transcription of GATA3 and induce the polarization of CD4+ T cells to Th2 [12]. Jagged-2 can drive the differentiation of Th2 cells in vitro, however, Th2 is not affected by Jagged-2 in vivo [13]. The Notch signaling molecule can promote the differentiation of Th2 cells through the IL-4 and the GATA3, respectively.

RORγt is a Th17 cell-specific transcription factor. IL-17 and RORγt are direct transcriptional targets of the Notch signal. Jagged-1-Notch signaling can inhibit the expression of cytokines related to Th17 production, such as RORγt, IL-17A, IL-17F, thereby inhibiting the differentiation of CD4+ T cells into Th17 cells.

In general, Notch negatively regulates Th17 cell differentiation.However, when the body has a high metabolic demand, Notch can accelerate the release of Th17 cytokines by affecting the intracellular cytokine transport, so as to offset the original effect. Therefore, it is believed that Notch signaling plays an environment-dependent role [14].

The characteristic transcription factor of regulatory T cells (Treg) is Foxp3. The Notch signal regulates the expression of Foxp3 at the transcriptional level and regulates the induction of Treg cells by SCs. The study suggests that the Notch/RBP-J/FOXP3/RORγt pathway regulates the balance of Th17/Treg [15].

Neural stem cells (NSCs) are capable of self-renewal and multidirectional differentiation, and can differentiate into neurons, astrocytes and oligodendrocytes. Its proliferation and differentiation are regulated by Notch signaling pathway [16].

When the Wnt signal is not activated, the intracellular β-catenin is phosphorylated and degraded by the proteasome.

When the Wnt protein binds to its receptor Frizzled and LRP, the β-catenin degradation complex is inactivated, β-catenin is released and accumulates in the cell. The accumulated β-catenin enters the nucleus and binds to transcription factor and T cell factor/lymphocyte enhancer factor (TCF/LEF) to initiate a series of genes related to proliferation.

Activation of Wnt signaling pathway can inhibit the differentiation of fat cells [17], and once this pathway is out of control, obesity can occur [18].

[19] Gustafson B, Smith U. Cytokines Promote Wnt Signaling and Inflammation and Impair the Normal Differentiation and Lipid Accumulation in 3T3-L1 Preadipocytes [J]. Journal of Biological Chemistry, 2006, 281(14): 9507-9516.