The Overview of Interleukin

Interleukin is a kind of cytokines, which plays a critical role in immunological regulation and homeostasis. It is originally discovered from leukocytes. Currently, it is found to be produced by a lot of cells including macrophages, lymphocytic cells with a solid structure and function. In this article, we introduce interleukin briefly from the following aspects, involving family and receptor, signaling pathways, function and that role in inflammation.

The members of interleukin are wealthy which are named IL-1~IL-38.

There are 11 members in this family. They (IL-1, 18, 33, 36, 37, 38) binds to IL1, 18 primary receptors. IL-1α, IL-1β, IL-18, IL-33, IL-36α, IL-36β, IL-36γ triggers MPKK and NF-κB leading to inflammatory response. While other members of IL-1 family have anti-inflammatory effects. IL-1 is one hallmark cytokine in this family which can excrete as co-stimulation of T helper cells, maturation and proliferation of B cells, activation of NK cells and is relation to inflammation. IL-10 is an important anti-inflammatory cytokine which is produced by activated T cells, B cells, macrophages and monocytes. It involves in cytokine production of macrophages, activation of B cells, stimulated Th2 cells, meanwhile, it inhibits cytokine production of Th1 cells. It can form a homodimer that binds to the tetrameric heterodimer IL-10 receptor and inhibit the IL-1, IL-6 and TNF signaling pathway. It is related with non-small cell lung cancers. There are 4 members in this family. It (IL-12, 25, 27, 35) belonging to IL-6 superfamily is a special family as it is formed by heterodimers. It mediates phosphorylation of SAT1, 3, 4 by the JAK/STAT family. IL-12 involves in the stimulation and maintenance of Th1 cellular immune responses, including the normal host defend against various intracellular pathogens. 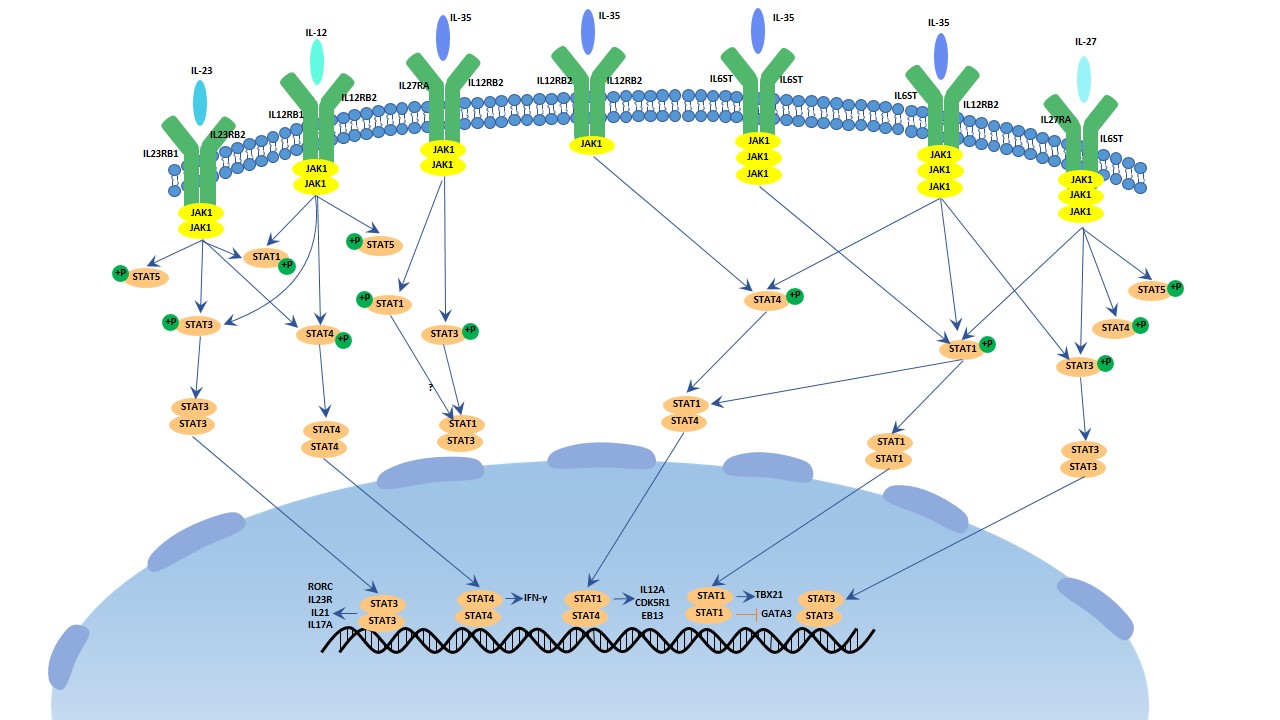 There are 6 members in the IL-17 family, and 5 members in its receptor family. It plays critical roles in host immunology. IL-17A is the hallmark in this family that it protects the host against extracellular pathogens, but also promotes inflammatory pathology in autoimmune disease, similar to IL-17C. While IL-17F involves in the mucosal host defense, IL-17E amplifies the Th2 immune response. The IL-17 family activates antibacterial cytokines and chemokines in MAPK, NF-κB and C/EBPs pathway. Act1 is considered as the master mediator in this pathway. IL-7 is a kind of glycoprotein which is produced by bone marrows and weighs 25 kDa. It is important for the immunological development, but the mechanism is not clear. A recent research showed that: IL-7 downregulates the Scos3 (the inhibitor of cytokine signaling), thus much cytokines are stimulated and the T cells effectors are increased resulting the clearance of virus[1]. The article conducted by Marc Pellegrini is published in Cell in 2011.

IL-7 can increase the T effector numbers such as CD4 T cells, CD8 T cells, naive T cells and B cells, and then infiltrate organs like liver, kidney and brain. According to the assay in this research, it is T cells rather than B cells to exert the function of virus clearance. This result is consistent with the previous result that B cells contribute just a little to modulate T cells’ response. It also enlightens us to receive IL-7 therapy.

IL-7's function depends on IL-6, meanwhile IL-7 augments many pro-inflammatory factors, particularly IL-17, IL-6 and IFNγ. But it limits the liver injury and cytotoxicity as it increases the IL-22, a cyto-protective cytokine.

Socs3 is one prominent repressor of IL-6 signaling pathway while IL-6 is increased with IL-7 treatment. It seems to be produced by T cells, and it is interfered by IL-7. Mice with socs3 deficiency can mimic the effect of virus elimination.

Interleukin is important for transmitting information, activating and regulating immune cells, mediates the activation, proliferation and differentiation of T cells and B cells.

Interleukin-1 contains IL-1α and IL-1β. While the former is produced by diverse cells, the later one is produced by some specific tissues. IL-1β is cleaved by caspase-1 which is formed by proteins termed as "the inflammasome". It can lead to pain and short-time sleep, so that they study the relationship between fatigue and IL-1[2]. IL-1 also can simulate the nitric oxides, chemokines, cytokines and adhesion molecules that destroy the cartilage, while the IL-1 receptor antagonist can inhibit the destruction of IL-1 through the completion of the same receptor. The study helps us to understand the pathology of these diseases[3].

Interleukin-2 is popular object in the past 36 years as it is important for the immunotherapy of many diseases including cancers. But the adverse of taking it is fearful[4].Thus, timing of IL-2 administration and different T cells status are crucial to IL-2 therapies[5].

Interleukin-10 is an anti-inflammatory cytokine. In the meanwhile, IL-10 suppresses the immune responses by modulating the T cells and antigen-presenting cells. By controlling the receptor of IL-10, we can resolve the chronic viral infection[6]. The research was published in The Journal of Experimental Medicine in 2006.

Interleukin-18 is a regulator of cancer and autoimmune diseases. As a member of IL-1 family, it plays essential roles in inflammation process. It can cooperate with IL-12 to activate cytotoxic T cells (CTLs) and natural killer (NK) cells to produce IFNγ which may contribute to tumor immune. In addition, it can work with IL-23 to induce the secretion of IL-17. It has pros and cons effects in the treatment of many diseases[7].

Inflammation is a productive conduct to stimuli such as pathogens and damage cells. Its characters are heat, redness, swelling, pain and loss of function, sometimes accompanied with fever. Inflammasome activation leads to activation of caspase-1, resulting in the induction of apoptosis and the secretion of pro-inflammatory cytokines including IL-1β and IL-18[8]. Without inflammation, we can’t prevent harm from stimuli, but it can lead to chronic infection such as rheumatoid arthritis. Inflammation plays a key role in chronic inflammatory systemic diseases (CISD). There are overlaps between different CISD.

Psoriasis is a common, infammatory and chronic disease with the character of erythematous, scaly plaques. It is related to cardiovascular disease (CVD) such as artherosclerosis. As a result of immune dysregulation, its pathology refers to infammatory cytokines like tumor necrosis factor (TNF), interferon (IFN) and IL-1β, IL-6, IL-12, IL-17, IL-22, IL-23 produced from dendritic cells, T-helper cells and keratinocytes. Patients with psoriasis have more Th17 cells and higher level of IL-17A mRNA and protein. The recent study demonstrates over-expressing IL-17 causing increased inflammatory cells and levels of nitric oxide synthase (iNOS), cyclooxygenase-2 (COX-2), nitric oxide (NO) makes more severe psoriasis, and endothelial dysfunction. In the contrast, blocking of IL-7 or the genes acting downstream of IL7 improves the severity of psoriasis[8][9].

Rheumatoid arthritis (RA) is a severe autoimmune disease accompanied with cartilage degradation, joint destruction and poor prognosis [8]. The study indicates that the polymorphism of inflammation genes leads to the susceptibility of RA[10][11][12]. Caspase-1 is a critical factor of RA, we can observe the reduction of RA in the caspase-1-/- mice mode[13]. Another member is NLRP1 which is related to the secretion of IL-1β and IL-18. Inhibiting the NLRP1 can ameliorate the symptom of RA[14].

This coordination starts with the homeostatic prepositioning of innate immune cells throughout the periphery, where they act as local sensors of infection and inflammation through the activation of pattern recognition receptors (PRRs), the inflammasome, and/or RNA and DNA sensors. Neutrophils, monocytes, and basophils, almost all innate immune cells are present to some extent in the periphery under homeostatic conditions. There they lie in wait as sensors of pathogen invasion, via PRRs, or tissue damage, via the interleukin (IL)-33 pathway as one example. MCs and macrophages are classically described as essential immune sensors, based on their expression of a wide variety of PRRs and their broad localization throughout all vascularized tissues. MCs are uniquely capable of responding immediately to infectious or inflammatory stimuli. Lipopolysaccharide (LPS) stimulation of murine peritoneal MCs leads to immediate release of CXCL1 and CXCL2-containing granules, but not histamine-containing granules, as well as transcriptional activation of CXCL1 and CXCL2[13].

Systemic lupus erythematosus (SLE), accompanied with inflammatory joints, nephritis, mouth ulcer, swollen lymph nodes and butterfly-shaped red rash on the face, is a rare inflammatory rheumatic disease that attacks normal healthy tissues in the body. The major representation is lupus nephritis (LN) with severe kidney destruction. The study explains the relationship between the expression of inflammasome and LN[15] Tsai et al. reported inhibiting the expression of mRNA and production of IL-1β, IL-18, caspase-1 relieves the symptom of LN[16]. Ka et al. further reported that a main active ingredient in the herbal medicine Litsea cubeca, significantly inhibited activation of NLRP3 inflammasome and caspase-1 and the secretion of IL-1. Moreover, it effectively ameliorated LN symptoms in accelerated and severe LN mice[17].

Crohn’s disease (CD) is a chronic inflammatory condition of the GI tract with no known cure. It is demonstrated efficient to take antibody-based therapies directed against TNF or interleukin-12/interleukin-23 p40 subunit antibody or integrins in moderate-to-severe CD. However, many patients experience primary non-response or lose response over time to anti-TNF therapy, so that we require dose adjustment, or switch to a non-anti-TNF therapy. Interleukin-6 has multiple pro-inflammatory effects such as inhibition of apoptosis in T-cells and is a target for curing CD. A recent study of the IL-6 receptor inhibitor, tocilizumab, manifests a clinical benefit in moderate-to-severe CD[18].

Click here to view our products about related Interleukin proteins