Today, progress is widely being made in targeted cancer therapy. Most current drug targets are G-protein coupled receptors, nuclear receptors, ion channels or enzymes. Nevertheless, up to 80% of proteins remain “undruggable” meaning that small molecule drugs are unable to target given proteins to produce desirable effects. Substantial and significant efforts have been made among scientists to improve the small molecule drugs.

Now, a "revolutionary" targeting strategy has emerged - PROTAC, Proteolysis Targeting Chimera. PROTAC technology can degrade target proteins regardless of their function, making it possible to degrade non-druggable proteins, expanding the range of proteins being targeted for drug discovery. Looking further back, in March 2019, PROTAC entered clinical trials for the first time. Amazingly, within a few years, over 200 targeted protein degraders are currently in the different clinical-trial stages, in which are mainly PROTAC molecules. To learn how PROTAC can advance drug discovery research, we herein provide a detail summary on PROTAC technology and its perspectives in future.

2. What is PROTAC Technology?

3. Applications of PROTACs in Cancer Treatment

4. The Clinical Perspectives of PROTACs

Proteolysis targeting chimeras (PROTAC) is a novel technology for targeted protein degradation. In 2001, Professors Craig Crews and Raymond Deshaies described the PROTAC idea and reported the first PROTAC molecule PROTAC-1, which was designed to target the methionyl aminopeptidase-2 (METAP2), as a pioneering new technology [1]. In 2008, Crews' team used Nutlin recruitment MDM2 to initiate a degradation cascade for targeting the androgen receptor (AR). This small molecule recruits the AR to the vicinity of MDM2, ubiquitinating it and subsequently degrading it by the proteasome complex [2]. This chimeric molecule, capable of targeting the protein for degradation, is named PROTAC (Proteolysis Targeting Chimera) (Figure 1) [3].

Nowadays, PROTAC has gained the attention of many cancer drug developers. Different PROTAC molecules have been developed for targeted protein reduction as an alternative approach to cancer therapy. PROTAC can inactivate cancer cells by inducing the target protein into the protein degradation system without necessarily binding to the active site of the target protein. At the same time, it can overcome the drug resistance problems of traditional small molecules. To date, many companies are involved in PROTAC R&D, which is favored by research institutes, pharmaceutical companies, and investment institutions. 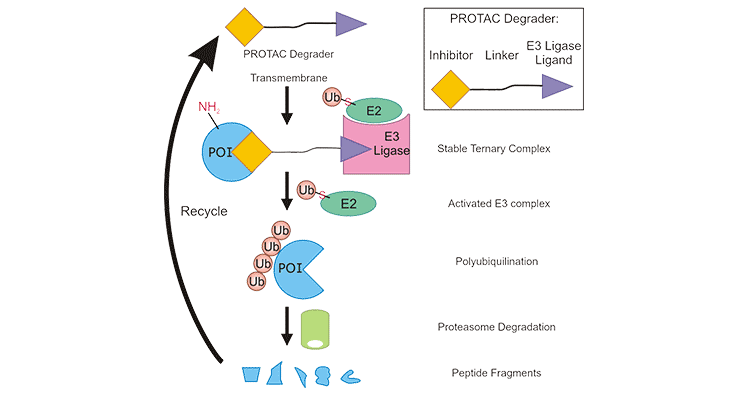 2. What is PROTAC Technology?

The Ubiquitin Proteasome System (UPS), or ubiquitin-mediated protein degradation system, is the pathway taken by PROTAC to degrade proteins [4]. The UPS is also the main pathway in the degradation of more than 80% of intracellular proteins, which is to degrade proteins that are damaged or no longer needed in the cell. In general, abnormalities in degradation often lead to diseases such as tumors [5, 6]. Which is to say, ubiquitin molecules act on a series of enzymes to sort intracellular proteins, from which target protein molecules are selected and specifically modified to form target protein polyubiquitin chains. Then the polyubiquitin chains direct the degradation of substrates at the proteasome. In the UPS process, the related enzymes mainly include E1 activating enzymes, E2 conjugating enzymes, and E3 ubiquitin ligases.

Specifically, the ubiquitin-proteasome system degrades proteins in a four-stage pathway (Figure 2): (i) E1, ubiquitin activation, under the energy supply of adenosine-triphosphate (ATP), the C-glycine residue of ubiquitin (Ub) forms a high energy thioester bond with the cysteine residue of E1; (ii) E1 connects the activated Ub to E2 through the intermediate product of Ub adenylation to form the E2-Ub sulfhydryl ester; (iii) E3, a key element in UPS pathway, which is needed to identify specific substrates; (iv) polyubiquitin (polyUb) chain is recognized and degraded by proteasome [7]. 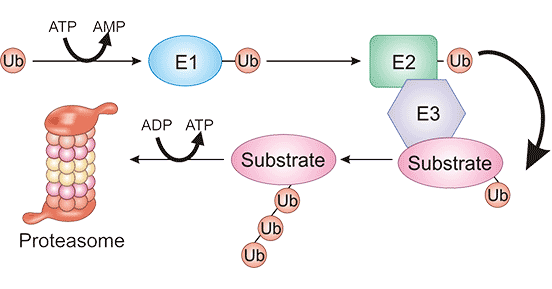 Figure 2. The pathway of protein degradation via the "ubiquitin-proteasome system" [7]

2.2 The Characteristics and Mechanism of PROTACs 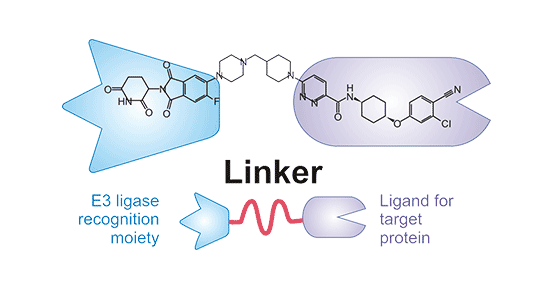 Figure 3. The Structure of PROTACs [7]

To date, more than 600 human genomes encoded E3 ligases have been identified. Several E3 ubiquitin ligases applied to the design of PROTAC molecules have been revealed, including CRBN, apoptotic protein inhibitor VHL, apoptosis protein inhibitory proteins (IAPs), MDM2 and DCAF16 etc. However, most of the clinical PROTAC pipeline disclosed E3 degrading enzymes are CRBN. Other studies suggest that KLHL41 expressed in skeletal muscle, RNF182 and TRIM9 expressed in the nervous system, and CDC20, CIAO1, WD82 expressed in tumors may be used for PROTAC molecular design, which will further enrich the properties of PROTAC [9-10]. 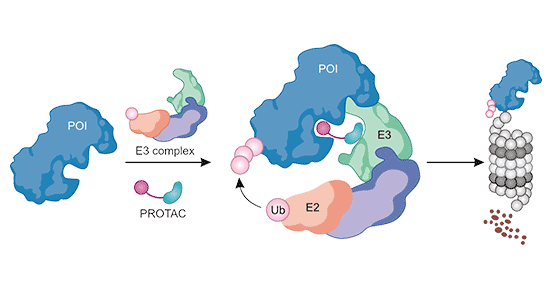 3. Applications of PROTACs in Cancer Treatment

Prostate cancer is a very common cancer in men. The androgen receptor (AR) is the key indicator for the diagnosis of this disease. AR antagonists such as Enzalutamide have been used with significant efficacy in the treatment of prostate cancer patients, but resistance often occurs. PROTAC against AR has been repeatedly shown to be superior to Enzalutamide, particularly in cases with mutant-driven conversion of antiandrogen from AR antagonist to AR agonist [13]. Currently, several PROTACs for AR are in clinical trials for the therapy of drug-resistant prostate cancer.

In addition to ER, there are a number of targets associated with breast cancer, such as CDK4/6, HER2, and PARP1, and TACC3, BET family proteins (BRD2, BRD3, BRD4 and BRDT), etc. Researchers have designed and synthesized the corresponding PROTAC molecules, which have degradation effects on target proteins at the cellular level [15-17]. These studies suggest that PROTAC-targeted protein degradation is expected to provide a new strategy for the treatment of breast cancer.

EGFR, a receptor tyrosine kinase (RTK), is closely related to the regulation of apoptosis, proliferation, metabolism, and survival. EGFR is mutated in 10%-15% of NSCLC patients, and EGFR inhibitors are a hot spot for drug development. However, many patients develop drug resistance, which affects the subsequent treatment effect. Currently, many research teams are also conducting research on targeted degradation of EGFR using PROTAC technology [18]. In addition, as a new target for the treatment of NSCLC, KRAS plays an important role in cell survival and cycle progression. In 2020, Crews' team reported the first PROTAC molecule that degrades KRAS G12C, an important breakthrough in the field of PROTAC technology targeting non-druggable proteins. Moreover, about 4% of NSCLC is accompanied by ALK fusion genes, ALK targeting PROTAC is expected to find a new direction for patients with ALK-resistant mutations [19, 20].

The advent of BCR-ABL kinase inhibitors has transformed the lives of patients with chronic granulocytic leukemia (CML); however, kinase inhibition does not provide complete cure in most patients. The development of PROTAC, which induces BCR-ABL degradation, has been reported to exhibit significant selectivity and significantly inhibit the growth of BCR-ABL+leukemic cells, thereby inhibiting the BCR-ABL-mediated signaling pathway [21]. Now, more novel PROTAC target protein degraders for CML are in the clinical stage.

In addition to targeting degradation of key proteins in tumors, another challenging is aggregation-prone proteins. α-Synuclein/SNCA and tau proteins are closely associated with the pathogenesis and dysfunction of neurodegenerative diseases. Degradation of these proteins by direct recruitment of PROTAC to E3 ligases is a viable approach to treat this class of diseases as well as protein aggregation diseases. Indeed, several studies of PROTAC have been explored to treat Amosheimer's disease by inducing tau degradation [22-24].

4. The Clinical Perspectives of PROTACs

PROTAC technology is an emerging protein degradation technology. PROTAC boasts overwhelming superiority over small molecule inhibitors, such as targeting non-druggable targets and overcoming drug resistance. As researchers learn more about the UPS, PROTAC (eg., more identified protein target ligands and E3 ligase ligands), this will further accelerate the use of PROTAC in drug discovery. As of now, PROTAC has been intensively studied in the treatment of tumors, viral infections, and neurodegenerative diseases. A host of pharmaceutical companies puts more strategies on PROTACs to have successful clinical trials, including Roche, Biogen, GSK, Sanofi and others. It is believed that PROTAC molecular drugs will be a promising technology for cancer drug discovery (Table 1).

Targeting protein degradation with Proteolysis-Targeting Chimera (PROTAC) is the most popular technology in the current drug discovery. Here, CUSABIO summarizes popular target proteins and E3 ubiquitin ligases in PROTAC research to help you explore the functions of PROTAC for specific targets or its potential clinical value!

[21] Pan, You-lu, et al. "The progress of small-molecules and degraders against BCR-ABL for the treatment of CML." European Journal of Medicinal Chemistry (2022): 114442.