In 1978, the transforming factor of the first oncogene, Rous sarcoma virus (v-Src), was shown to be a protein kinase. In 1981, it was discovered that PKC could be activated by the tumor-promoting phorbol 12-myristate 13-acetate (PMA). These findings demonstrate the important role of protein phosphorylation in the pathogenesis of disease and open the door to drug development targeting protein kinases/phosphatases.

Herein will introduce the definition, types, function, and research of protein kinases.

1. What Are Protein Kinases?

2. What Are the Types of Protein Kinases?

3. What Are the functions of Protein Kinases?

4. How Are Protein Kinases Activated?


1. What Are Protein Kinases?

Protein kinases (PKs), belonging to the kinase family, are a kind of phosphotransferases responsible for the transfer of the γ-phosphate from ATP to the specific amino acid residues of the substrate proteins. This process is known as protein phosphorylation, which is a reversible and dynamic process regulated by the competitive activities of protein kinases and phosphatases. In eukaryotes, phosphorylation mainly occurs at the Ser and Thr residues of proteins, but also at Tyr residues.

Protein kinases share a similar three-dimensional catalytic domain. The catalytic domain consists of 250 to 300 amino acids composed of a larger, generally α-helical, C-terminal subdomain and a smaller, usually β-sheet, N-terminal subdomain [1][10]. The N-and C-terminus are linked by a peptide scaffold, forming a deep groove enables the binding of the peptide substrate and an ATP molecule. The ATP-binding region rotates into "on" and "off" conformations depending on ATP binding and the activation state of the enzyme [2]. Figure 1. The structure of protein kinase

This picture is cited from Wikipedia


In addition, protein kinases have non-catalytic domains that allow substrate attachment and recruitment of other signaling proteins.


2. What Are the Types of Protein Kinases? 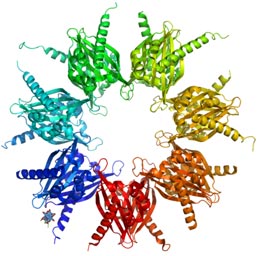 (an example of a serine/threonine-specific protein kinase)

CDKs play a central role in the cell cycle regulation network, and its main biological role is to regulate different phases of the cell cycle, from G1, S, G2 to M phase, and complete the cycle[3].

*The Table is from Wikipedia

Mitogen-activated protein kinases are catalytically inactive in their base form, they require phosphorylation activation. MAP kinase is regulated by a phosphorylation cascade. It is regulated by a three-level cascade consisting of MAP kinase, MAPK kinase and MAPKK kinase [4]. Each MAPK kinase, however, can be activated by more than one MAPKK kinase, increasing the complexity and diversity of MAPK signalling. Protein Kinase D: It belongs to a new class of Ser/Thr protein kinases that are activated by protein kinase C (PKC). PKD is involved in the regulation of cellular functions such as cell Golgi reverse membrane transport, cell growth, proliferation, migration, differentiation and apoptosis[5].

It involving transcriptional processes and regulation of the cell cycle.

Histidine protein kinase is a kinase that phosphorylates histidine in a substrate protein, mainly including:

Two-component histidine protein kinase, it can regulate the response to environmental stimuli.

The acyl group of the protein is the phosphorus receptor. Aspartic acid/glutamic acid-specific protein kinases can phosphorylate aspartate/glutamate.


3. What Are the functions of Protein Kinases?

Protein kinases are dynamically regulated to function as molecular swithes in the cell by phosphorylating target proteins. They form a criss-cross network in cell signaling transduction, cell metobolism regulation, and other essential cellular functions.

Protein phosphorylation by protein kinases is one of the most common and important post-translational modifications in eukaryotes. It plays an important role in various aspects of every organism, such as gene expression, cell proliferation, differentiation, apoptosis, signal transduction, immune regulation, metabolism, motility, membrane transport, tumorigenesis and so on.

Protein kinase regulate signal transduction mainly through two ways. One is to regulate protein activities through phosphorylation. The other is to amplify the signal through the stepwise phosphorylation of the protein thus causing cellular response to external stimuli.


4. How Are Protein Kinases Activated?

Abnormal expression of CDK can lead to digestive system tumors and[15] blood system tumors such as myelodys plastic syndrome (MDS) and acute myeloblasticleukemia (AML). In addition, abnormal expression of CDK is found in breast tumors[16], and other malignant tumors such as lung cancer[17], esophageal squamous cell carcinoma[18], such as malignant melanoma, liposarcoma[19], medulloblastoma[20], and prostate cancer.

Tyrosine kinase is also an important drug target because of its signaling role in cells[24]. Currently used anti-tumor PTK inhibitors are mainly pyrimidine compounds, protein peptide PTK inhibitors and terpenoids. In addition, thymidine kinase 1 (TK1) has been shown to be important in early detection of tumors, evaluation of efficacy, and prognosis.

[19] Hostein I, Pelmus M, Aurias A, et al. Evaluation of MDM2 and CDK4 amplification by real-time PCR on paraffin wax-embedded material: a potential tool for the diagnosis of atypical lipomatous tumours/well-differentiated liposarcomas [J]. Journal of Pathology, 2004, 202(1): 95-102.