Hepatocellular carcinoma (HCC) is the third most common death-related cancer in the world and the sixth most common tumor. The major risk factors for liver cancer include chronic viral hepatitis, alcoholism, carcinogens or genetic diseases. Advances in cancer biology have shown that HCC development is associated with changes in several important cellular signaling pathways. Targeting these pathways can help prevent, delay or even reverse tumor development, which is of great significance for the treatment of hepatocellular carcinoma.

The present situation is that most patients (approximately 80%) diagnosed with hepatocellular carcinoma are at advanced stage and cannot be surgically resected due to the absence of early HCC symptoms, coupled with a lack of awareness of screening and unclear definition of screening strategies [1] [2]. Sorafenib, a first-line systemic therapy for advanced HCC, is a multikinase inhibitor. As the first effective drug to target liver cancer, it significantly prolongs patient survival and progression time, but its overall survival benefit is limited [3]. The lack of effective treatment options is one of the main reasons for the high mortality of HCC patients, which highlights the need for new treatments. 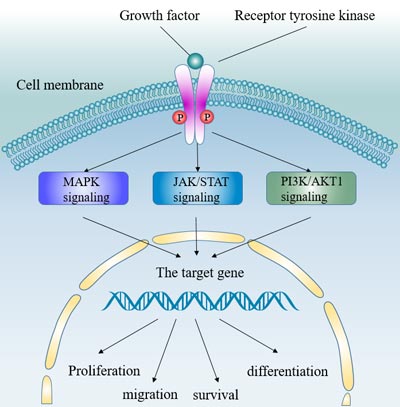 In hepatocellular carcinoma, many growth factors, including VEGF receptor, EGFR, IGF and HGF/c-MET, have significant effects on the occurrence and pathogenesis of tumors.

Tumor growth and invasion of liver cancer are dependent on angiogenesis disorders. VEGF is a key angiogenic factor. Therefore, VEGF plays an important regulatory role in liver cancer. Studies have shown that both VEGF and VEGFR expression are increased in HCC patients (including VEGFR-1, VEGFR-2, and VEGFR-3). Hepatitis b x antigen is associated with the up-regulation of VEGFR-3 [4]. VEGF expression is induced by hypoxic tumor environment (HIF-2), EGFR activation and COX-2 signaling [5] [6].

RAF/MEK/ERK pathway is a ubiquitous signal transduction pathway whose main role is to regulate cell proliferation, differentiation, angiogenesis and survival. Activation of this pathway contributes to tumor development, progression and metastasis.

The ERK/MAPK pathway is regulated by various growth factors, and the binding of growth factors leads to the phosphorylation of receptors and the activation of an adaptive molecular complex. This in turn activates the RAF/MEK/ERK pathway, triggering a series of specific phosphorylation events [5]. The intermediate signaling pathway is regulated by mitogen/extracellular protein kinases MEK1 and MEK2, which are responsible for phosphorylation of downstream signaling molecules ERK1 and ERK2. ERK1/2 regulates cellular activity through a variety of substrates that act on the cytoplasm and nucleus.

It is reported that RAF/MEK/ERK pathway also can be activated by HBV infection in HCC.

The role of RAF/ERK/MAPK pathway in tumorigenesis indicates that this pathway is also an effective therapeutic target for HCC.

Activation of the PI3K/AKT/mTOR signaling pathway is a major determinant of tumor cell growth and survival in multiple solid tumors. mTOR pathway plays an important role in the pathogenesis of liver cancer, with 15% ~ 41% of liver cancer patients suffering from mTOR pathway aberration.

mTORC1 and mTORC2 are important components in this signaling pathway. mTORC1 is a downstream signal of AKT, which activates S6 kinase to regulate protein synthesis and induces cell cycle progression from G1 phase to S phase [9].

In hepatocellular carcinoma, the overactive EGF and IGF signaling pathways are responsible for inducing the PI3K/AKT/mTOR pathway and promoting tumor progression. In addition, PTEN dysfunction is also the cause of excessive activation of PI3K/AKT/ mTOR pathway [10]. PTEN inhibits this pathway by reversing the PI3K response and blocking Akt activation. In hepatocellular carcinoma, PTEN gene expression is down-regulated, and its down-regulation is regulated by HBX protein. The interaction between GPC3 and FGF-2 is frequently observed in liver cancer cells and is responsible for phosphorylation of ERK and AKT [11].

There is also some evidence that the PI3K/AKT/mTOR signal may be activated by somatic mutations in the PI3K-catalyzed gene PIK3CA.

The PI3K/ AKT/mTOR pathway plays a key role in the pathogenesis of HCC. As a key role in mTOR signaling pathway, mTOR activity is often increased in HCC. Inhibition of mTOR activity can reduce cell proliferation in vitro and tumor growth in xenograft mouse models [12]. Blocking mTOR with everolimus slows tumor growth and improves survival. HSP90 is involved in the folding and activity of many oncoprotein proteins. Therefore, blocking HSP90 blocks the rapamycin-induced AKT signaling pathway, thereby enhancing the anti-tumor effect of mTOR inhibitor rapamycin [13]. 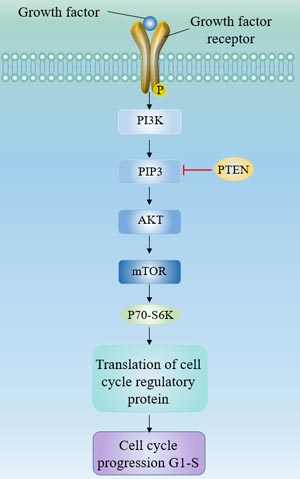 β-catenin in the Wnt signaling pathway is an important factor in the development of early and early carcinogenic events in HCC.

Wnt is a glycoprotein ligand that acts as a ligand for the Frizzled cell surface receptor family and activates a receptor-mediated signaling pathway [14].

In the absence of Wnt ligands, β-catenin binds to E-cadherin in most cells. Cytosol β-catenin forms complexes with adenomatous polyposis coli (APC) and AXIN1 or AXIN2, which mediates casein kinase 1 and glycogen synthase kinase 3b (GSK3b), resulting in continuous β-catenin Phosphorylation and degradation.

In the presence of Wnt ligand, extracellular Wnt ligand binds to the cell surface Frizzled family receptor, resulting in phosphorylation and inhibition of GSK3b, leading to accumulation of cytosolic β-catenin. Then β-catenin is translocated to the nucleus, interacts with TCF and LEF transcription factors, and activates transcription of target genes, including cyclin D1, c-Myc, c-MET, FGF4, metalloproteinases, and VEGF. Accumulation of β-catenin provides growth advantages for tumor cells by promoting proliferation and inhibiting differentiation.

In hepatocellular carcinoma, aberrant activation of the Wnt pathway is primarily a mutation in β-catenin. Studies have shown that treatment of HCC cell lines with TGF-β results in activation of β-catenin, suggesting that this pathway may also be mediated by TGF-β.

Cadherin 17 (CDH17) is an up-regulated adhesion molecule in HCC, which is related to tumorigenesis in various regions of the gastrointestinal tract [15]. Inhibition of CDH17 leads to the relocation of nuclear β-catenin to the cytoplasm, thereby weakening the Wnt/β-catentin signaling pathway [16]. Targeting CDH17 simultaneously inactivates the Wnt/β-catenin signal pathway.

The role of Wnt in the regulation of liver regeneration and the maintenance and self-renewal of pluripotent stem and progenitor cells suggests that it may be an ideal target for cancer therapy.

Different targeting targets can be proposed for the different activation of the Wnt channel:

Several drugs currently in clinical use have been shown to have anti-Wnt pathway activity. These drugs include non-selective cyclooxygenase (COX) [17], inhibitors indomethacin, sulinic acid, aspirin, and nitric oxide releasing aspirin, and selective inhibitors celecoxib and rofekoxib. The ubiquitin-labeled protein is degraded by the proteasome or absorbed by endocytosis and degraded in the lysosome. Ubiquitin-proteasome-mediated protein degradation is accomplished through a series of steps including ubiquitin-activating enzyme (E1), polyubiquitin-coupled enzyme (E2s), and ubiquitin ligase (E3s).

A variety of cancer-associated proteins are regulated by the ubiquitin-proteasome system, including:

Some cancer-related proteins are also involved in the ubiquitin conjugation mechanism: FRA6E fragile locus protein Parkin, an E3 ligase targeting cyclin E and P38, have been shown to act as tumor suppressors in HCC.

Hedgehog (Hh) signaling pathway is a highly conserved system that plays a crucial role in tissue pattern, cell differentiation and proliferation [20]. Abnormal activation of Hh signaling pathway leads to the occurrence and development of tumorigenesis in pancreas, colon, stomach [21], lung [22], prostate [23], breast, skin and other cancers.

Recent studies have shown that the Hh pathway is abnormally activated in human HCC. GPC3 interacts with the hedgehog signaling pathway in regulating developmental growth [24]. And the GPC3-hedgehog signaling pathway is thought to contribute to the development of HCC. The Hh pathway plays an important role in the development and invasion of HCC. Blocking the Hh signaling pathway may be a potential target for new HCC treatment strategies [25]. Downregulation of Gli2 with a ligand blocking antibody or KAAD-cyclopamine (selective Smo antagonist) or inhibition of this pathway has been shown to delay tumor growth and reduce tumor size.

Ras and Jak/Stat pathways are generally activated in HCC, and Ras pathway is the main signal network promoting cell proliferation and survival. The binding of different growth factors (eg EGF and IGF-1) to the receptor (eg EGFR, IGF-1R) induces the activation of Ras, which in turn activates c-RAF, MEK and ERK.

Ras and Jak/Stat inhibitors and demethylating agents can be used as a treatment for human liver cancer.