The yellow fever virus originated in Africa and circulated between Aedes aegypti mosquito and monkeys in the rain forests of Africa for thousands of years [1]. It is a potential deadly mosquito-borne flavivirus, which can be transmitted to humans through the bites of certain Aedes or Haemagogus species of mosquitoes. Today, yellow fever is on the rise. In 2013 the World Health Organization reported 127,000 severe cases and 45,000 deaths. It is estimated that 90% of yellow fever infections occur in Africa, with large portions of South America also considered at risk.

Read on to learn more about YFV, including structure, the important proteins, infection mechanisms, infection symptoms, transmission, diagnosis and treatment.

The Structure and Important Proteins

Mature YFV virion is an icosahedral particle about 40 nm in diameter. Like other flaviviruses, YFV contains a small glycoprotein-containing lipid envelope surrounding a nucleocapsid which encloses one viral RNA. The envelope of virus is inlaid with two virally encoded proteins: envelope (E) protein and membrane (M) protein. The E glycoprotein is the major component of the virion surface and is responsible for the receptor-mediated endocytic fusion and subsequent cell entry, as well as direct viral assembly ＆ budding, and immunogenicity. 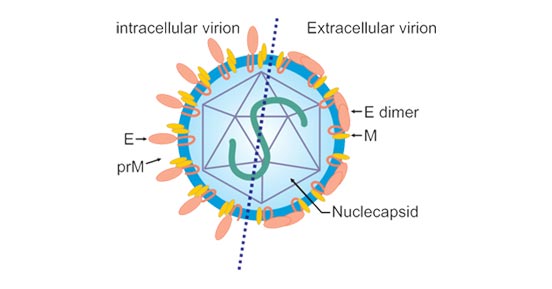 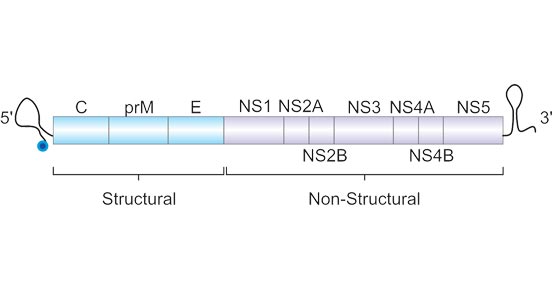 Yellow fever (YF) is an acute viral haemorrhagic disease caused by yellow fever virus infection and is identical to other viral hemorrhagic fevers (VHFs) in characteristics, such as Dengue hemorrhagic fever, Lassa fever, and Crimean-Congo hemorrhagic fever. This disease is endemic to tropical regions of Africa and the Americas because these areas are hospitable to the Aedes aegypti mosquito. The "yellow" in the name corresponds to jaundice, which afflicts some patients.

The clinical manifestations of yellow fever vary greatly, and the typical clinical process can be divided into the following four phases:

The first recorded yellow fever epidemic occurred in the Yucatan Peninsula of Mexico in 1648 [1]. For the next 200 years, yellow fever was widely epidemic in tropical America, the North American coastal cities, and Europe [2]. Since YF vaccine was developed and mass vaccination coverage was carried out, the number of infected cases were dramatically declined. Recently, there have been deadly outbreaks of YFV disease in Angola (2016), the Democratic Republic of the Congo (DRC) (2016), and Brazil (2017) [3].

If yellow fever virus is introduced into an immunodeficient population with human blood loving vectors, coupled with the absence of clear management guidelines and appropriate precautions, there is a great possibility of yellow fever outbreak in this area.

The yellow fever virus is mainly transmitted to people through the bite of infected Aedes or haemoarchaea mosquitoes [4]. Mosquitoes acquire the virus by feeding on the infected human or non-human primates and then spread it to other human or non-human primates. Infected people are infectious to mosquitoes (known as "viremic") shortly before the fever and within 5 days after the onset of the disease.

There are three transmission routes of yellow fever virus, including the jungle (sylvatic) cycle, the intermediate (savannah) cycle, the urban cycle [5][6]. They are known as yellow fever virus transmission cycles. In the jungle (sylvatic) cycle, mosquitoes of the forest canopy disperse virus to non-human primates (such as monkeys) and secondarily to humans entering the jungle. The intermediate (savannah) cycle in which virus enters rural towns and villages bordering jungle areas in Africa. In this cycle, the virus can be propagated from monkey to human or from human to human via mosquitoes. Within urban areas, YFV can rapidly spread due to mosquito–human–mosquito transmission (mainly refers to Aedes aegypti mosquitoes). 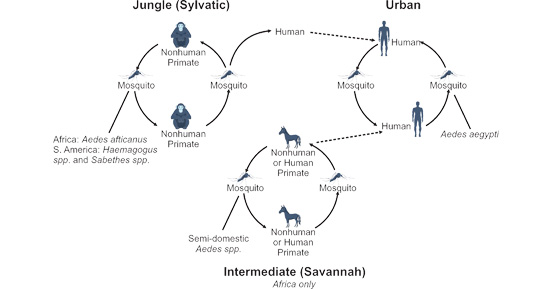 At present, there is no specific treatment or antiviral drugs for YF infection. Supportive care for YF is actually ineffective, and even access to ICU does not seem to improve prognosis or change mortality. Mosquito bite prevention, effective vector control, and mass vaccination campaigns are three potent measures for yellow fever. Dispersal of yellow fever can be most effectively controlled by directly eradicating mosquitoes. In addition, vaccination in yellow fever–endemic countries is necessary.