Epstein-Barr virus (EBV), also known as human herpesvirus 4, is a member of the herpes virus family. It is one of the most common human viruses. EBV is found worldwide and is a common cause of viral pharyngitis, especially in young adults. Most people get infected with EBV at some point in their lives without even knowing it. EBV spreads most commonly through bodily fluids, primarily saliva. EBV can cause infectious mononucleosis, also called mono, and other illnesses.

Read on to learn more about EBV, including structure, the important proteins, infection mechanisms, infection Symptoms, transmission, Diagnosis and Treatment.

The Structure of Epstein-Barr virus

Epstein-Barr virus is about 122–180 nm in diameter and is composed of a double helix of deoxyribonucleic acid (DNA) which contains about 172,000 base pairs and 85 genes. [1] The DNA is surrounded by a protein nucleocapsid, which is surrounded by a tegument made of protein, which in turn is surrounded by an envelope containing both lipids and surface projections of glycoproteins, which are essential to infection of the host cell.[2] 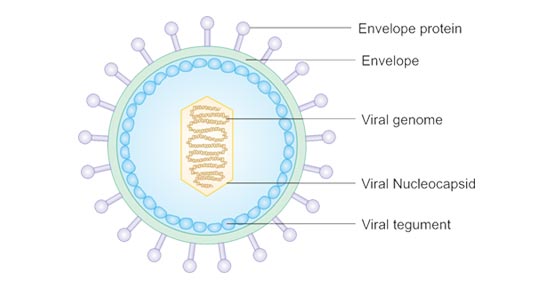 Figure 1. The structure of EBV

To enter B cells, viral glycoprotein gp350 binds to cellular receptor. Then, viral glycoprotein gp42 interacts with cellular MHC class II molecules. This triggers fusion of the viral envelope with the cell membrane, allowing EBV to enter the B cell.[4] Human CD35 is an additional attachment factor for gp350/220, and can provide a route for entry of EBV into CD21-negative cells, including immature B-cells. Once EBV's initial lytic infection is brought under control, EBV latency persists in the individual's B cells for the rest of their life.

Many people become infected with EBV in childhood. Children who contract EBV exhibit few symptoms or may even appear asymptomatic, but when EBV is contracted as an adolescent or adult, it may cause fatigue, fever, inflamed throat, swollen lymph nodes in the neck, enlarged spleen, swollen liver, or rash.

EBV spreads most commonly through bodily fluids, especially saliva. EBV is spread by saliva through kissing, sharing drinks and food, using the same cups, eating utensils, or toothbrushes, having contact with toys that children have drooled on. The virus probably survives on an object at least as long as the object remains moist.

However, EBV can also spread through blood and semen during sexual contact, blood transfusions, and organ transplantations.

The progression of asymptomatic or primary infections to:

EBV infection can be confirmed with a blood test that detect specific antibodies to EBV, including:

There is no vaccine to protect against EBV infection. And because they’re caused by a virus, EBV infections don’t respond to antibiotics. Treatment focuses on managing common symptoms, including: