Poxviruses, family Poxviridae, are responsible for a wide range of pox diseases in humans and other animals. Most notably variola virus (VARA), the cause of smallpox, was declared eradicated worldwide in 1980 by the World Health Organization. So what is the structure of poxvirus? And how many genus of poxvirus in the world?

What is the Structure of Poxvirus?

Poxviruses are brick or oval-shaped viruses with large double-stranded DNA genomes. The poxviruses are the largest of all animal viruses and visualized with light microscopy. By electron microscopy the poxviruses are brick- shaped or oval structures, measuring 200 to 400 nm. The nucleosome contains double-stranded DNA, which is surrounded by a membrane. The outer surface of the lipoprotein bilayer has surface tubules that are randomly arranged and give the virion its characteristic textured appearance. The lipid composition of the membrane is different from that of the host cell membrane. The nucleoprotein core, lateral bodies, and membrane are infectious as a unit, but the virus also often acquires an envelope [1] [2].

Poxviruses are among the most complex viruses known. Poxviruses have linear, double-stranded DNA genomes that are very variable from 130 to 230 kbp in different poxvirus species. As depicted in Figure 2, the two DNA strands are connected at their termini and form a continuous polynucleotide chain [3] [4]. The hairpin termini exist in inverted and complementary forms that are incompletely base-paired and AT-rich [5]. 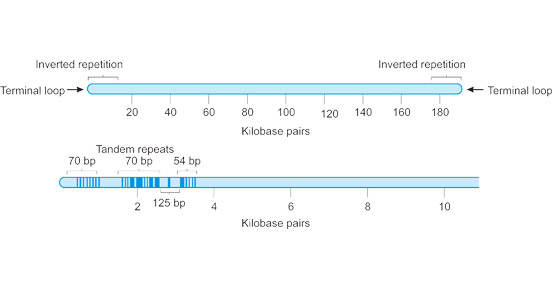 The Classification of Poxvirus

Table 1. Genera and main species of the Chordopoxviriae subfamily

See All Related Proteins of Poxvirus

What are Diseases Caused by Poxvirus?

Poxvirus infections typically result in the formation of lesions, skin nodules, or disseminated rash. As mentioned before, among of the ten genera, Orthipoxvirus, Parapoxvirus, Molluscipoxvirus, and Yatapoxvirus contain viruses that cause human infections. Smallpox and molluscum contagiosum are specifically human diseases. The genus Leporipoxvirus includes myxoma virus, which causes the fatal disease myxomatosis in European rabbits and was used successfully to control rabbit plagues. In this section, we focus on the Smallpox and molluscum contagiosum.

Before smallpox was eliminated, it was mainly spread by direct and fairly prolonged face-to-face contact between people. Moreover, smallpox can also spread through contact with contaminated clothing and bedding, although the risk of infection from these sources is less common. In rare instances, smallpox can spread via the air in enclosed settings, such as a building (airborne route).

The first symptoms of smallpox usually appear 10 to 14 days after you're infected. During the incubation period of 7 to 17 days, you look healthy and can't infect others. Following the incubation period, several flu-like signs and symptoms occurs, including fever, overall discomfort, headache and severe fatigue. A few days later, flat, red spots appear first on your face, hands and forearms, and later on your trunk.

So far, there is no cure or treatment for smallpox except for vaccine. A vaccine can prevent smallpox, but the risk of the vaccine's side effects is too high to justify routine vaccination for people at low risk of exposure to the smallpox virus. Once you have developed the smallpox rash, the vaccine will not protect you.

As molluscum contagiosum is self-limited in healthy individuals, treatment may be unnecessary. You can take some measure to help prevent the spread of the virus, such as keeping your hand clean, avoiding touching the bumps directly and rejecting to share personal items. If you have molluscum contagiosum on or near your genitals, don't have sex until the bumps are treated and have completely disappeared.

As mentioned before, variola virus (VARA) and vaccinia virus (VACV) are the most notably poxvirus around the world. CUSABIO provides a larger number of protein about VARA amd VACV. In this section, we list several proteins of VARA and VACV. Of course, besides the proteins shown on the follows, CUSABIO also provides proteins of genus of other poxviruses. If you are interested in them, you can contact us by the livechat.