The flaviviruses originated about 100,000 years ago in a common ancestor with a separation between mosquito-borne and tick-borne flaviviruses about 40,000 years ago [1]. They were originally considered as togaviruses on the basis of the similar structural constitution. Differences in gene sequence and replication strategy led the genus flavivirus to be classified into a member of the Flaviviridae, a family of positive, single-stranded, icosahedral enveloped RNA viruses that are found mainly in mosquitoes and ticks and can occasionally contract humans [2][3]. The name of flavivirus derives from the Latin flavus that means "yellow", consistent with the jaundice caused by yellow fever virus.

The genus Flavivirus is composed of more than 70 recognized arthropod-borne viruses (or arboviruses) serologically related and broadly distributed [4]. However, individual species are restricted to certain geographical distribution, which is dependent on the ecology of their vertebrate and invertebrate hosts.

The flavivirus virion is spherical particle about 50 nm in diameter, with an approximately 11 kb genome. The viral genome has a type I cap structure at the 5′-terminal portion, which also possesses the conserved dinucleotide sequence 5′-AG-3′-CU. Most flaviviruses, except for a few tick-borne Encephalitis virus (TBEV) strains, lack a poly-A tail at the 3′-end of the genome and end up with the dinucleotide 5′-CU-3′. The genome comprises an about 11 kb large open reading frame (ORF) coding for a single polyprotein that is post-translationally cleaved into ten proteins. Among these proteins, three structural proteins, including capsid (C), pre-membrane (prM), and envelope (E), make up the viral particles. Seven nonstructural (NS) proteins (NS1, NS2A, NS2B, NS3, NS4A, NS4B, and NS5) are required for viral replication ＆ assembly and regulation of the host cell response.

Its RNA is contained within the capsid, constituting an isometric nucleocapsid [5]. The nucleocapsid is further surrounded by a lipid bilayer from the host cell plasma membrane, and two virally encoded membrane proteins E and PrM are anchored on the lipid bilayer. The E protein is responsible for the receptor-mediated endocytic fusion and subsequent cell entry, as well as direct viral assembly and budding [6]. Besides, the E protein of flaviviruses also harbors the antigenic determinants that induce neutralizing antibodies [7]. The PrM can block premature fusion of the virus during its trafficking out of the cell. 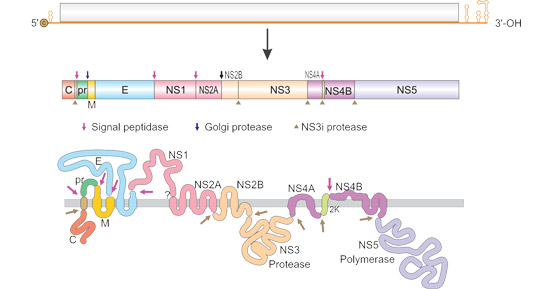 Figure 1. The structure of Flavivirus RNA

*This diagram is derived from viralzone.expasy.org

Flaviviruses invade target cells via bites by an infected vector. They enter the host cells through receptor-mediated endocytosis and then are transported into endosomes, where the mild acidic conditions stimulate the fusion of the viral membrane with the endosomal membrane, resulting in the disassembly of nucleocapsid and the release of viral genomic RNA in the host cell cytoplasm [7][8]. In the host cell cytoplasm, the released RNA exploits host cell machinery and functions to encode three structural proteins and seven nonstructural proteins, finally completing the replication and assembly of progeny viruses [9]. Flaviviruses are initially synthesizd as immature particles containing a precursor form of the M protein (prM), which is cleaved by the cellular protease furin to produce mature virions [10]. The mature infectious viral particles are released into extracellular medium by exocytosis. 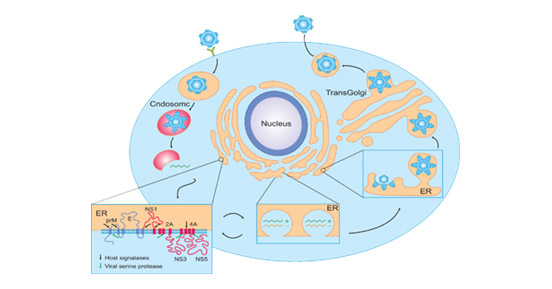 Flaviviruses are subdivided into three types: mosquito-borne viruses, tick-borne viruses, and no-vector viruses [11]. All human flaviviruses belongs to the first two types, and the third group holds a few viruses which have been isolated from mice or bats. However, there has no arthropod vector or natural transmission route has yet been demonstrated. Below list some emerging and re-emerging flaviviruses.

Most flaviviruses are zoonotic pathgens and can cause various diseases. Here list some of common diseases caused by flaviviruses below.

Although most pathogenetic flaviviruses are transmitted by infected mosquitoes or ticks bites, ZIKV can spread directly from person to person through sexual contact or vertically from mother to fetus [15]. Besides, TBEV infections can also occur via the consumption of unpasteurized contaminated dairy products [16]. Most flaviviruses are zoonotic and depend upon non-human animal vectors for their survival, replication, and dispersal with the exception of DENV which propagates mainly in humans. Transmission by mosquitoes between people has only been reported for dengue virus, yellow fever virus, and West Nile virus that cause diseases in which human beings are usually dead-end hosts.

Because most of the flaviviruses are dispersed by mosquito or tick bites between human beings, so blocking or reduce infectious sources - mosquitoes or ticks, is necessary. Mosquito eradication includes sanitation improvement, fumigation with insecticides and reduction in standing water areas where mosquitoes reproduce. It is the primary method of controlling mosquito-transmitted flaviviruses. In addition, preventing mosquito or tick bites is of importance. Vaccination is also necessary.

There is no specific treatment for these infections. Treatment involves managing the symptoms that develop.