West Nile virus (WNV) is a member of the family Flaviviridae, specifically from the genus Flavivirus, which also contains the Zika virus, dengue virus, and yellow fever virus. It is a mosquito-borne arbovirus that was discovered in 1927 in the West Nile sub-region of Uganda.

West Nile virus is primarily transmitted by mosquitoes, mostly species of Culex. The primary hosts of WNV are birds, but it can also affects mammals and reptiles. [1] People who get WNV usually have no symptoms or mild symptoms, up to 1% of those who become ill have serious and potentially fatal complications.

Read on to learn more about WNV, including structure, the important proteins, infection mechanisms, infection symptoms, transmission, diagnosis and treatment.

WNV is a positive-sense, single-stranded RNA virus. Its genome is approximately 11,000 nucleotides long. The coding region of the genome codes for three structural proteins and seven nonstructural proteins. The WNV genome is first translated into a polyprotein and later cleaved by virus and host proteases into separate proteins. [2]

Like most other flaviviruses, WNV is an enveloped virus with icosahedral symmetry.[3] The protein shell is made of two structural proteins: the glycoprotein E and the small membrane protein M. Protein E has numerous functions including receptor binding, viral attachment, and entry into the cell through membrane fusion.[4]

The RNA genome is bound to capsid proteins, which are 105 amino-acid residues long, to form the nucleocapsid. The capsid proteins are one of the first proteins created in an infected cell, it is a structural protein whose main purpose is to package RNA into the developing viruses. The capsid has been found to prevent apoptosis by affecting the Akt pathway. [5]

West Nile encephalitis is an infection of the brain that is caused by West Nile virus. First identified in Uganda in 1937, the virus is commonly found in Africa, West Asia, and the Middle East. 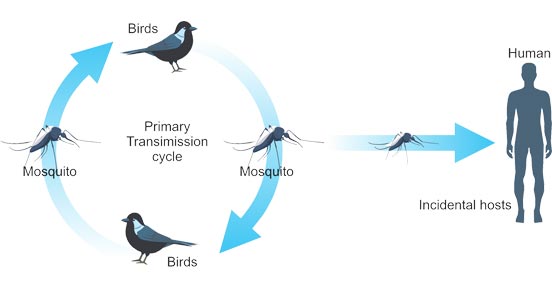 Direct human-to-human transmission initially was believed to be caused only by occupational exposure, such as in a laboratory setting, [6] or conjunctival exposure to infected blood. [7] The US outbreak identified additional transmission methods:

Diagnosis of West Nile virus infections is generally accomplished by serologic testing of blood serum or cerebrospinal fluid, which is obtained via a lumbar puncture. Initial screening could be done using the ELISA technique detecting immunoglobulins in the sera of the tested individuals. Definitive diagnosis of WNV is obtained through detection of virus-specific antibody IgM and neutralizing antibodies.

No vaccine or specific antiviral treatments for West Nile virus infection are available. Most patients make a full recovery without medical treatment.

Rest and acetaminophen can be used to treat the symptoms associated with West Nile virus infection. Severe symptoms will require hospitalization and supportive treatment, such as assistance with breathing and intravenous fluids, pain medication and prevention of secondary infections.