Rabies virus (RABV), also known as rabies, is a deadly virus spread to people from the saliva of infected animals. The rabies virus is usually transmitted through a bite. So how terrible rabies is? Some people say it is more terrible than AIDS and cancer, because its mortality rate is almost 100%. According to the statistics of the World Health Organization (WHO), about 35,000 to 50,000 people die from rabies every year in the world. It is the acute infectious disease with the highest human fatality rate so far.

What is The Structure of Rabies?

Rabies virus (RABV), a negative-stranded RNA virus, belongs to the genus Lyssavirus of the Rhabdoviridae family [1]. RABV is characteristic by rod- or bullet-shaped rhabdovirus virion observed through electron microscopy (Figure 1). The nucleocapsid is spirally symmetrical, the surface has an envelope, and it contains single-stranded RNA. The virus particle has a capsule outside and a nucleoprotein shell inside. The outermost layer of the capsule has many fibrils composed of glycoproteins, which are arranged neatly. This protrusion is antigenic and can stimulate the body to produce neutralizing antibodies. 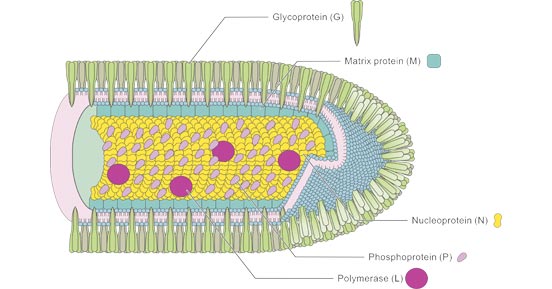 Figure 1. The structure of RABV

All rhabdoviruses encode five structural proteins: nucleoprotein (N), phosphoprotein (P), matrix protein (M), glycoprotein (G), and an RNA-directed RNA polymerase (L). RABV genome consists only of these five [3]. N encapsulates the RNA genome, forming a tightly wound N-RNA complex known as a ribonucleoprotein (RNP) [4]. The RNP is condensed into a helical nucleocapsid (NC) with L and P. P is a noncatalytic cofactor for the polymerase L. M surrounds the NC, forming a bridge between the NC and the viral envelope. G, which is trimeric and interacts at its cytoplasmic side with M, is the only protein exposed on the surface of the rhabdovirus envelope and is the sole ligand for the cellular receptor.

See All Related Proteins of Rabies-Virus

How to Transmit Rabies to Animal or Person?

In rare cases, rabies can be spread when infected saliva gets into an open wound or the mucous membranes, such as the mouth or eyes. This could occur if an infected animal were to lick an open cut on your skin.

What is Pathogenesis of Rabies?

Accumulating evidences have proved that the pathogenesis rabies can be divided into three stages during the incubation period and the onset period without viremia.

What are The Symptoms of Rabies?

The first symptoms of rabies may be very similar to those of the flu and may last for days. Later signs and symptoms may include: fever, headache, nausea, vomiting, agitation, anxiety, confusion, hyperactivity, difficulty swallowing, excessive salivation, fear brought on by attempts to drink fluids because of difficulty swallowing water, hallucinations, insomnia and partial paralysis.

How to Prevent Yourself from Rabies?

As you know, rabies is the acute infectious disease with the highest human fatality rate so far, and is preventable and incurable. So the prevention of rabies cannot be delayed. You can take the following measures to prevent yourself form rabies: