Human immunodeficiency virus (HIV) is a retrovirus belonging to the genus Lentivirus within the family of Retroviridae, subfamily Orthoretrovirinae [1]. Like other lentiviruses, HIV causes chronic persistent infections in various mammalians such as human, horse, bovine, sheep, feline, and primate. As a pathogen, HIV works by attacking and damaging the human immune system. The discovery of AIDS in the early 1980s led to subsequent identification of HIV, which gradually spread globally.

Based on the genetic characteristics and differences in the viral antigens, HIV is divided into HIV-1 and HIV-2.

HIV-2 was a new strain found off the West coast of Africa in 1986 [3]. HIV-2 is significantly different from the original HIV-1 strain. Although they possess almost the same set of genes and very similar pathological effects, HIV-2 is only a distant relative of HIV-1. Interestingly, HIV-2 is closely related to the Simian Immunodeficiency Virus (SIV) that causes immunodeficiency in domestic macaques. HIV-1, HIV-2, and SIV are believed to share a common ancestor, but both HIV-2 and SIV express an additional viral protein that HIV-1 lacks. HIV-2 is less contagious and progresses more slowly than HIV-1, leading to fewer deaths. And HIV-2 can be subdivided into groups A-H.

HIV is generally spherical, with a diameter of about 120 nm. The outer membrane of the virus is a bi-layer lipid envelope, which comes from the host cells and is embedded with the spikes of viral proteins gp120 and gp41. Gp41 is a transmembrane protein. Gp120 is located on the surface of gp41 and binds to gp41 through noncovalent interaction. Inward is the p17-formed spherical matrix, which holds the p24-constituted semicircular capsid in the center of the viral particle. The capsid presents high electron density under the electron microscope. The capsid contains the viral RNA genome, enzymes (reverse transcriptase, integrase, protease), and other components from the host cell (such as trnalys3, as a primer for reverse transcription). 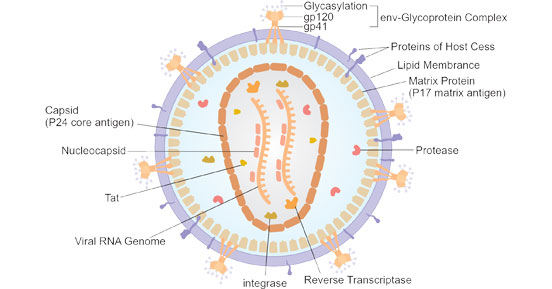 Figure 1. The diagram of HIV structure (Souring from Wikipedia)

The genome of the HIV is composed of two identical positive, single-stranded RNA, each of which is about 9.2-9.8kb in length. The two ends of each RNA are long terminal repeats (LTRs), which contain cis-regulatory sequences to control the expression of the virus. LTR has been proved to possess promoters, enhancers, and negative regulatory regions. The reading frame between LTRs contains nine genes encoding proteins essential to the assembly of new viruses. 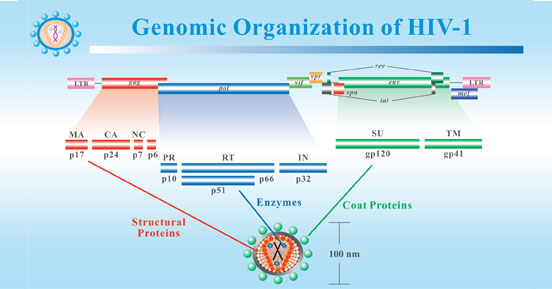 *This diagram is derived from the website of Stanford Education.

Table: The genes in the reading frame of HIV genome and their encoding proteins

See All Related Proteins of Human-Immunodeficiency-Virus

Like all viruses, HIV can not replicate on its own. HIV must infect the CD4-containing target cells, such as T helper cells, macrophages, dendritic cells, and astrocytes. HIV most commonly enters the bloodstream by sexual intercourse or blood-borne transmission through the genital or colonic mucosa. The innate condition that the spikes of gp120 and gp41 protruding on the envelope of the virus enables HIV to lock on the CD4 receptor of CD4 T cells and enter the cells.

When the C4 domain of gp120 is attached to the CD4 molecule, the conformation of CD4 and gp120 changes, which opens an additional site for gp120 to bind to the co-receptor of the cell surface, such as chemokine receptor 5 (CCR5) or CXCR4. The binding of gp120 with CD4 and co-receptors results in conformational changes of gp120 and gp41. The N-terminal of gp41 is located on the viral membrane, forming a channel that inserts into the plasma membrane of the target cell because of its high hydrophobicity. The cell membrane and virus envelope eventually complete the fusion. The HIV genome is released into the host cell and then hijack the host cell’s machinery to replicate its new copies. The progeny viruses are liberated out of the host cell through budding.

AIDS, also known as acquired immunodeficiency syndrome, is a systemic, infectious disease resulting from immunological dysfunction caused by HIV infection. Once infected with HIV, you will be more prone to other diseases. As the immune system weakens, afflicted people tend to be more susceptible to opportunistic infections such as Pneumocystis carinii pneumonia, Toxoplasma gondii encephalitis, and several uncommon cancers like Kaposi Sarcoma.

The entire process from HIV infection to the onset of typical AIDS symptoms can be divided into three stages:

People living with HIV and AIDS patients are the infection source of AIDS. HIV mainly exists in the body fluids of the source of infection, such as blood, semen, vaginal necessities, cerebrospinal fluid, pleural and ascites fluid, amniotic fluid, milk. Daily contact, such as shaking hands, hugging, kissing, swimming, mosquito bites, sharing utensils, coughing, or sneezing, will not cause infection. Here are three main routes of transmission:

At present, there is no cure for AIDS in the world, but proper treatment can delay the progression of symptoms, so AIDS should be detected, diagnosed, and treated early. Treatments such as antiretroviral therapy can keep the virus at a low level and help the immune system function properly. Some drugs can interfere with the self-replication of AIDS, and others can prevent the genetic material of the virus from entering immune cells.

Unfortunately, no effective HIV vaccines that prevent HIV infection or delay the progress of AIDS are available. Cutting off the transmission of AIDS is an important way to prevent and control AIDS. And Pre-exposure prevention can reduce the risk of HIV infection in high-risk groups.