Influenza, also known as the flu or grippe, is an infectious viral disease that affects the upper respiratory system, including your lungs, throat and nose. Influenza is a respiratory infection commonly found in humans, pigs, horses and other poultry and wild birds. It is characterized by rapid onset, rapid infection, wide spread and threat to the safety of human life. According to international classification of icd-10, the disease code for influenza is j11-101.

4. The Cause of The Influenza

8. How to Prevent The Influenza?

Since the 6th century, there has been a record of influenza epidemics in almost every century. The 1918 flu (the so-called Spanish flu) was by far the most devastating pandemic in the world, infecting more than half the world's population and killing an estimated 20 to 50 million people. The flu swept through Eurasia and also invaded Africa and Oceania [2]. In addition, there were three influenza pandemics in the 20th century, It occurred from 1946 to 1947, from 1957 to 1958 (Asian flu), and from 1968 to 1969 (Hong Kong flu).The pandemics of 1957 and 1968 led to more than 4 million deaths and more than 1 million deaths (38,252), respectively.

Influenza A virus is an RNA virus with an eight-segment, single-stranded, negative-sense genome, belonging to the Orthomyxoviridae family. All subtypes of influenza A are known to exist in birds, particularly in waterfowl, and the virus can infect other animals such as pigs, horses, seals, whales and minks.

◆ Examples of Type A Virus

Avian Influenza: Avian influenza (AI) is an influenza A virus. Avian influenza viruses generally only infect birds. This interspecific transmission disorder is thought to be determined by a variety of viral genetic determinants, including viral HA and NA genes, as well as other internal genes such as nuclear proteins and PB2 genes. When the virus undergoes genetic reassortment during replication, resulting in structural changes, it is possible to acquire the ability to infect humans. The avian influenza virus subtypes that can directly infect humans are: H5N1, H7N1, H7N2, H7N3, H7N7, H9N2 and H7N9 subtypes.

◆ Variation of Influenza A Virus

Type A influenza virus often has antigenic variation, which is highly contagious and spreads rapidly, and can easily occur large-scale epidemics. Many influenza pandemics in history have been caused by influenza A viruses.

The variation of influenza A virus is reflected in the generation of new virus types through genetic recombination. The 1957 pandemic and the 1968 pandemic flu virus was produced by genetic recombination [7] [8] [9]. In contrast, the 1918 pandemic was thought to be due to a purely avian influenza virus that directly adapted to humans for effective transmission [10].

In addition, influenza virus RNA does not have a corrective function during replication, and its frequency of mutation is higher than other viruses. This is also the main reason for the flu virus variation.

No other natural hosts have been found other than infected people. Influenza B viruses often cause local outbreaks and do not cause a worldwide influenza pandemic. The nomenclature of influenza B and C viruses is the same as that of influenza A viruses, but there are no subtypes.

It can infect pigs as well as people. Type C influenza virus mainly appears in the form of dispersal, mainly affecting infants, and generally does not cause pandemic. 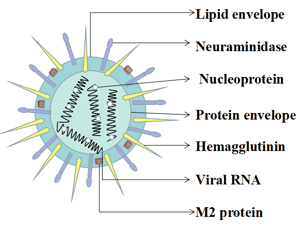 4. The Cause of The Influenza

Influenza transmission: The flu is contagious and is mainly transmitted by airborne droplets. It can also be transmitted directly or indirectly through the mucous membranes of the mouth, nose, eyes, etc. Exposure to the patient's respiratory secretions, body fluids, and contaminated items may also cause infection. Transmission through the respiratory tract through the aerosol remains to be confirmed.

Sources of infection: Influenza patients and latent infections are the main source of infection for the flu. It is contagious from the end of the incubation period to the acute phase of the onset.

On the one hand, when droplets of influenza virus particles are inhaled into the respiratory tract, the neuraminidase of the virus destroys the neuraminic acid, causing the mucin to hydrolyze and the glycoprotein receptor to be exposed. Hemagglutinin (HA) of influenza A and B viruses bind to the surface of epithelial cells containing sialic acid receptors to initiate infection.

On the other hand, influenza viruses enter cells by intracellular endocytosis. The M2 polypeptide ion channel on the viral envelope is activated by acidic pH, allowing nucleocapsid proteins to be released into the cytoplasm (uncoating). The nucleocapsid protein is transported to the host nucleus where the viral genome is transcribed and duplicated. The synthesized viral nucleoprotein enters the nucleus and binds to the viral RNA to form a nucleocapsid and is exported to the cytoplasm. After being completely processed and modified, the viral membrane protein is embedded in the cell membrane and releases progeny virus particles (buds) in a budding manner. Finally, the host protease hydrolyzes HA into HA1 and HA2, making the virus particles infectious.

Common symptoms and signs of influenza include: The flu is characterized by rapid onset, sore throat, cough, and salivation, accompanied by fever, chills, headache, weakness, nasal congestion, fatigue, and muscle and joint pain.

Suffering from influenza reduces the body's resistance, and the body is susceptible to microbial and viral infections, causing complications.

The most common complication of influenza is pneumonia, and influenza is the most serious form of pneumococcal pneumonia. Pneumococcal has an important synergistic lethal effect in influenza-related deaths. Other studies have confirmed that about 50% of patients who died of pneumonia in the 1918 influenza pandemic had pneumococcal bacteremia.

It often occurs after influenza in children. It is characterized by swelling of the calf or thigh, severe pain and tenderness in the muscles, and the symptoms are relieved automatically after one week. The disease is related to the spread of influenza A and B viruses, sporadic infections or parainfluenza virus infections.

Haemophilus influenzae meningitis is a serious disease that jeopardizes children's health. Haemophilus influenzae is one of the main pathogens of bacterial meningitis in children worldwide, and it has the characteristics of high incidence rate and high disability rate. The age of onset of H1 meningitis is younger, and the high-risk age group is from August to 4 years old, especially under 2 years old. This is related to the characteristics of humoral immunity in children during this period.

People at higher risk of developing flu complications include:

The diagnosis of influenza disease is generally based on etiology, clinical presentation and laboratory examination.

8. How to Prevent The Influenza?

Flu is highly capable of being transmitted from person to person, and it is more important to actively prevent and control than limited effective treatments.

Vaccination is considered the most effective way to prevent influenza. The centers for disease control and prevention (CDC) recommends everyone six months or older get a flu shot. The annual seasonal flu vaccine contains protection from three or four flu viruses that are expected to be the most common during the flu season that year. The best time to get a flu shot is before the start of the annual flu season.

Universal influenza vaccine. The rapid variability of influenza viruses severely limits the long-term protection of vaccines. Existing influenza vaccines do not induce cross-protection between different subtypes and are faced with the problem of timeliness and effectiveness.

Corti et al [15] published the results of the flu study on Science - a superantibody FI6 antibody that neutralizes all influenza A viruses. The antibody is isolated from human plasma cells and is demonstrated by animal experiments to protect against the entire influenza A virus. This result may be a turning point in the development of a universal influenza vaccine.

In February 2018, the National Institute of Allergy and Infectious Diseases launched the Universal Influenza Vaccine Strategic Plan. Regarding the study of universal influenza virus, the first concern is the highly conserved M2 and NP proteins in all antigens of influenza A virus, which is the main candidate antigen for the current universal influenza vaccine. The M2 protein is a transmembrane protein, and the NP protein is a major component of the ribonucleoprotein RNP. Currently, vaccines developed based on M2, M2e and NP include fusion protein subunit vaccine [16], DNA vaccine [17] [18], recombinant virus-like particle (V1F) vaccine [19] and peptide vaccine [20] [21]. These vaccines, based on M2, M2e and NP, can be induced to produce broad-spectrum cross-immune protection for different types or subtypes of viruses in animal models.

Influenza vaccine dose. Children between 12 and 35 months were given two doses, 0.25ml per dose, with an interval of one month. For children over 36 months and adults, 1 dose is given, 0.5ml per dose. Both children and adults are intramuscularly injected into the upper arm deltoid muscle. Never inject intravenously.

Vaccination may cause some symptoms, such as flu urticaria, caused by flu shots.

In 2018, The Global Virome Project was launched and the flu epidemic was an important direction of the project. In fact, as early as 1952, the World Health Organization (WHO) established a global influenza surveillance network. Previously, Google Trend was able to determine the prevalence of influenza in a certain area based on the index of the user's search keyword.

8.3 Control The Spread of Infection

Influenza vaccines are not 100% effective, so it is important to take these measures to reduce the spread of infection: