How do Th1 and Th2 Cells Differentiate?

Depending on the cytokines they synthesize and secrete, CD4+ helper T cells (Th) can be divided into two subgroups, type I helper T lymphocytes (Thl) and type II helper T cells (Th2) [1]. Both types of cells are differentiated from common T cell helper precursor (Thp). Although the differentiation of T cells is affected by antigen concentration or co-stimulatory molecules, cytokines are the most effective regulators of Th cell differentiation. In addition, the effects of extracellular microenvironment and transcription factors have also played a major role.

Although Th1 and Th2 are differentiated from common precursor cells, there are certain differences between them:

Here, we list part of CUSABIO methylated histone antibodies on the table 1.

Under normal circumstances, the differentiation of Thl/Th2 cells is in a balanced state, and once the balance of Thl/Th2 cells is shifted, it will lead to the occurrence of diseases [2]. Overexpression of Th2 can lead to inappropriate immune responses, leading to diseases such as allergies and asthma. Overexpression of Th1 or Th17 can lead to autoimmune diseases such as rheumatoid arthritis and multiple sclerosis [3] [4]. 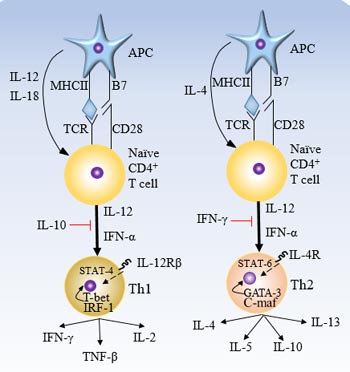 In addition to cytokines, many transcription factors are involved in the differentiation of Th1 cells and Th2 cells.

Members of the NFAT family (NFAT1, NFAT2, NFAT3, NFAT4, NFAT5) have highly conserved DNA and calcineurin binding sites. NFAT is phosphorylated by calcineurin and transported into the nucleus. Then it binds to AP-1 under the action of protein kinases such as Ras/Raf-MEK-ERK, and the formed NFAT-AP1 complex binds to DNA and mediates gene transcription.

C-maf is a transcription factor that is specifically expressed in Th2 cells. Activation of C-maf induces IL-4 expression and promotes Th2 differentiation. The researchers found that C-maf also promotes Th2 differentiation via an IL-4-independent pathway. In addition, C-maf is significantly associated with the expression of IL-4R and IL-5R, which may also be an important factor in C-maf regulation of IL-4 gene expression.

T-bet can be activated by the IFN-γ-STAT1 pathway, which plays a key role in stabilizing Thl cell phenotype.

In Th2 cells, T-bet can synergize with Runx3 to activate IFN-γ. T-bet also binds to an IL-4 silencer region and inhibits IL-4 expression [16].

GATA-3 is a GATA family transcription factor that is selectively expressed in Th2 and is up-regulated during Th2 differentiation [17]. It regulates the expression of IL-4, IL-13 and IL-5.

Many signaling pathways are involved in T cell differentiation, and the main ones are as follows: Delta-like and Jagged ligands induce polarization of T cells to Thl and Th2, respectively, which is independent of IL-4 / STAT6. 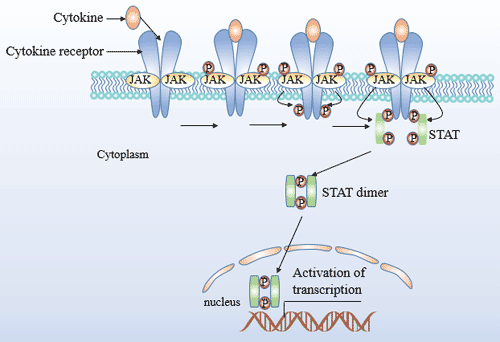 IFN-γR and IL-12R-mediated signal transduction play an important role in the differentiation of Th1.

IFN-γR1 and IFN-γR2 were respectively bound to and tetramerized with IFN-γ. Then IFN-γR1 and IFN-γR2 are phosphorylated by JAK1 and JAK2, respectively, and STAT1 is recruited. The recruited STAT1 is phosphorylated and activated, detached from IFN-γR, dimerized and transferred into the nucleus, and binds to the GAS cis-acting element of the IFN-γ gene, thereby promoting transcription and expression of the IFN-γ gene.

During the differentiation of Th2, the JAK1/3/STAT6 signal transduction pathway is mainly mediated by IL-4R and IL-13R. 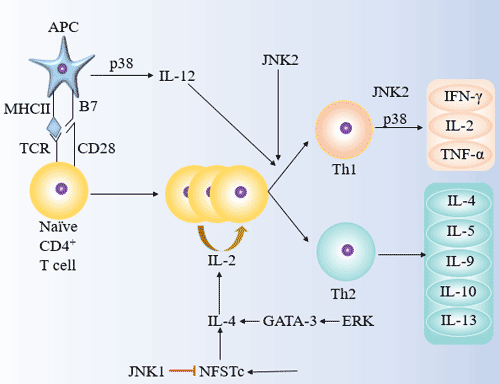 Figure 5 The roles of JNK, p38 and ERK in Th1/Th2 differentiation

The role of JNK in inducing Thl/Th2 differentiation

JNK is a stress-activated protein kinase (SAPK), including JNK1/2/3. JNK/SAPK can phosphorylate c-Jun, ATF-2 and increase its transcriptional activity, and promote the expression of c-Fos, c-Jun and ATF-2 regulatory genes.

The role of p38 in inducing Th1/Th2 differentiation is bidirectional. The p38MAPK pathway may induce Th1 cell differentiation by activating IFN-γ transcription. P38 can also alter the immunomodulatory function of DC by promoting the secretion of IL-12 in DC, which induces differentiation of CD4+ T cells into Th1 and mediates Th1 type immune response.

The TCR-induced Ras-ERK/MAPK pathway is capable of inducing Th2 differentiation and mediating the Th2-type immune response. Calcineurin (CaN) is a Ca2+/Calmodulin (CaM)-dependent serine/threonine phosphoprotein phosphatase that catalyzes the dephosphorylation of a variety of already phosphorylated proteins. CaN plays a role in T cell activation, differentiation and proliferation by activating the nuclear factor of activated T cell (NFAT) [21].

In T cells, Ca2+ levels regulate CaN activity, which in turn plays an important role in the activation of NFAT.

IP3 binds to the IP3 calcium channel in the endoplasmic reticulum, promotes the increase of cytoplasmic Ca2+ concentration, and then activates cytoplasmic CaN, which binds to NFAT and leads to its dephosphorylation and activation. After the translocation of the activated NFAT nucleus, it combines with transcription factors such as AP-1 family proteins and other activation factors to form a complex to jointly regulate the expression of cytokines. Normally, NF-κB and its inhibitor I-κB are present in the cytosol. Activation of upstream kinases (such as NF-κB-inducible kinase or MEKK1) leads to activation of I-κB kinase and phosphorylation of I-κB protein, which separates and degrades phosphorylated I-κB protein from NF-κB. Free NF-κB transfected into the nucleus to activate the target gene. The role of NF-κB in the differentiation of Th cells is just beginning. It has been found that inhibition of NF-κB activity blocks GATA-3.

The Hedgehog signaling pathway is also somewhat related to T cell differentiation. We found that the key Th2 cytokine IL-4 is a novel transcriptional target of Hh signaling in T cells, providing a mechanism for the role of Hh in Th differentiation [22].