Adipocyte is also called fat cell. Once we heard the word "fat," we immediately thought of bloated bodies, unhealthy diets, and behind-the-scenes of certain chronic diseases. But do we really understand fat cells? This article collects several basic knowledge about adipocyte.

Adipocytes, also known as lipocytes and adipose cells, are the cells that primarily compose adipose tissue, specialized in storing energy as fat. Adipocytes are derived from mesenchymal stem cells which give rise to adipocytes through adipogenesis. Generally speaking, connective-tissue cell specializes to synthesize and contain large globules of fat.

Note that, obesity does not depend on the number of fat cells, but depend on the size of the fat droplets in each fat cell. An average adult has about 30 billion white adipocytes and weighs 13.5 kg. White adipocytes can increase in volume by a factor of 100, and once adipose cells accumulate and swell, they become difficult to disappear or return to their original state. 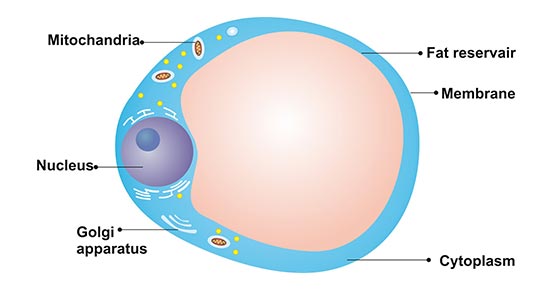 Figure 1. The Structure of Adipocyte

What is The Function of Adipocyte?

As mentioned before, adipocyte has closely relationship with obesity. The fat of white adipocytes is stored in a semi-liquid state, mainly triglycerides and cholesterol esters. This type of fat cells make up a large amount of fat in obese patients. Brown adipocytes is brown because of a large number of mitochondria in it. These mitochondria decompose and burn fat, which directly convert white fat stored in the body into heat and reduce fat accumulation. Brown adipocyte plays an important role in the development of obesity.

Actually, adipose cell besides cause fat, it still has a lot of function, store energy, and active to the brain, liver, muscle, genital organ and immune system sends powerful chemical signal, direct a variety of activity inside human body.

The Marker of Adipocyte

AIn the last section of this article, we list the most common markers of adipocyte on the following table. Adipocyte markers refer to several special proteins which distinguish adipocyte from other cell types.