Neural stem cells (NSCs) are self-renewing, multipotent cells that generate the basic cell types of the nervous system. Firstly, NSCs generate the common progenitor cells that differentiate neuronal progenitors and glial progenitors. And then the two progenitors differentiate into neurons, astrocytes, and oligodendrocytes, respectively, depending on environmental cues (Figure 1). These three types of cells are the main and important cell types in the central nervous system. Some neural progenitor stem cells persist in highly restricted regions in the adult vertebrate brain and continue to produce neurons throughout life [1] [2].

There are two ways of neural stem cell proliferation: symmetrical and asymmetric division. Symmetrical division produces two stem cells or two progenitor cells, and asymmetric division produces a new stem cell and a progenitor cell. Progenitor cells exist only for a short time only due to the presence of continuous migration and differentiation or post-proliferation. The resulting new cells can fuse into the original neural tissue and survive long-term in the body. These characteristics make NSCs an important element in maintaining the number of cells after central nervous system development, injury, disease, or natural cell renewal [3]. 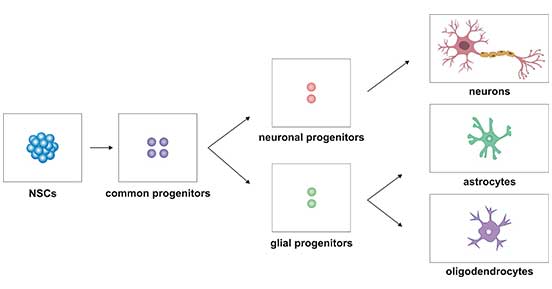 Figure 1. The Subtypes Of NSCs

The Classification of NSCs

According to the differentiation potential and the type of daughter cells, NSCs can be divided into four types: neural tube epithelial cells, radial glial neurons, neuroblast, and neural precursor cells.

Neural tube epithelial cells have the strongest dividing ability, only exist in the embryonic period. They can produce radial glial neurons and neuroblasts. Radial glial neurons can divide to produce itself and produce neuron precursor cells or glial cells at the same time. Its main role is to produce projection neurons during the development of neurons in early childhood to complete the basic neural tissue cells such as the cerebral cortex and nucleus. neuroblast are the NSCs that mainly exist in the adult body can divide into neural precursor cells and neurons and various types of glial cells. Neural precursor cells are precursor cells of various types of neurons, such as microglia, are produced by glial cell precursors.

The use of NSCs in research and medicine is becoming increasingly widespread. The discovery that neurons, astrocytes, and oligodendrocytes arise from NSCs located in specific regions of the brain, such as SVZ and hippocampus, reveals the potential of using NSCs to treat central nervous system diseases, including Parkinson’s and Alzheimer’s disease. Currently, the therapeutic mechanisms of NSCs include:

The Markers of NSCs

Before NSCs therapy, NSCs isolation is the most important process. NSCs markers refer to several special proteins which distinguish NSC from other cell types. We list the most common markers of HSC on the following table.