Cytokines mediate proliferative and activation signals in the innate and adaptive immune system and play roles in normal physiology, with tightly regulated controls of their production, localization, and activity. The complex network of cytokines controlling immune responses is an important part of regulation of the immune system (Figure 1). 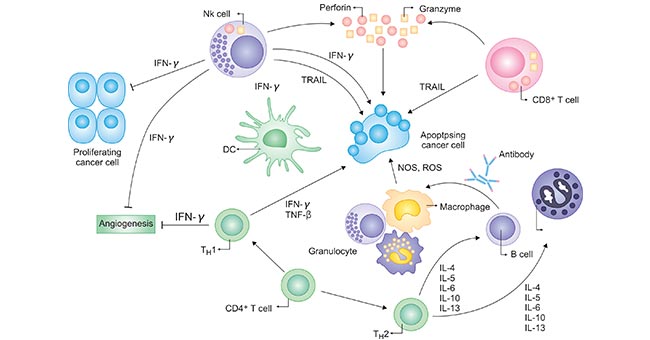 Figure 1. Cytokines exert stimulatory and suppressive signals on many types of immune cells

Cytokines can be exploited therapeutically but may be limited by toxicity due to the triggering of downstream molecules, including other inflammatory cytokines, and by loss of activity owing to counter-regulatory substances, including suppressive molecules that are important for normal physiologic protection from over-reaction to pathogens and cell damage as well as autoreactivity. At present, there are more than 20 kinds of cytokine products approved for market in the world, which are used in the prevention and treatment of many diseases. In this article, we primarily focus on the cytokines involved in cytokine therapy for cancer, including IL-2, IL-4, IL-6, IL-12, IL-15, IL-21, TGFβ and GM-CSF.

IL-2 is widely used to promote the activation and proliferation of T cells and NK cells. IL-2 can stimulate NK cell proliferation, increase cytotoxicity and stimulate NK cells to secrete various cytokines. IL-2 is the only IL that has fully evolved from a partially purified product of activated T cells to a commercially-approved recombinant molecule, readily available, employed in clinical practice and still under investigation for many different combination approaches in tumor immunotherapy [2].

A recombinant human IL-2 (rhIL-2), differing by one amino acid from physiologic IL-2, was FDA approved in 1992 for melanoma and in 1998 for renal cancer. While early efforts to characterize its mechanisms of action led to heightened understanding of cellular and cytokine interactions in malignancy and non-malignant states, more recent efforts have focused on improving the therapeutic index of IL-2 and optimizing its use in complex strategies for antigen-specific and non-specific therapies.

However, one disadvantage of IL2 activation of T cells is that they can activate Treg regulatory cells. Treg cell can inhibit T cell activation and tumor killing. Moreover, IL2 can induce apoptosis of activated T cells. IL-2 can also cause excessive differentiation of T cells, forming aging T cells with weaker killing ability. Currently, the view of IL2 is that it is a regulator of T cells rather than an activator. Therefore, there is a tendency to be replaced by other interleukins such as IL7, IL15, and IL21.

The function of IL-4 includes stimulating the proliferation of activated B cells and T cells, the differentiation of CD4 + T cells into type II helper T cells, and the stimulation of Th2 to secrete IL-4, IL-5, IL-6, IL-10 and IL -13. It plays a key role in regulating humoral immunity and adaptive immunity, inducing B-cell antibody class switching to IgE and up-regulating the production of MHC II. IL-4 can induce the differentiation of monocytes towards DC by inhibiting the growth of macrophages.

A strategy for using IL-4 in glioma treatment is vaccinations with autologous glioma cells and IL-4 gene-transfected fibroblasts [3]. Adult participants with recurrent glioblastoma multiforme (GBM) or anaplastic astrocytoma underwent gross total resection of the recurrent tumors, followed by 2 vaccinations with autologous fibroblasts retrovirally transduced with the IL-4 and thymidine kinase genes and mixed with irradiated autologous glioma cells. The patients who were vaccinated twice demonstrated encouraging immunological and clinical responses [4].

IL-6, also known as B cell stimulating factor 2 (BSF-2), B cell differentiation factor (BCDF) or hepatocyte stimulation factor (HSF), has complex biological effects, including promoting the expression of IL-2r on the surface of T cells, inducing the synthesis of acute phase reactive proteins in the induction of acute phase responses during acute inflammation caused by infection or trauma, and promoting B cell proliferation, differentiation and antibody production.

At first, IL-6 showed early promising antitumor activity in many animal models, so it was applied to clinical trials using initial study designs, including assessment of both intravenous and subcutaneous routes of administration. But, similar to other cytokines, IL-6 caused nonspecific inflammatory toxicities, such as fever, chills and fatigue. Moreover, dose-limiting thrombocytosis, supraventricular arrhythmias and central nervous system toxicity appeared relatively unique to IL-6, and the therapeutic activity was not sufficient to justify its further use as a single agent in cancer [5] [6]. Recently, researchers pay more attention on the possibility that many of the effects of IL-6 could be tumor-promoting, immunosuppressive and pro-angiogenic, and clinical trials of a blocking antibody to IL-6 are now underway for several tumor histologies [7].

Among the cytokines discovered so far, IL-12 is the one with the strongest and most extensive effect on the induction and regulation of immune active cells in vivo. On the one hand, IL-12 is involved in the anti-tumor, anti-allergy and anti-infection processes of the body; on the other hand, the excessive production of IL-12 leads to the imbalance of immune regulation in the body, leading to autoimmune diseases.

The assessment of IL-12 as an antitumor agent in preclinical models has been extensive, directed at a wide variety of malignancies and strategies that exploit its many immune-stimulatory properties, such as activity as a vaccine adjuvant resulting from the potent stimulation of antigen-presenting cells [8] [9]. Before the emerging of immune checkpoint blockade, rhIL-12 seemed to be a promising anticancer cytokine in numerous animal models, including combinations with cytotoxic chemotherapy [10].

IL-15 stimulates the activation and proliferation of T cells by sharing the γc receptor subunit with IL-2. The advantage of IL-15 in immune cell therapy is that it does not cause apoptosis of activated T cells. Another feature of IL-15 in immunotherapy is the maintenance of memory T cells, which plays an important role in long-term anti-tumor activity. The anti-tumor properties of IL-15 stem from its stimulating activity on CD8 + effector T cells, while IL-15 can activate NK cells, NKT cells and γδT cells. The additional role of IL-15 in the survival of mature NK cells, probably mediated by increased expression of the antiapoptotic molecule B cell leukemia 2(bcl-2) [11] , also raises the possibility of broad therapeutic exploitation of IL-15 in cancer immunotherapy.

IL-21, similar to the other members of the IL-2 family, exerts its biological function through a specific receptor subunit and an IL-2 receptor γc subunit complex receptor. The function of IL-21 includes promoting the proliferation of CD4+ and CD8+ T cells, and enhancing the cytotoxicity of CD8+ T cells and NK cells without causing apoptosis caused by activation.

Comparing with IL-2, a critical feature of IL-21 is the preferential expansion of the CD8+ T cells with CD27+/CD28+. This type of cells is generally considered to be "young" T cells with stronger cytotoxic effects. At the same time, IL-21 will not cause the expansion of Treg cells. Because IL-21 stimulates the production of antigen-specific T cells in vitro and improves its affinity for antigens, it has become more and more widely used in immune cell therapy.

Comparing with IL-2, a critical feature of IL-21 is the preferential expansion of the CD8+ T cells with CD27+/CD28+. This type of cells is generally considered to be "young" T cells with stronger cytotoxic effects. At the same time, IL-21 will not cause the expansion of Treg cells. Because IL-21 stimulates the production of antigen-specific T cells in vitro and improves its affinity for antigens, it has become more and more widely used in immune cell therapy.

Recently, IL-21 has entered clinical testing and demonstrated safety and achievement of immunological end points, moving from Phase I safety and dosing studies to Phase II trials for selected malignancies. Like IL-2 and many of the other cytokines, initial testing has focused on renal cancer and melanoma [12] [13].

TGF-β is a cytokine that can be used as a signal by regulatory T cells (Treg) to avoid immune cells to attack normal cells in the body. TGF-β is also a widely studied cancer cytokine. Malignant tumors will release large amounts of TGF-β, allowing cancer cells to divide rapidly, while suppressing the killing of immune cells by Tregs.

Three mammalian TGF-β isoforms have been identified, including TGF-β1, TGF-β2 and TGF-β3. In normal adult tissues, TGF-β1 is the predominant isoform, whereas the expression of TGF-β2 and TGF-β3 is much lesser. The TGF-β2 isoform is specifically overexpressed in malignant gliomas. The increased levels of TGF-β2 are associated with disease stage and cause immune-deficiencies in patients [14]. Trabedersen is a synthetic antisense oligodeoxynucleotide designed to block the production of TGF-β2. In a Phase IIb trial, the survival of patients with brain tumors improved when they were intratumorally administered with trabedersen, as compared to patients receiving standard chemotherapy [15].

GM-CSF is one of the earliest cytokines found to have an effect on dendritic cells (DCs). In DCs culture, GM-CSF is to promote the differentiation of monocytes into macrophages and promote the expression of MHC class II molecules on the cell surface. It also can recruit and activate antigen-presenting cells, which process and present tumor-derived antigens to promote an effector T cell response. In addition, GM-CSF can also promote the survival of DCs. GM-CSF has shown to activate immune responses in various tumor models. The anti-tumor activity of GM-CSF comes from its biological function of activating macrophages and DCs.

GM-CSF can also promote the maturation of DC cells, promote the up-regulation of costimulatory molecules and the expression of CD1d receptors, thereby participating in antigen presentation functions. Early research indicated that CD4+ and CD8+ T cells are involved in the anti-tumor immunity activated by GM-CSF. Recent studies have shown that NKT plays an important role in the anti-tumor activity of GM-CSF.

[15] Vallieres L. Trabedersen, a TGFbeta2-specific antisense oligonucleotide for the treatment of malignant gliomas and other tumors overexpressing TGFbeta2 [J]. IDrugs. 2009, 12:445-453.