1. What is Acute Inflammatory Disease?

3. What is Chronic Inflammatory Disease?

1. What is Acute Inflammatory Disease?

Acute inflammation is usually characterized by pain, heat, redness, swelling and loss of function. These symptoms are due to the increased blood flow and increased permeability of the vasculature which are bringing the neutrophils to the affected site as rapidly as possible. This protects the injured areas from further harm while the body goes into overdrive to fend off bacteria, viruses, pathogens, damaged cells, or other irritants. It not only kills off the invaders, but damaged tissue as well, until your body wins the battle.

As mentioned before, cytokines are small proteins produced by cells, and mediate between other cells for normal functioning by reacting with certain cell receptors. In the case of inflammation, certain cytokines trigger responses to fight infection or injury. The body responds by targeting the injured or infected area with other cells to fight the damage. Figure 1 shows several cytokines involved in the acute and chronic inflammatory diseases. 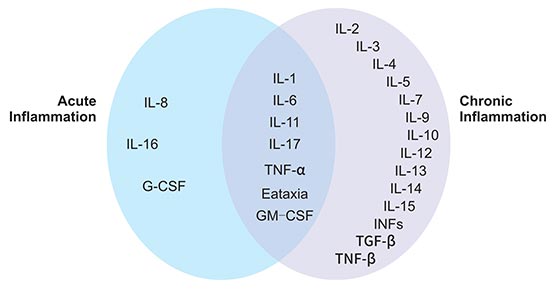 Leukocyte migration from the peripheral blood to extravascular sites is a key feature of the inflammatory response. TNFα is secreted by both immune and parenchymal cells at sites of inflammation and can promote immune cell extravasation by activating endothelial cells to express adhesion molecules for immune cells. TNFα in some sense are master regulatory of inflammation as they induce the expression of many other inflammatory cytokines and chemokines. TNFα and IL-1 share several pro-inflammatory properties. Like IL-1, TNFα can induce fever, either directly via stimulation of PGE2 synthesis by the vascular endothelium of the hypothalamus, or indirectly by inducing release of IL-1.

Philippe A. Tessier, et al. found that administration of superantigens into the air pouch led to a rapid, transient accumulation of immunoreactive TNFα in the acute inflammation animal model induced by staphylococcal enterotoxin A (SEA, one of superantigens). In the same study, they also found that prior treatment of mice with neutralizing Abs against TNFα effectively inhibited leukocyte recruitment to the air pouch. These observations are consistent with a role for TNFα as a secondary mediator of superantigen-induced leukocyte accumulation in vivo [3] [4].

IL-1 family consists of IL-1α and IL-1β. They are primarily produced by mononuclear phagocytes, fibroblasts, keratinocytes, and T and B lymphocytes. Like TNFα, IL-1 also is one of pro-inflammatory cytokine and play a critical role in inflammation. Both IL-1α and IL-1β can trigger fever by enhancing prostaglandin E 2 (PGE2) synthesis by the vascular endothelium of the hypothalamus and can stimulate T cell proliferation. In addition, IL-1 elicits the release of histamine from mast cells at the site of inflammation. Histamine then triggers early vasodilation and increase of vascular permeability.

Acute inflammation following sterile injury is both inevitable and necessary to restore homeostasis and promote tissue repair. IL17 (IL-17A) was first identified in 1988 and was termed chicken T lymphocyte Antigen -8 (CTLA -8) as it was found in their reticuloendothelial system. Although the role of IL17 in chronic disease states, such as rheumatoid arthritis, psoriasis and cancer has been well studied, its significance in acute inflammation following surgery, sepsis, or traumatic injury has not been well studied. Recently, accumulating evidences have showed that IL17 plays a vital role in mounting a rejection response after various organ transplantations and its serum levels have also been found to be a good prognostic indicator of acute organ rejection in kidney, liver, and small bowel transplantations [8] [9] [10].

3. What is Chronic Inflammatory Disease?

Chronic inflammation, also known as prolonged inflammation, causes considerable damage to the tissues of the body and leads to a progressive shift in the type of cells present at the site of inflammation and is characterized by simultaneous destruction and healing of the tissue from the inflammatory process.

IL-4 is expressed as a 15-19 kDa protein and exists as a dimer. IL-4 is produced by CD4+ cells, mast cells, and basophils. It induces CD4+ T cells to differentiate into Th2 cells. It also acts as a B cell, T cell, and mast cell growth factor, it enhances class II MHC expression on B cells, and it promotes immunoglobulin class switching to IgG1 and IgE. IL-4 also stimulates collagen and IL-6 production by human dermal fibroblasts, and may thus play a role in the pathogenesis of fibrotic diseases such as systemic sclerosis. In rheumatoid arthritis, IL-4 appears to exhibit some anti-inflammatory properties by inhibiting the production of several pro-inflammatory cytokines such as IL-1, IL-6, IL-8, and TNF-α, by synovial membranes of rheumatoid arthritis patients.

IL-7 is a non-classical cytokine, because it is produced essentially by non-hematopoietic stromal cells and acting vitally on the majority of immune cells. IL-7 is produced by epithelial and mesenchymal cells in lymphopoietic tissues. But immune cells such as T cells, B cells and natural killer (NK) cells do not produce IL‑7, although small amounts of IL-7 could be produced by some subsets of dendritic cells. Almost all conventional mature T lymphocytes express the IL-7 receptor (IL-7R), with the exception of naturally-occurring regulatory T-cells (Treg), constituting a rare opportunity to selectively strangle pathogenic effectors while preserving crucial natural regulators.

Based on this concept, many preclinical studies in rodents have highlighted that targeting the IL-7/IL-7R pathway holds promise for the treatment of IMID or to prevent transplant rejection and has the potential to restore immune tolerance. Deregulated IL-7/IL-7R signaling and numerous increased risk association with IL-7R polymorphisms have been observed in patients suffering from IMID (such as multiple sclerosis, type 1 diabetes, rheumatoid arthritis, inflammatory bowel diseases) [14].

IL-9 was first discovered as a 30- to 40-kDa protein derived from murine helper T cell clones after stimulation with concanavalin A [15]. A human homologue of IL-9 was discovered and it was found that this cytokine is also produced by activated human T cells. Recent studies have highlighted a crucial regulatory role of the cytokine IL-9 in the pathogenesis of many chronic inflammatory and autoimmune diseases ranging from inflammatory bowel diseases and multiple sclerosis to lupus erythematosus, food allergy and asthma [16] [17] [18]. IL-9 activates various types of immune and non-immune cells carrying the membrane bound IL-9R. IL-9 signaling plays a pivotal role in controlling the differentiation and activation of these cells by inducing the Jak/STAT pathway.

In particular, IL-9 induces activation of T helper cells and affects the function of various tissue resident cells in the mucosa. Importantly, recent findings suggest that blockade of IL-9 signaling is effective in treating experimental models of autoimmune and chronic inflammatory diseases.