As you know, cytokines provide cells with the ability to communicate with one another and exert complex multicellular behavior. Neuroinflammation is a common feature of neurological disorders in the brain, including Alzheimer's disease (AD), amyotrophic lateral sclerosis (ALS), Parkinson's disease and Huntington's, etc. It is a complex response to brain injury, and often companied by the release of proinflammatory cytokines and chemokines. This review focus on the role of pro-inflammatory cytokines produced by neuroinflammation.

1. What are The Sources of Neuroinflammation?

1. What are The Sources of Neuroinflammation? 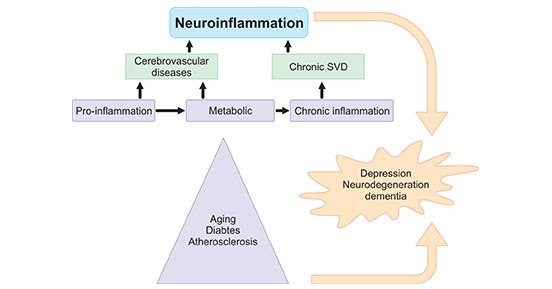 *This diagram is derived from reference 1. [1]

The cellular and molecular mechanisms of neuroinflammation are likely the same in aging and metabolic diseases such as hypertension, diabetes, depression, dementia or after cerebral insult [2], and are considered as silent contributors of neuroinflammation. Take the elderly as an example, inflammatory mechanisms are associated with the pathogenesis of dementia and functional impairment. Systemic and local CNS inflammation significantly leads to cerebral small vessel disease (SVD)-vascular dementia [3] [4], hypothesized as microvascular changes that result in a state of chronic hypoperfusion, contributing to continuous oligodendrocyte death and the consecutive degeneration of myelinated fibers that increase low-grade inflammation amplification of the risk of stroke [5].

Classically defined neuroinflammatory conditions, as observed in inflammatory demyelinating diseases (for example, multiple sclerosis) and infections (bacterial and viral encephalitis), are characterized by leukocytes invading the CNS parenchyma and a drastic loss of blood–brain barrier (BBB) integrity. Here, lymphocytes and myeloid cells are the main mediators of tissue damage and deliver cytokines to the tissue, fuelling the inflammatory cascade. Recent studies have revealed that many proinflammatory cytokines released in neuroinflammation are key players in neuroinflammation mediated by invading leukocytes, involving IL-23, IL-6, IL-1β, IFNγ, TNF, and GM-CSF [6] [7] [8]. IL-1β and IL-6 can be sensed by all cells in the inflamed CNS and are central to the inflammatory process. IL-23 is sensed by T cells, fuelling their pathogenic signature. Granulocye–macrophage colony-stimulating factor (GM-CSF) in turn licenses inflammatory monocyte-derived cells to cause tissue damage [9]. 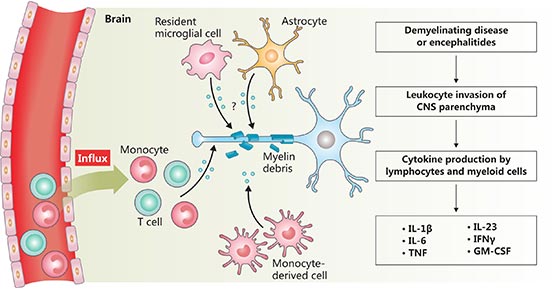 Figure 2. The diagram of neuroinflammation

*This diagram is derived from reference 9.

IL-23, a heterodimeric cytokine is composed of the p19 subunit unique to IL-23 and the p40 subunit common to IL-12. It is primarily produced by antigen-presenting cells (APCs) in secondary lymphoid tissues such as macrophages, dendritic cells, and microglia. IL-23 serves to polarize differentiating T cells toward different effector function phenotypes, such as IL-17-producing T helper (Th17) cells [10]. Accumulating studies have demonstrated that the IL-23/Th17 axis is thought to play a critical role in neuroinflammation [11].

Blockade of IL-23 ameliorates experimental autoimmune encephalomyelitis, an animal model of multiple sclerosis (MS), which is an inflammatory demyelinating disease of the central nervous system [12]. It is generally accepted that MS begins with the formation of acute inflammatory lesions that were mediated by autoreactive T cells and B cells because of the breakdown of the blood–brain barrier (BBB). The demyelinating plaques were dominated by activated T cells and macrophages associated with oligodendrocyte destruction. YuhongYang et al. have reported that IL-23-driven Th-17 cells is believed to contribute significantly to the pathogenesis of MS and EAE [13]. Moreover, Li et al. reported that activated macrophages/microglia produce IL-23 p19 in active and chronic active multiple sclerosis lesions [14].

As mentioned before, neuroinflammation is commonly seen in the postmortem brains of AD patients [15]. Accumulation of β-amyloid (Aβ) remained the hallmark in AD pathology. Many researches have confirmed that Aβ can induce expression of IL-6 in astrocytes and microglia in culture [16]. In hippocampal neurons, Aβ and IL-6 were both able to induce synaptic dysfunction [17].

AD is accompanied by a rise in IL-6 levels in the very early stage of AD, but it cannot be used as a biomarker because it is also increased with mere age. Both astrocytes and microglia can produce this cytokine and, at the same time, IL-6 induces their proliferation and activation and enhances the production and release of inflammatory mediators: prostaglandins, cytokines, chemokines and acute phase proteins, like APP. Moreover, IL-6 upregulates the cdk5/p35 complex which is involved in the hyperphosphorilation of Tau protein.

IL-1β is intimately involved in elaboration of acute neuroinflammatory processes in vivo. Exposure of the rodent brain to IL-1β elicits rapid, robust activation of both astrocytes and microglia. Importantly, IL-1β is capable of triggering further increases in its own expression as evidenced by murine IL-1β induction following human IL-1β administration or expression in the brain [19]. By feeding back upon itself, small localized elevations in IL-1 may be sufficient to drive potent neuroinflammatory changes in the brain.

IFNγ, a pro-inflammatory cytokine, is not only produced by a restricted set of peripheral cells, such as T lymphocytes, natural killer (NK) and NKT cells, but also by central nervous system (CNS) cells in response to specific stimuli. Because T, NK and NKT cells are scarce in healthy brain parenchyma, IFNγ is thought to only play a role in brain function under pathological conditions such as CNS infections, inflammatory diseases, trauma and stroke [20]. More recently, Sun L et al. have reported that anti-IFN-γ antibodies exacerbate the acute course of neuroinflammation and lead to neurocyte apoptosis in vivo. The pro-inflammatory cytokine IFN-γ provided neuroprotection during acute neuroinflammation via induction of astrocyte-secreted IL-6 [21].

TNF, also called TNF-α, is a potent mediator of inflammation, as well as many normal physiological functions in homeostasis and health and antimicrobial immunity. neuroinflammation refers to inflammation associated with the brain and is characterized by the activation of microglia and expression of major inflammatory mediators without typical features of peripheral inflammation such as edema and neutrophil infiltration [22].

NFκB is one of the most important transcription factors that activate transcription of many proinflammatory genes, and the unraveling of TNF-α induced NFκB activation forms the foundation of TNF-α as major cytokine of neuroinflammation. It is well documented that TNF-α induces at least five different types of signals that include activation of NFκB, apoptosis pathways, extracellular signal-regulated kinase (ERK), p38 mitogen-activated protein kinase (p38MAPK), and c-Jun N-terminal kinase (JNK) [23] [24].

MS is the prototypical inflammatory disease of the central nervous system (CNS). MS lesions harbor different immune cells, but the contribution of individual cell types to disease etiology. In experimental autoimmune encephalomyelitis (EAE), auto-reactive helper T (Th) cells instigate CNS inflammation by acting on myeloid cells via the production of granulocyte-macrophage colony-stimulating factor (GM-CSF) [25]. Moreover, GM‑CSF is the communication conduit between T H cells and myeloid cells. GM-CSF is the cytokines produced by pathogenic T H cells in response to IL-23R engagement. Although historically the discovery that GM-CSF deficiency results in EAE resistance IL7 preceded the studies regarding the role of IL-17 in neuroinflammation, only recently has the connection between T cell-derived GM-CSF and disease progression been made.