Everybody has red blood cells (RBCs) and white blood cells (WBCs) in their circulation. RBCs give the blood its color. WBCs are the cells of the immune system that are involved in protecting the body against both infectious disease and foreign invaders, and the lymphocyte is one of them. Lymphocytes are important in health and disease, and can produce cytokines, which are small proteins that are important for immune system responses, inflammation, and infections. These cytokines are also called lymphocytes cytokines. Before knowing the lymphocytes cytokines, we introduce the function and types of lymphocytes at first.

What is The Function of Lymphocytes?

What are The Types of Lymphocytes?

According to the migration, surface molecules and functions of lymphocytes,lymphocytes can be divided into T lymphocytes (T cells), B lymphocytes (B cells) and natural killer (NK) cells (Figure 1). Both T cells and B cells are antigen-specific lymphocytes, and their original source is the same, both from hematopoietic tissues. T lymphocytes circulate to the thymus with blood and mature under the action of thymic hormones, while B cells differentiate and mature in the bone marrow.

T cells destroy the body's own cells, including cancerous cells or those that have been taken over by viruses. B cells produce antibodies. The antibodies attack cells foreign to the body. NK cells kill tumor cells and virus-infected cells. Among of them, T cells and B cells are the two main types of lymphocytes. 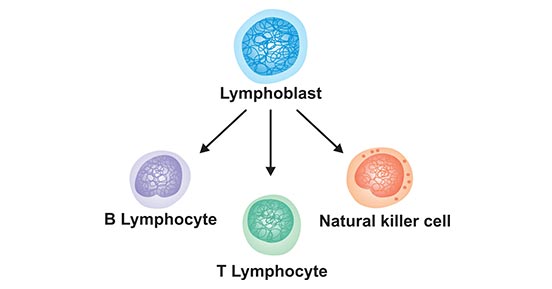 Figure 1. The types of lymphocytes

What Kinds of Cytokines Produced by Lymphocytes?

Cytokines Produced by B Cells

Except for presenting antigen, B cells can also influence immune responses by producing cytokines. But note that, the ability to produce cytokine of B cells depends on their differentiation state and activation conditions, the native activated B cell can not produce cytokine. It has been known for many years that normal human and murine B cells produce a wide array of cytokines including suppressive cytokines like IL-6, IL-10 and TGFβ1, polarizing cytokines such as IL-4, IFN and IL-12 and lymphoid tissue-organizing cytokines like TNFɑ and lymphotoxin.