Learn to Distinguish Moles from Melanomas

Figure 1 The diagram of melanocytes

3. How to Prevent Melanoma?

4. How to Diagnose Melanoma?

At present, the etiology of melanoma has not been fully elucidated, and the main cause of malignant melanoma is the uncontrolled and abundant proliferation of melanocytes.

The occurrence of melanoma is the result of multiple factors such as genes, environment and gene/environment. The main risk factors for melanoma include the following:

Ultraviolet radiation is closely related to the development of melanoma. It was found that UVB acted on the pyrimidine ring of DNA, causing mutations in the pyrimidines [3], thereby damaging DNA. UVA leads to damage and fracture of DNA through the production of reactive oxygen species (ROS), and finally produces gene mutation [4].

Skin cancer begins when ultraviolet light damages the DNA of genes that control the growth of skin cells.

Approximately 10% of melanoma patients have a family history. It may be due to a shared family lifestyle, certain genetic changes (mutations) in the family, or a combination of factors. Familial (hereditary) melanomas are most commonly associated with alterations in tumor suppressor genes.

Nevus are also called moles. In general, most moles never cause any problems, but people with a lot of moles are more likely to develop melanoma. Especially atypical moles (dysplastic moles).

How do you know if your mole is normal? You can refer to the ABCDE rules.

A (Asymmetrical): Common moles are round or oval, relatively symmetrical structure.

Malignant moles are usually irregular and asymmetrical in shape.

B (Border irregularity): The border of the melanoma is irregular, jagged, notched or blurred. These indicate that it may infiltrate and invade surrounding tissues.

D (Diameter): Moles larger than 6 mm in diameter should be closely observed.

E (Evolving): The size, shape or color of the moles varies with time.

Whites are at a much higher risk of developing melanoma than African Americans. People with red hair or blond hair, blue eyes or green eyes, people with freckles or burned white skin are at higher risk.

People with weak immune systems are more likely to develop melanoma. For example, People who receive organ transplants and are infected with HIV tend to have weaker immune systems and a higher risk of melanoma.

1.6 Personal History of Melanoma or Other Skin Cancer

Xeroderma pigmentation (XP) is an inherited disease that affects the ability of skin cells to repair damage to their DNA. XP patients are at high risk of melanoma and other skin cancers when they are young, especially in areas exposed to sunlight.

Melanomas are more likely to occur in older people, but are also found in younger people. 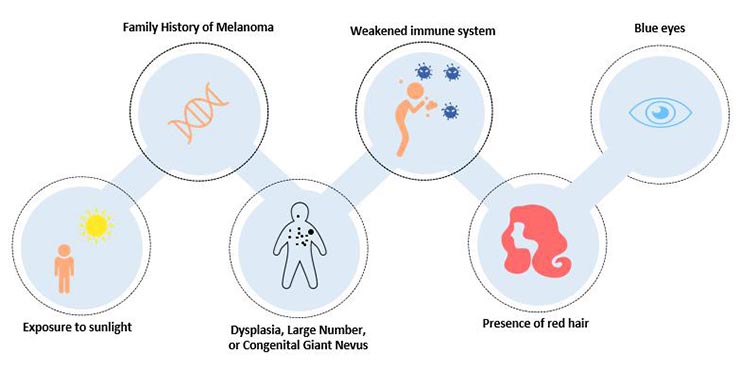 Abnormal activation of signal transduction pathways, such as mitogen activated protein kinase (MAPK), phosphoinositol 3 kinase (PI3K) and Wnt/β-catenin pathway, may be an important factor in inducing melanoma invasion and metastasis [6]. In addition, TGF-β/BMP may play an important role in the growth and metastasis of malignant melanoma.

MAPK signaling pathway plays a crucial role in the occurrence and development of melanoma, and is an important clinical target for the treatment of melanoma. In melanoma, the activation mutations of B-RAF and RAS genes promote the proliferation, invasion, migration, survival and angiogenesis of tumor cells [7]. In addition, ERK 1/2 was consistently and significantly activated in melanoma cells [8], whereas only low levels of activation were observed in melanocytes.

The PI3K pathway is one of the most important pathways in cancer metabolism and growth. The activity of PI3K-Akt3 pathway is malregulated in most melanomas. Targeting Akt3 and downstream PRAS40 has also been shown to inhibit melanoma tumours in mice.

TGF-β is widely present in malignant melanoma cells, of which TGF-β1 is particularly prevalent [10]. As a member of the TGF-β superfamily, BMPs are important factors influencing the migration and invasion of melanoma cells.

Studies have shown that TGF-β/BMP signaling pathway may play a key role in the growth and metastasis of malignant melanoma.

3. How to Prevent Melanoma?

Check Skin: Check your skin regularly for changes in the number, size, shape, or color of spots. After taking a shower or shower, check for any moles from the top of your head to your toes.

4. How to Diagnose Melanoma?

For suspected skin lesions, the ABCDE standard can be used for judgment. Biopsies are required in patients with high suspicion of malignant melanoma damage. If necessary, it can be examined and diagnosed by immunohistochemical staining. For example, S-100, HMB-45 and vimentin are specific indicators for the diagnosis of melanoma.

Histopathology can be graded according to biopsy results.

At present, the clinical tissue classification of melanoma adopts Clark classification [11] to classify melanoma into 5 grades according to the depth of invasion. The higher the grade, the worse the prognosis.

Clark III: the tumor is full of dermal papilla, but not to the dermal reticular layer.

For patients diagnosed with melanoma, it is necessary to further determine whether the tumor spreads and what extent the tumor has spread. This process is called staging. Proper staging helps determine the severity of the cancer and the best treatment.

The most commonly used melanoma staging system is the TNM system of the American Joint Committee on Cancer (AJCC), which includes the following three key messages:

Ulcer refers to the breakdown of melanoma on the skin. Festered melanoma tends to be worse.

There are many treatment for melanoma, and the treatment plan should be determined according to clinical stage and prognostic factors, as well as clinical factors such as patient age, functional status, tolerance and concomitant disease.

At present, different surgical methods according to the stage of the tumor are the main methods for treating melanoma.

In addition to traditional surgical treatment and radiotherapy and chemotherapy, targeted therapy and immunotherapy have become the focus of clinical research on melanoma treatment.

Although the effects of these targeted drugs are significant, most patients develop resistance soon.

In addition, studies of co-stimulatory pathways OX-40 (CD134) and 4-1BB (CD137) have also guided new directions in the treatment of melanoma. 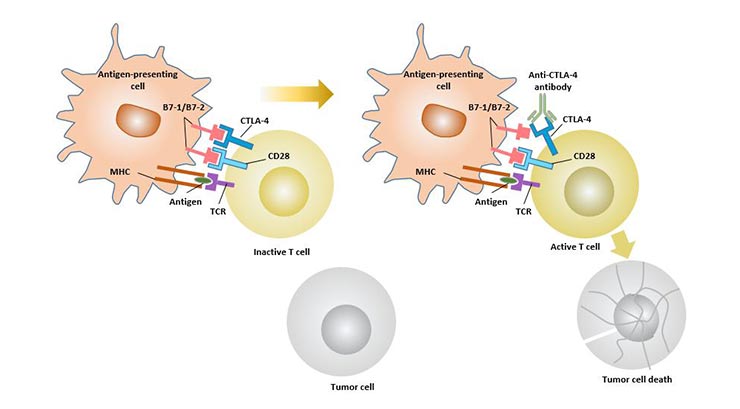