Blood-brain barrier (BBB) homeostasis is fundamental to maintaining normal physiological function of the central nervous system. Blood-brain barrier permeability is severely restricted by tight junctions and adhesion junctions in vessels of the BBB. Limited permeability restricts movement of substances from the systemic circulation to the brain which buffers the brain from rapid changes in ionic or metabolic conditions. Usually, when the brain is ischaemic and hypoxic, the BBB permeability increases and CT shows enhancement, but the CT enhancement is not obvious due to excessive perfusion or slow blood flow, which makes clinical pharmacological treatment of cerebrovascular disease difficult. Therefore, the in-depth study of the blood-brain barrier provides an important theoretical basis for the diagnosis and treatment of neurological diseases.

1. What is the Structure and Function of Blood-brain Barrier?

3. What are the Current Status of Blood-brain Barrier Permeability Research?

1. What is the Structure and Function of Blood-brain Barrier?

The blood-brain barrier (BBB) is located between the peripheral blood circulation and the central nervous system (CNS). It is a selective barrier formed by capillary endothelial cells, surrounded by basal lamina and astrocytic perivascular endfeet (Figure 1). Brain endothelial cells express a number of transporters and receptors, such as EAAT1–3, GLUT1, LAT1, etc. Astrocytes provide the cellular link to the neurons [1] [2]. BBB acts as a 'physical barrier' because complex tight junctions between adjacent endothelial cells force most molecular traffic to take a transcellular route across the BBB, rather than moving paracellularly through the junctions, as in most endothelia [3]. 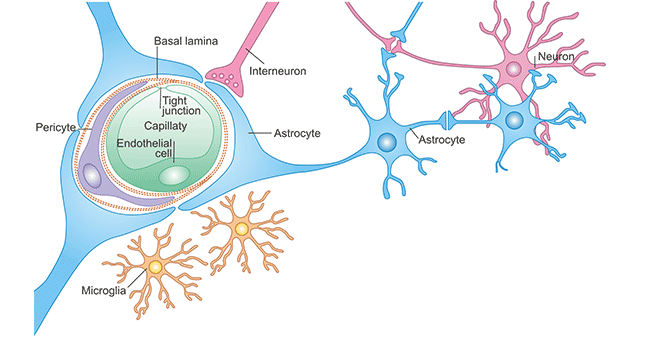 As mentioned before, BBB is a selective barrier and supplies the brain with essential nutrients and mediates efflux of many waste products. It restricts ionic and fluid movements between the blood and the brain, allowing specific ion transporters and channels to regulate ionic traffic, to produce a brain ISF that provides an optimal medium for neuronal function. More importantly, the BBB protects the brain from fluctuations in ionic composition that can occur after a meal or exercise, which would disturb synaptic and axonal signaling. The barrier helps to keep separate the pools of neurotransmitters and neuroactive agents that act centrally (in the CNS) and peripherally (in the peripheral tissues and blood), so that similar agents can be used in the two systems without 'crosstalk' [4].

Blood-brain barrier permeability controls what gets from the bloodstream into the brain, and what does not. BBB dysfunction is a significant contributor to the pathogeneses of a variety of brain disorders [5]. Many signaling factors have been identified to be able to control BBB permeability through regulating the structural components, including junctional proteins at the BBB, proteins of the basement membranes of the BBB, and signaling mediators.

3. What are the Current Status of Blood-brain Barrier Permeability Research?

In 2018, a team from the University of Pennsylvania found that the blood-brain barrier permeability is higher at night in Drosophila model. This research revealed that the permeability rhythm driven by circadian regulation of efflux and depends on a molecular clock in the perineurial glia of the BBB, although efflux transporters are restricted to subperineurial glia (SPG). These results have been published in the journal named Cell [9].

It was previously believed that the blood-brain barrier permeability increases with age, however, is this true? In 2020, Tony Wyss-Coray’s team studied the ability of plasma proteins to permeate the brains of young and old mice. Their study shows that the blood-brain barrier allows a much higher proportion of blood-derived proteins to enter the healthy brain than previously thought, and that the total amount of plasma protein entering the brain actually decreases with age [10]. The authors' findings contribute to the understanding of the brain's response to systemic protein signals and the role of the blood-brain barrier in age-related cognitive decline, as well as promising improvements in the way drugs are delivered to the brain.

The BBB is vital to CNS nutrition and homeostasis, and undergoes myriad alterations during normal aging. Recently, William A. Banks et al. found that a small increase in leakiness at the vBBB with healthy aging that correlates with some types of age-related cognitive decline. This study also revealed that most age-related changes in the blood-brain barrier are accelerated when a person carries the ApoE4 allele, the gene with the greatest risk of developing Alzheimer's disease [11]. People carrying the ApoE4 gene have difficulty clearing β-amyloid peptides from the brain, which leads to the accumulation of plaque. As we age, the pump in the blood-brain barrier becomes less efficient at clearing beta-amyloid peptides. This pump is even less effective in people with Alzheimer's disease.